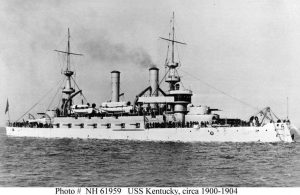 May 15, 1900 – The USS Kentucky was commissioned for service in the United States Navy. The Newport News Shipbuilding Company of Virginia laid down her keel on March 30, 1896. She was launched on March 24, 1898, sponsored by Miss Christine Bradley, daughter of Gov. William O. Bradley, the first Republican governor of the Commonwealth.

The 11,520-ton battleship saw no major combat during her 20 years of service. She sailed in East Asia, the Atlantic, the Mexican coast, and finally was used as a training ship before being decommissioned in 1920. She was sold for scrap in 1923. There have been three other naval vessels named Kentucky: Confederate transport ship CSS Kentucky, another USS Kentucky that was under construction in 1947 when her contract was cancelled, and the USS Kentucky submarine commissioned in 1991. 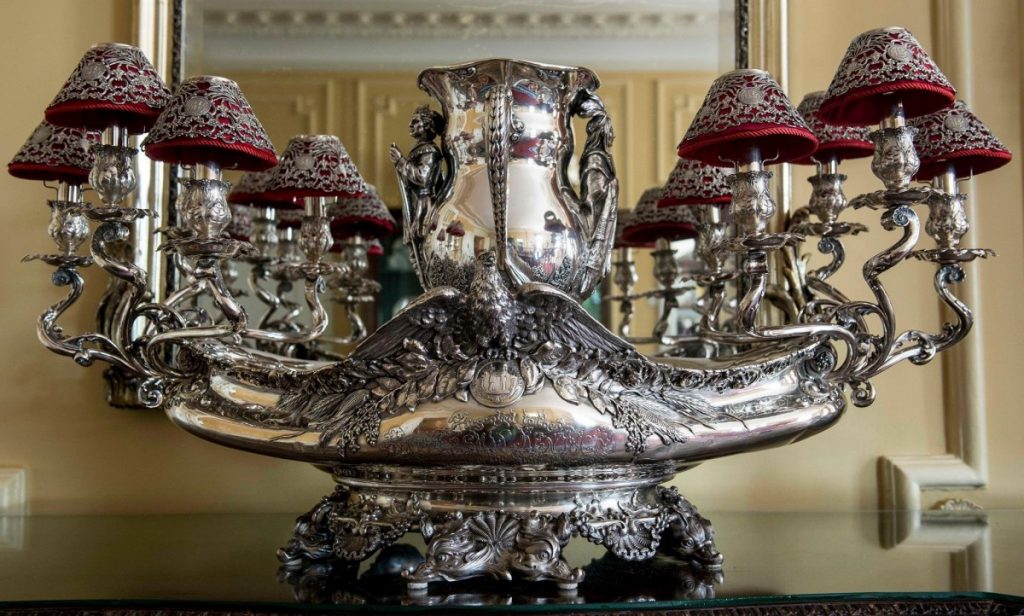 THE CENTERPIECE OF THE BATTLESHIP SILVER includes numerous representations of Kentucky along with candelabrum with matching sterling silver shades.

Perhaps the most memorable part of the USS Kentucky’s history is the impressive silver service commissioned by the Commonwealth of Kentucky for use on the battleship. Handcrafted of 2,700 ounces of silver, the 70-piece service was made by the firm of James E. Caldwell & Co. of Philadelphia at a cost of $6,000.

Each piece is unique and is a virtual celebration of the Commonwealth’s rich history. The loving cup is decorated with tobacco and other products of Kentucky. The punch bowl, with a capacity of 14 gallons, features full relief images of Daniel Boone on one end and a Native American Indian on the opposite; the ladle is etched with seaweed. The water pitcher features images of the battleship ploughing the water at full speed. 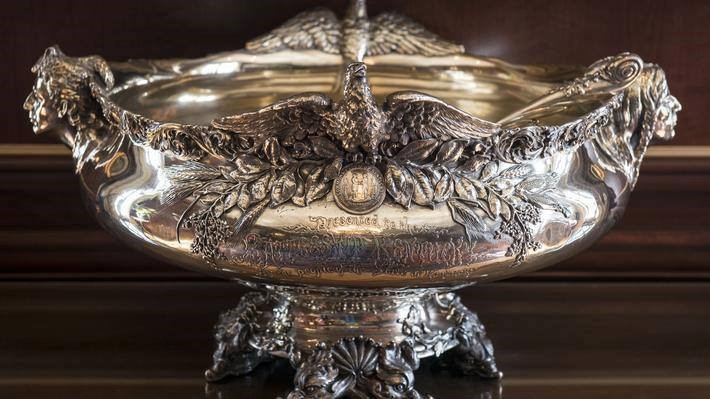 THE SILVER PUNCH BOWL features American bald eagles, the flora and fauna of Kentucky, and the likenesses of Daniel Boone and a Native American. The immense vessel holds 14 gallons of punch.

Now entrusted to the Commonwealth of Kentucky, the silver service has been the subject of far greater battles over where the historic items should be displayed: the Kentucky History Center, the Kentucky Military History Museum, or the Governor’s Mansion. Three pieces are now aboard the new USS Kentucky – a nuclear submarine – USS Kentucky SSBN-737.

A portion of the cancelled 1947 USS Kentucky is berthed in Norfolk, Virginia as part of the USS Wisconsin. The original bow of the Wisconsin was severely damaged in a collision. Rather than manufacturing an entirely new bow, the bow from the Kentucky was used as a replacement. Ever ready to add a unique nickname to their vessels, many sailors have referred to the USS Wisconsin as “Wisky,” derived by using WIS from Wisconsin and KY from Kentucky. 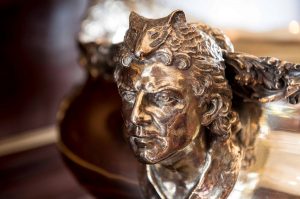 ONE SIDE OF THE PUNCH BOWL features the likeness of explorer Daniel Boone. 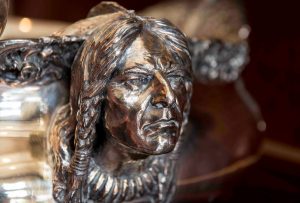 ANOTHER SIDE OF THE PUNCH BOWL features the likeness of a Native American representing in the inhabitants of Kentucky prior to settlement.

Sam Terry’s My Kentucky column appears weekly in Jobe Publishing newspapers in celebration of the 225th anniversary of Kentucky statehood.  Past columns can be accessed by visiting www.jpinews.com

Images of the Battleship Kentucky silver courtesy of the Commonwealth of Kentucky.