While researching my family tree, I discovered two of my ancestors ran a grist mill on Peter’s Creek. Britt and Powell’s Mill was owned and operated by Isaac D. Powell (my 3rd great grandfather) and Nelson Britt (who I believe to be John Nelson Britt, my 2nd great grandfather). From a newspaper article dated January 27, 1886 the “dam was broke and washed away by floating ice.” After Isaac’s death it was known as Britt’s Mill. From another newspaper article on June 02, 1897, the mill had been in operation for about 45 years, but the mill stones were much older, having come from a mill operated by Jack Lewis at Hudson’s Ford on Skaggs Creek. That mill operated at least as far back as the 1810s but may have been used to grind corn for over 100 years. The article further stated that Nelson Britt was well known for “grinding corn meal that has the reputation of being the best in Barren County.”

All these revelations reminded me of “interviewing” my cousin, Robert Britt, a while back and stories he told me about taking corn to the mill, so I got out my recorder to jog my memory. Robert remembered when he was a boy, Pauline and Brice Taylor ran a grist mill and hammer mill at Pauline’s father’s (Luther Allen’s) store at Allen’s Crossroads. Robert said his Dad (my great Uncle John Britt) had shelled some corn and put it in a long sack. Uncle John draped the sack of corn over the back of his “sharp backed” mule named Mike, in such a way it was balanced evenly on both sides. Uncle John picked up Robert and sat him on top of the sack and off Robert rode to the mill at the crossroads. When he arrived at the mill, they slid him off, took the sack inside and ground it into meal. They put the corn meal into a sack just as Uncle John had done, draping it over the mule’s back, grabbed Robert up, sat him back on the mule for the ride back home. 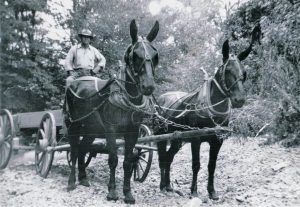 My Papa (Luther Garlin Powell) with a mule team and wagon similar to what Robert would’ve driven to the mill.

Several years later, Robert was still taking corn to the mill, only using an old wagon and team of mules. The mules were Ol’ Blue and Minnie Pearl, which was a little mule Uncle John had bought from his brother in law, my Papa (Luther Garlin Powell), but Robert said they just called her Minnie. It was in the winter and he was taking corn to the store at Allen’s Crossroads that had been built on the corner diagonally across from where Luther Allen’s store had been (this is the same store my Aunt Neoma Elmore owned and ran decades later). At this time, the store was run by Homer Jordan which had a hammer mill in it for grinding corn into feed. He said as usual he had that old wagon overloaded and as soon as he was outta sight of his Poppa, he was running those mules wide open. After grinding the corn and reloading he ran those mules just as hard on the return trip. He said he ran so fast, the wagon began to shimmy and he had to slow down to keep from crashing.

On a particularly cold winter day, Uncle John and Robert loaded a “hog box” onto the wagon to pick up some shoat pigs from a man who lived in a big house on the right well beyond the crossroads. On the way back home, Uncle John decided to stop at the store to warm up. They pulled up beside the store and Uncle John asked Robert if he thought the mules would stand there and Robert said he reckoned they would, they always had. They were inside warming by the stove when they heard a ruckus outside. Uncle John said “the mules are running off.” By the time Robert sped out the front door, the mules were already across the intersection. He took off running in his high top four buckle over boots. When the mules heard the plop, plop, plop coming up behind them, they picked up the pace. Robert managed to kick it up enough he latched on to the back of the wagon and hung on there until he could catch his breath. He climbed over the wagon, grabbed the reins, got the mules stopped and turned around, then headed back to the store. When he got back, his Dad was standing there talking to a Mr. Humphrey, who lived at the crossroads. He told Mr. Humphrey about the mules running off, but he responded “John, them mules didn’t know they was running off, every time that boy comes up here to the store he’s running them just like that!” Uncle John told Robert about that conversation so he was expecting to get a “whooping,” but his Poppa was apparently so glad the mules hadn’t run off “of their own volition,” he never got punished. Uncle John ran those mules so hard on the way home, they never wanted to run off again.