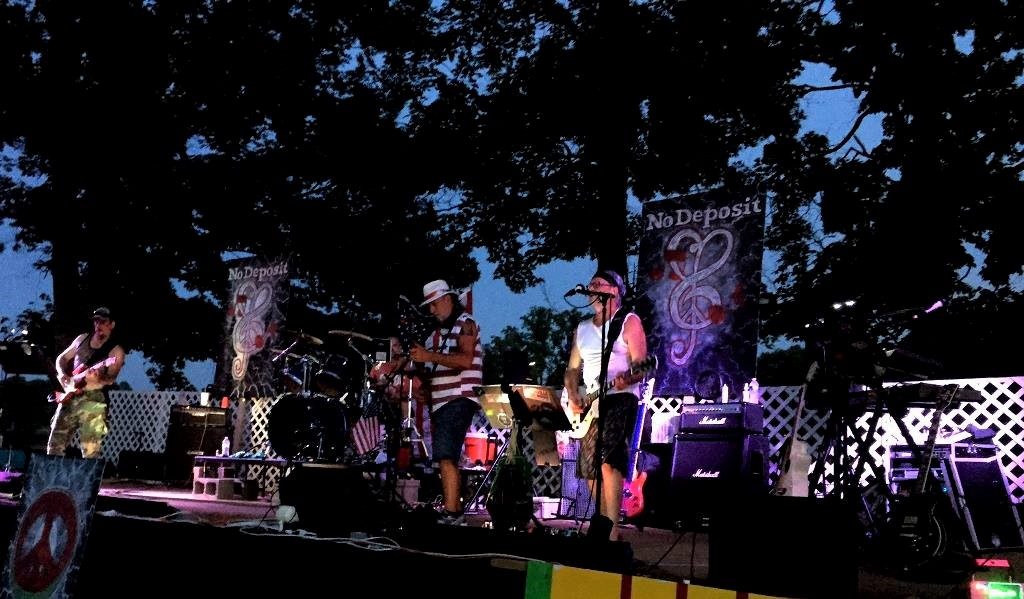 Note: This article was originally published in March, focused on the No Deposit Band’s benefit for the Monroe County Relay for Life. It’s being published to our website for the first time, updated to reflect the band’s concert this weekend, which will benefit the effort to bring the Vietnam Memorial Traveling Wall to Tompkinsville in September.)

Back in 1969, at the peak of the rock-n-roll revolution, some local boys came together to play rompin’, stompin dance music for their peers and had an absolute blast. In 1974, on the cusp of manhood and marriage and day jobs, they went their separate ways.

But they never forgot that feeling. Back together since 2013 and going strong, the No Deposit Band will bring their straight-outta-Tville brand of warmhearted wild to the National Guard Armory this Saturday night for an evening that will have you up on your feet and singing along.

“I grew up on the corner of Main and Pedigo,” says Jack “Kan-Man” Dodson, one of the three core members.. “It used to be a Norman Rockwell scene. When we got started, I was about 13, Jackie Hagan was 12, and Mark Wheat would have been 14. Mark learned to play a little guitar and talked Jackie into starting a band. I said no at first. But they had nowhere to rehearse, so I said, why don’t y’all just come to my basement. That was when they talked me into grabbing this bass and amp that my mom had, and I just started in.”

Dodson’s mom, born into a musical family, played guitar, mandolin and piano. Jack played trumpet with the school band. No Deposit was a little different, and caught on immediately with the neighborhood youth. “Our first public concert, we played for all the kids in the neighborhood. We only knew maybe five to seven songs, but we played those songs for two hours to around 20, 30 kids. We had a big time! Such a good neighborhood.” Walking everywhere they went, the budding rockers scraped together the funds for lessons and equipment from picking up soda bottles, and ‘No Deposit’ they became.

As the boys got old enough to drive, they started ranging farther afield, playing gigs with a slightly older band called Blue Glass led by P-Nut Hagan. “They were ‘the’ band before we were, and they used to let us come along and play when they took a break,” Dodson remembers. No Deposit started playing their own post-game school dances at the Armory, and eventually took over the running of downtown venue The Scene from Blue Glass.

“The Scene was the best thing that happened to T-ville for a long time,” reminisced a poster on the Topix internet forum in 2008. “Everyone had a place to come together. And… they did! It kept us all off the streets and we had a ball.” One of the bands that played the Scene, the Itchy Brothers, would go on to international renown after becoming the Kentucky Headhunters.

In 1974, graduating from high school and facing adult responsibilities, Dodson and Hagan and the others hung up their instruments, never expecting to be in a band again. Then, in 2012, Wheat ran into Dodson at the Watermelon Festival. “He asked me, if they got the band back together, was I in? My wife Tammy said, ‘So what are you gonna do?’ but I figured he was just talking. Then he called, so we started back up in 2013. I hadn’t picked up a bass in 39 years, but we’re having more fun than ever, and we sound better than ever too.”

From VFW halls to Kentucky Downs, at benefits, bars and celebrations, fans old and new have come out to relish the band’s classic repertoire of anthems like “All Right Now” and “Born To Be Wild.” “We don’t play country, because it lacks that boom-boom punch,” says Dodson. It’s not that he lacks respect for country; he’s seen Willie Nelson five times, but No Deposit has a pact with their audience. “Every song on our set list is one you can dance to, and you’ll know the words. There’s nothing like looking out into the audience and seeing people singing along.”

The lineup has shifted over the years; currently steady members are Dodson, Hagan and Jason Bow on drums. Others join in as special guests from time to time.

Come down to the Armory this Saturday, May 5 for a concert and dance that starts at 7 p.m., runs to 10 and will be preceded by a cakewalk and silent auction. Expect special guests and surprises of all sorts. Admission is $5, free for kids under 12. To learn more about No Deposit, including a lot more about Tville’s music scene in the Golden Age of Rock, visit www.nodepositband.com.