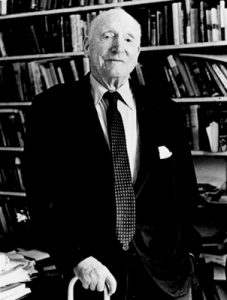 Robert Penn Warren, who would become a Pulitzer Prize-winning novelist, poet, and literary critic was born in Guthrie, Kentucky on April 24, 1905. While Warren is one of the Commonwealth’s most accomplished offspring, one of his most popular books, World Enough and Time (published 1950) is based on a dramatically tragic affair that shocked Americans of the 1820s.

Often referred to as “The Kentucky Tragedy,” the tale centers on Jereboam O. Beauchamp, a lawyer in Glasgow; Anna Cooke, a member of a well-to-do family that lived near Oakland in Warren County; and Col. Solomon Sharp, who once represented Warren County in the Kentucky legislature, represented Kentucky in the U.S. House of Representatives, and served as the Commonwealth’s Attorney General. 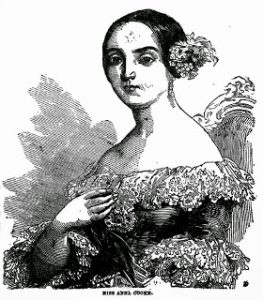 In 1820, 35-year old Anna Cooke was unmarried and gave birth to a stillborn illegitimate child. She claimed that Solomon Sharp had seduced her and was the father of the child. Sharp denied the accusation and Anna withdrew from society in shame. Cooke alleged the child was conceived on Sunday, September 16, 1819 while Sharp’s wife, Eliza, was attending a church service.

Jereboam O Beauchamp was a young attorney in Glasgow and while he was considered brilliant, he had been charged with fathering an illegitimate child by age 18 and was rumored to have fathered others. His detractors described him as “wild, lascivious, revengeful, unprincipled and shameless.” 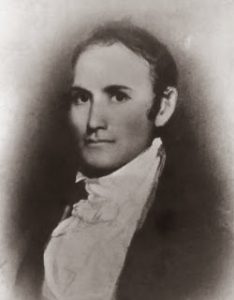 Beauchamp was an admirer of Sharp for his success as a lawyer and his celebrity as a well-connected political figure. He became infatuated with the reclusive Anna Cooke and was determined to meet her. He accomplished his mission under the guise of borrowing a book.

Finding a mutual interest in romantic novels and poetry, Beauchamp continued visiting Anna and despite being some 16 years her junior, wished to marry her. Anna suggested that in order to marry her, the husband-to-be would have to kill Solomon P. Sharp who had left her in a life of shame. Beauchamp accepted the challenge.

While Sharp still had not succumbed to Anna’s revenge, Anna married Jereboam O. Beauchamp in 1824. At the time, Sharp was Kentucky’s Attorney General and the following year he was campaigning for a seat in legislature. His political enemies eagerly shared the tale of Anna Cooke and the stillborn child in hopes of dashing his political aspirations. Sharp denied the rumors and claimed that the midwife present when the child was delivered stated the baby was mulatto, insinuating the father was a Negro slave.

Beauchamp travelled to Frankfort where Sharp and his family was living. On November 6, 1825, he disguised himself with a mask when he knocked on the front door of the Sharp home at 2 a.m. When Sharp answered the door, there was a brief struggle before Beauchamp plunged a large dagger into the victim’s body, saying, “Die, you villain!” 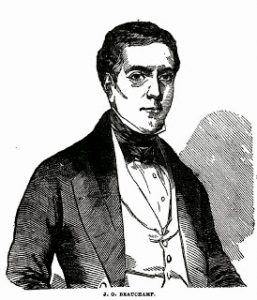 After a 13-day trial in Frankfort, Beauchamp was found guilty of murder and sentenced to death by hanging. Anna insisted on staying with her husband in his jail cell. Together, they wrote The Confession of Jereboam O. Beauchamp which they hoped would be published and would save Beauchamp from being put to death. While the document admitted guilt, the couple wove a romantic story they believed would show Beauchamp was justified in killing Sharp and cause Governor Joseph Desha to commute the sentence.

Having no success getting the confession published, the couple was accused of attempting to bribe a guard to help them escape. They sent a plea Gov. Desha for a stay of execution which was denied on July 5. Anna and Jereboam decided to commit suicide together. After writing detailed instructions for their burial, the couple drank laudanum which Anna had smuggled into the jail concealed in her bosom. Their efforts were in vain as both lived.

With the execution scheduled for July 7, the couple revived their plan for suicide. Anna took another large dose of laudanum but could not keep it down, so she stabbed herself in the abdomen with a knife she had smuggled into the cell. Jereboam did likewise. As Anna was dying her ill-fated husband kissed her lips and uttered “For you I lived – for you I die.”

Fearful that Jereboam Beauchamp would bleed to death before he could be hanged, he was quickly taken to the gallows. Some 5,000 people had gathered in downtown Frankfort to witness the hanging – the first legal execution by hanging in Kentucky. Beauchamp assured attending clergy that he’d had a salvation experience the previous day and asked the 22nd Regiment musicians play Bonaparte’s Retreat from Moscow. At the gallows, he was too weak to stand and was held upright while the noose was placed around his neck. 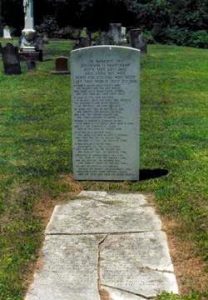 The Beauchamp grave with Anna’s epitaph engraved on the stone.

Beauchamp’s father took charge of the bodies of Anna and Jereboam. Per Jereboam’s written instructions, they were interred in a single coffin in which “we wish to be placed with my wife’s head on my right arm, and that confined round upon her bosom.” A month before their deaths, Anna wrote a 32-line epitaph for their tombstone in Maple Grove Cemetery in Bloomfield.

Beauchamp’s confession document was published later the same year. A collection of Anna’s letters was also published although their authenticity was contested. Dr. Leander Sharp wrote Vindication of the character of the late Col. Solomon P. Sharp, hopeful it would remove the tarnished image of his late brother. The document was not published due to multiple threats from individuals mentioned in the document; it was found in the Sharp home decades later. The tragedy caught the attention of Edgar Allen Poe and inspired his unfinished play, Politian. At least nine other literary works by various authors were based on the infamous Kentucky Tragedy.