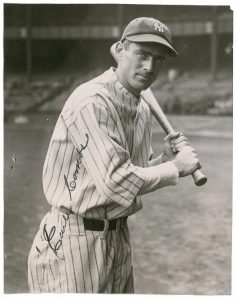 On April 16, 1925, Earle Bryan Combs, a native of Pebworth in Owsley County, Kentucky made his debut with the New York Yankees, beginning a major league baseball career that would last until 1935. Combs began playing baseball as a youngster using tree limbs and balls made of string. As a student at Eastern Kentucky State Normal School, he played in a student-faculty game and his performance caused others to encourage him to play for the school.

While a teacher in one-room schools, Combs played for High Splint (the Harlan County Coal Company’s team), the semi-pro Lexington Reos, and finally the Louisville Colonels whose managers offered him a contract paying him more than the $37 per month he earned teaching school. His demeanor both on and off the field earned him the nickname, “the Kentucky Colonel.” 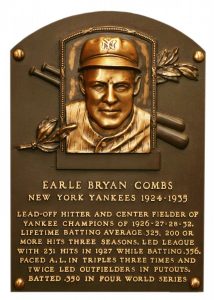 In 1934 he suffered severe injuries when he crashed into an outfield wall. The following year Combs was injured once again and was forced to retire, relinquishing his center field position to Joe DiMaggio whom he advised in becoming a baseball star.

Combs worked as a coach for the next 20 years, working for the Yankees, the St. Louis Browns, the Boston Red Sox, and the Philadelphia Phillies. He was inducted into the Baseball Hall of Fame in 1970.

Sam Terry’s My Kentucky column appears weekly in Jobe Publishing newspapers in celebration of the 225th anniversary of Kentucky statehood.  Past columns can be accessed at www.jpinews.com/mykentucky