There are few bonds as close as a boy and his dog. Who has not seen videos of a young boy laughing and romping as his four-legged best friend jumps and bounces at his side, intently watching the little imp’s every move, patiently waiting for an opening to attack his face with a wet, sloppy kiss. Dogs are loyal to a fault and always happy to see their “best buddy.” Dogs seem to always be in a good mood and eager for attention, unlike their feline counterparts who are sometimes finicky and seemingly moody. 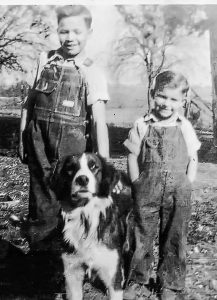 My Dad (G.D. Powell) and Uncle Everett Powell with their dog.

According to some researchers, dogs became domesticated between 27,000 and 40,000 years ago, in China, the Middle East and Eastern Europe. The prevalent theory is that gray wolves were probably the origins of the first domesticated breeds. These gray wolves began coming near human camps looking for food scraps to scavenge and over time followed nomadic tribes from camp to camp. According to experts, it takes about six generations to fully domesticate a wild canine bloodline. There is actually scientific evidence of the close bond between dogs and humans. As reported in a study, when humans look into each other’s eyes they bond emotionally and release a hormone called oxytocin, this same hormone is released by both humans and dogs when they look into each other’s eyes.

Like all little boys, I really, really wanted a puppy, but never had one of my own. The closest I ever came was when I was six years old. Our neighbors, the Turners, owned a bird dog which had a litter of pups. According to my Dad, these puppies were half “Sooners,” which meant that they were “mutts” as their Daddy was of unknown origin. That didn’t matter to me as they were just little bundles of joy. All the puppies were black and white, except for one male which was brown with white accent and the runt of the litter. We immediately bonded and I named him Brownie. We were inseparable and played together all the time. I begged my Mama, probably every day, to let me have him, but the answer was always an unequivocal “no.” Eventually, all the puppies had been given away, except Brownie and I knew the Turners were holding him for me just in case my Mama relented. 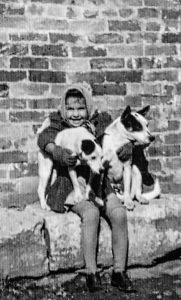 Aunt Joyce Powell Buster with two dogs at the family farm. Having dogs as best friends is not exclusive to boys.

Brownie was always waiting for me when I came out of the house in the morning and met me down the street as I walked home from school. One day as I passed the McCandless’s house, Brownie was nowhere in sight. I ran the rest of the way home yelling for him, but he didn’t come running as he had always done. I sped to the Turners’ house and knocked on the door. Betty answered my knock with her effervescent smile, which changed in an instant when I asked her if she’d seen Brownie. The look on her face told me everything, without hearing a word. She sighed and said, “I’m sorry, honey…” but I didn’t hear the rest of it as I ran away. I was devastated and burst into Mom’s beauty shop, blubbering. Mom already knew what was wrong, as the Turners had made one last plea on my behalf before they gave Brownie away. She tried to comfort me, but I cried for days. Shortly, Mom brought home a kitten, in hopes of consoling me. Mom said cats were easier to care for and could pretty much fend for themselves.

I soon developed an aversion for cats as, in my young mind, they were the reason I didn’t have a dog. I taught Tiger, the gray Tabby kitten, how to climb Mom’s beloved living room drapes. Very often Mom came into the living room and Tiger was perched on a curtain rod, looking down like a vulture. My ploy worked, Mom gave Tiger away as she just couldn’t have her drapes ruined by that “darned cat.” We then began a cycle, me begging for a dog and Mom bring home a cat. There was only one cat that I ended up getting attached to, a fluffy white Persian we named Snowball. Snowball wasn’t an ordinary cat, he acted like a dog. He came when called and was always affectionate. Unfortunately, one day he ran away and never returned. I eventually stopped asking for a dog and Mom quit bringing home cats.