On April 9, 1880 Centre College and Kentucky University (Kentucky’s A&M College that later reverted to its historic name of Transylvania University) played the first football game in Kentucky. Some historians believe it was the first intercollegiate football game played in the south, others think it was the first below the Mason-Dixon Line, and some claim it was the first south of the Ohio River. Washington & Lee University had played a football game against VMI in 1873 yet there are no player or coaching records of the game and W&L didn’t have another team until 1890.

The April 9 match in Lexington was played in a cow pasture used by A&M College of Kentucky (now the University of Kentucky) President James Patterson’s cows; the land was later used for military training during World War I and ultimately became Stoll Field. Even though the game was played on the A&M College of Kentucky campus, that school didn’t play its first football game until the next year. Kentucky University defeated Centre College 13¾ to 0. 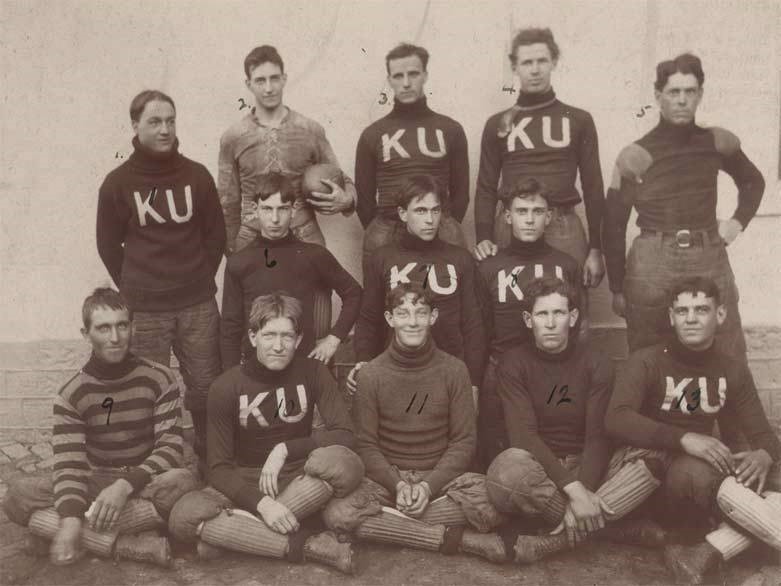 KENTUCKY UNIVERSITY’S football team of 1880 played the first football game in Kentucky when they met the Centre College team in a cow pasture later known as Stoll Field.

The Lexington Daily Transcript published the following account of the game in its Saturday, April 10, 1880 edition:
“13¾ to 0.
“The above is the result of the match game of football played yesterday afternoon at the City Park between the Centre College and Kentucky University teams. As the Danville boys had the reputation of being a splendid club, our boys expected to be beaten. The visiting club was composed of tall, athletic men, while the University Club was mostly made up of short, muscular boys, whose style of physique is considered best for such a game.
“A large crowd of ladies and gentlemen, estimated at five hundred, witnessed the game. The ladies seemed to take an especial interest in the fun, and it was pronounced that football had decidedly the advantage of baseball as a means of amusement to spectators.
“The collision between players at various times were almost equal to the coming together of two Spanish bulls, and provoked much laughter. The game lasted two hours, commencing at 4 and ending at 6 o’clock. It was played according to the Princeton Rules.
The Danville team was composed of the following young men: Fulton, Dunlap, Vaughn, Clark, McCartney, Cowan, Moore, Cowles, Barbour, Ernst, Taylor, January, Skinner, Webster, Read, Barrett and McKee.”

Sam Terry’s My Kentucky column appears weekly in Jobe Publishing newspapers in celebration of the 225th anniversary of Kentucky statehood.  Past columns can be found by visiting www.jpinews.com/mykentucky