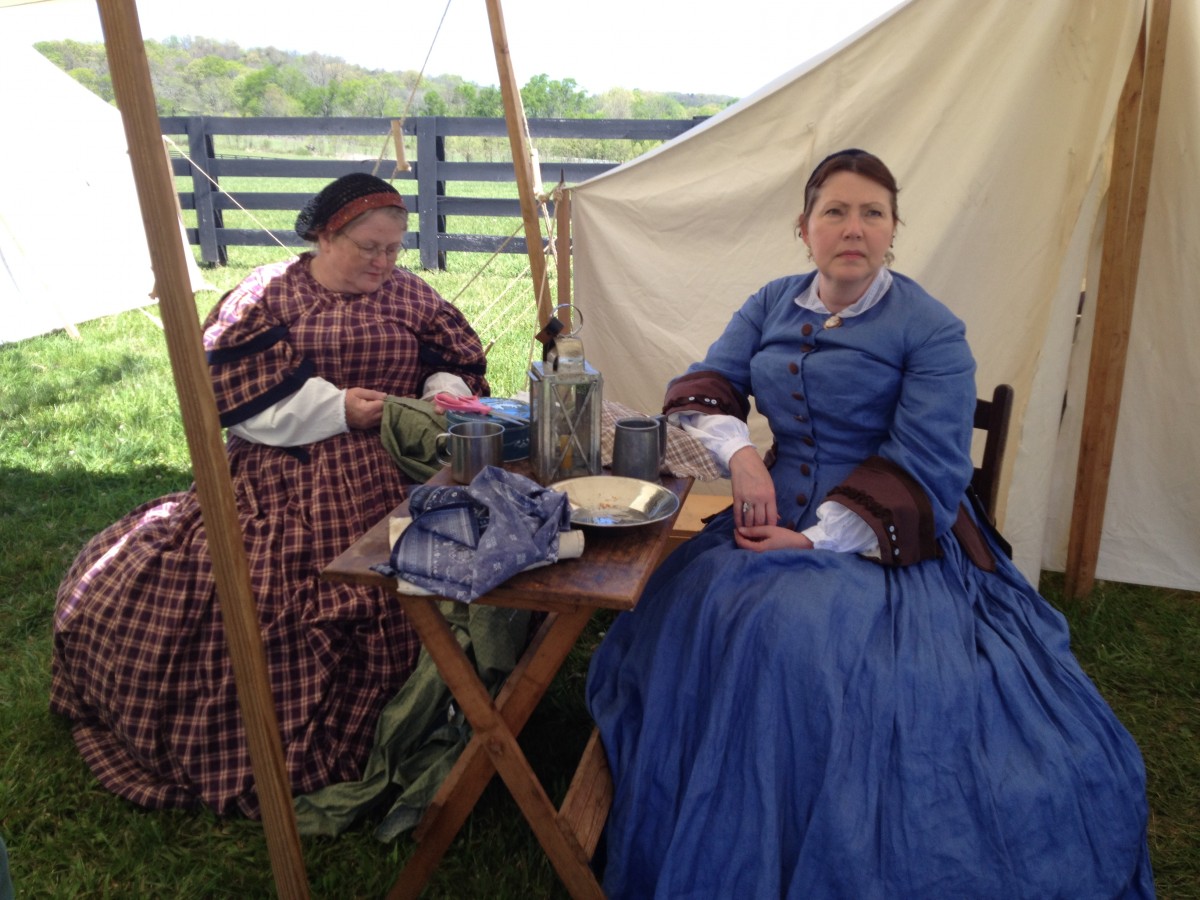 by Anne Pyburn Craig
On the second weekend in April, Old Mulkey State Historic Site will once again welcome the reenactors of the 9th Kentucky Volunteer Infantry Regiment for a weekend of Civil War-era activities. It’s not their first or last visit to Tompkinsville; the 9th has been to Old Mulkey before and has agreed to stage a reenactment of the Battle of Tompkinsville as part of Monroe County’s Bicentennial celebration in 2020.
So what can you expect if you visit the park between 9 and 2:30 on Saturday April 14 or Sunday April 15? “Old Mulkey  is a good low-key venue to do “living history” where we camp, interact with visitors, do infantry drills and even train ourselves,” says Todd Watts, administrative adjutant for the regiment. “We started using the site because Marcus Woodcock, a veteran of Company B (the designation we also use) wrote in his memoir that he and a friend met at a meeting house in late September 1861, to hold a public debate about whether to join the war.  Afterwards he and several friends and others who witnessed the debate decided they would join the Union cause. There is no mention if Mulkey was the meeting house used, but it was there then, and there is a 9th Kentucky grave in the cemetery. It’s. as good a place as any to declare to be the birthplace of Company B.”
The 9th Kentucky, most of whose members are from middle Tennessee,  is what reenactors call a “mainstream” field unit, meaning they do educational, parade and battle events instead of restricting themselves to one category. It also means that, although accuracy is prized, so are fun and inclusion. “We pride ourselves on being family-friendly and able to have a good relaxing camp, while being able to hide away anachronisms for the purpose of educating people,” says Watts. “On the march or in the field, we are respected as a capable unit. We’re trained to the standards of the US National Park Service, which allows us greater freedoms at those sites when we visit.”
Who are the reenactors? All sorts of folks, says Watts. “We have a gunsmith, security
director, firefighter, EMT, a few students ranging from elementary to post-college levels, a deployed Navy pilot, military reservists, nurses, educators, reporters, doctors, artists, a professional musician, an author, electricians, automotive mechanics, a farm equipment repairman, an accountant, factory workers, office workers and retirees, and that’s just off the top of my head. All these people come together at camp who probably would never meet any other way.” The initial expense of getting outfitted as a reenactor can run a few hundred for a uniform and $1,000 for a replica weapon, but once you have your gear, Watts says, “you can get through the weekend on $10-20 worth of ammunition and a couple of cans of soup.”
Come see the reenactors in action on Saturday, April 14 and Sunday, April 15 from 9 a.m. to 2:30 p.m. Following Sunday’s reenactment, the regiment will visit Old Soldiers’ Cemetery at 3 p.m. to fire a triple volley in remembrance of those buried there, several of whom are 9th Kentucky soldiers.

For more information on the Living History weekend and other coming events at Old Mulkey, contact Sheila Jobe Rush at (270) 487-8481 or visit parks.ky.gov/parks/historicsites/old-mulkey.