Special to the News-Herald

Munfordville, KY (April 1, 2018)- On Sunday morning at 3:14 a.m. (CST), KSP Post 3 dispatch received a 911 call reporting a shooting incident, which had occurred at 370 G. Shelton Road in northern Hart County.  Troopers, along with members of the Hart County Sheriff’s Department, responded and found that two residents of the home had suffered apparent gunshot injuries in an upstairs bedroom of the residence.  One resident and home owner, Jeffrey D. Nie (56) had sustained multiple gunshot wounds.  His wife, Barbara Nie (58) had also sustained a gunshot injury.  Barbara Nie was subsequently transported to Hardin Memorial Hospital and later taken to University of Louisville Hospital for treatment of injuries, where she is currently listed in serious, but stable condition.  Jeffrey D. Nie was pronounced deceased on scene, by Hart County Coroner Reggie Pettitt.

Detectives with Post 3 processed the scene throughout the early morning hours and upon completion of a preliminary investigation, arrested the biological daughter of both victims, Brina E. Nie (21) of that address, for charges of Murder and Assault 1st degree.  She is currently lodged in the Hart County Jail.

No further information is available for release at this time. 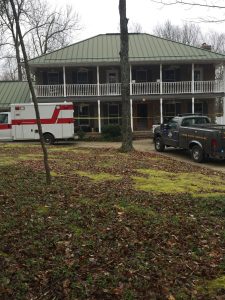