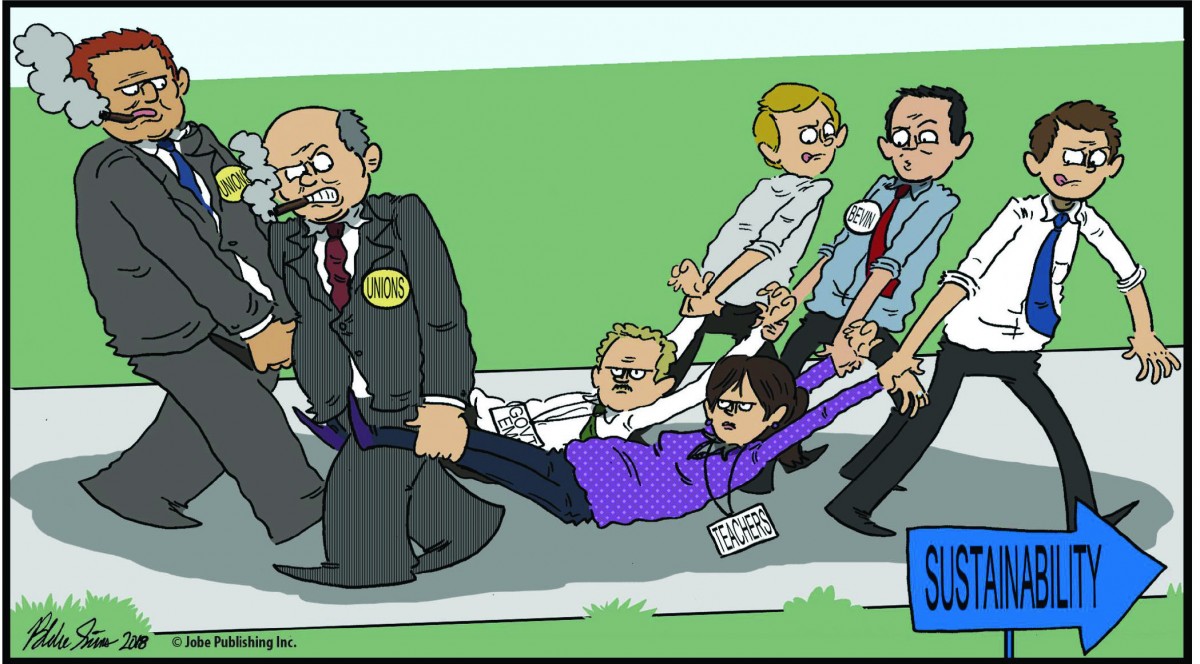 My safe place is at my laptop writing. I can share my thoughts, walk away from them for a few hours and then come back with a true objective thought on the positions I take.

This is not at all possible in the real-time world of politics.

Over the past few months our Governor and the teachers’ union leadership opposing him have gotten an amazing amount of press coverage. Of course, tempers are heated and a tremendous amount of fear-mongering has consumed the debate.

I have experienced the anger myself for simply offering truth. Sadly, in politics there is a thought of “you have to be with us” or “you are against us” is prevalent; but for a newspaper publisher this isn’t at all the position any should choose.

Now that we have seen the worst from both sides of the debate and there is still time to fix this problem let’s consider some very real facts.

Kentucky’s pensions are among the absolute worst under-funded pensions in the nation. I’ve read anywhere from $40-$60 million short even with Governor Matt Bevin and the current legislators making the full legal funding mandates and more than any previous administration in our commonwealth’s history.

Government pensions are growing at an exponential rate and even if addressed at this very moment it would take decades to fund fully. They are growing so fast that Jefferson County alone is expected to jump by $42 million by July 1, of this year. Yes, jump this much.

Senate President Robert Stivers has said that school boards are growing as well; the Fayette County School retirements are expected to grow by more than $6 million. I pulled just these two to make my point for a real need to fix our problem. These are two of hundreds of examples making up the $60 million shortfall.

As a born and raised Kentuckian I think I have some leverage when saying we are indeed a poor state without anyone taking too much offense. We just don’t have the funds, the existing tax base and probably not even the hope for a tax base needed to sustain this looming reality. Anyone outside looking in will easily see something must be done now.

Just consider these facts. Read cautiously because they contain no opinion at all, just facts I hope will help make the point for compromise.

The average household income for the counties we serve range from $28,439.00 in Monroe to $38,374.00 for Barren. Keep in mind most of these households have no pensions whatsoever.

While the National Education Association says the average teacher pay in Kentucky for the year ending 2016 was $52,134.00. It’s important to understand that the average individual teacher pay in all of Kentucky is almost double for the entire HOUSEHOLD work force for many Kentucky communities and only 3 counties having a higher average.

I have on my desk salary details for every school system by county and it quantifies actual pay of the smallest, poorest performing school district in our region as having 8 individuals earning more than $80,000.00. It isn’t promoted but Kentucky ranks 46th in household income while Kentucky teachers rank 27th in raw numbers, but 7th when adjusted with cost of living comparisons.

Now this is where I offer my opinion; the retired teachers and all government employees promised pensions should indeed get them.

I’m comfortable not one single Democrat or Republican legislator and certainly not Governor Bevin is contemplating doing away with them. There is a bigger threat for them to be damaged more by doing nothing than accepting the minor changes proposed by legislators at this time.

This crisis must be fixed now one way or another and without a doubt the best solution would be a compromise, but this is not possible without teachers and their unions willing to do so as well.