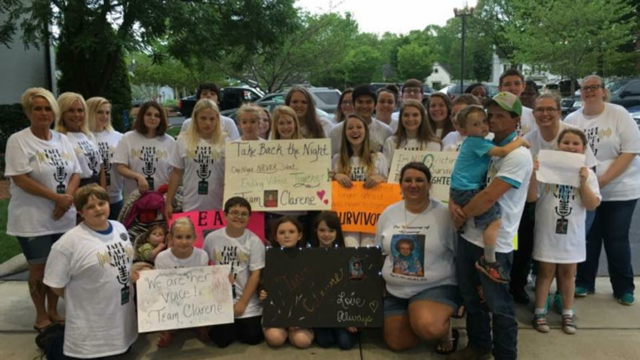 Team Clarene at Take Back the Night 2017

Teresa Huber has very personal reasons for organizing the “Breaking the Silence” rally and walk and speaking out on the subject of sexual assault and abuse.  “My grandmother was raped and murdered in 2010, in her home in Tompkinsville,” she says. “I want to let people in Monroe County know that people do care, and that there are resources and assistance available to them.”

The rally, the first of its kind in Monroe County history, will take place on Thursday, April 5  at 6 p.m. in Courthouse Square. Besides Huber, a “secondary” victim of the tragedy that befell her grandmother, there will be another survivor and representatives of Bowling Green support organization Hope Harbor and the state Department of Protection and Permanency. Singer Mary Walker will perform “This Little Light of Mine.” Hog Wild BBQ is donating their time to serve hot dogs for 200, and gift certificates from local businesses will be given away all evening.

Huber says local officials have been very supportive. “Both the mayor and the county judge executive have promised to come and sign proclamations at the event, and Sheriff Ford and Chief Denhard are very supportive as well. They were all for it immediately. We have law enforcement donating their time for the rally.”

She says law enforcement from local agencies and the Kentucky State Police were also terrific on that awful day in February 2010 when her grandmother, 78-year-old Clarene Adams, was found dead in her home on Terry Drive in Tompkinsville. “Everyone was very considerate and caring and absolutely there for our family. The kicker was, though, when they caught the guy, he was someone who had been released from prison two months earlier for raping a 2-year-old boy.” Brandon Young of Tompkinsville, 32 years old at the time of the crime, is currently serving life without parole for Adams’ murder.

Huber says the folks at Hope Harbor helped her begin to heal and find a way forward after the tragedy struck. “I struggled with really simple things. I had gotten her her a McDouble from McDonald’s that day; it was years before I could buy one again. It gets you in ways you don’t expect. But the Hope Harbor people helped me; I spent two and a half years in their support program as a secondary victim. I also knew my granny would say, ‘Teresa, get your stuff together!’ I know she wants me to move on. I’d quit college and she’d made me promise her to finish, so I went straight through the next four semesters and got my bachelors’ degree in social work.”

When she began organizing the rally, Huber’s Hope Harbor contacts alerted her to something she hadn’t known: in 2010, a proclamation had been signed declaring April of that year to be Sexual Assault Prevention Month in Monroe County. “But I don’t think it got a lot of publicity,” she says. “And it really does take a lot more than a proclamation. I want people who suffer from this issue to know that the community has their back and somebody cares and that there’s help available. There’s stigma attached to sexual crime in a small town; people worry about getting talked about, which may make it harder for them to get the help they need. It can be hard to have a conversation about it.”

To fight that stigma, she’s been participating in the Take Back the Night sexual assault awareness march in Bowling Green every spring since 2012 as part of “Team Clarene.” Her grandmother’s team has grown from 8 members that first year to 52 in 2017; she hopes 60 will turn out this year for the Bowling Green event, to be held this year on April 20.

She’s hoping people will come out for Breaking the Silence next week  in Monroe County, and over 50 have signed up to do so on her Facebook page. Besides support for survivors, she hopes to send a strong message to any who might consider sexual assault remotely acceptable to perpetrate on anyone, of any age, ever.  “I hope people who have been through this realize there are experts they can talk to and not keep things bottled up inside,” she says. “And I kinda hope bad people will see this and think, ‘these people aren’t afraid to speak up about this; they’ve got a lot of support here. Who knows, even if one of them thinks twice, that would be good. For me, I’m going to do what Granny would have wanted me to do for the rest of my life, and this is part of that.”