I have heard this melodic phrase for as long as I have memory. When we were kids it was done in two parts, one of us tapping out the first five beats with another kid responding with the final two beats. It was commonly used in the Looney Tune cartoons and may be where we first heard it. I also know some Bluegrass musicians, such as Earl Scruggs, occasionally used it as a comedic ending to a song. I was surprised to learn that it was fairly popular in the early 1900’s as comedic relief in some orchestra presentations. The “two bits” response is a good indication of the age of this little ditty, as it has been a very long time since a shave and haircut cost just two bits (twenty-five cents).

While I’m waxing nostalgic, do you remember the old Burma-Shave signs? They were a series of six small roadside signs which contained a message in rhyme segmented on the first five, with the sixth being the Burma-Shave logo. These signs first appeared in 1926 and were very prevalent until 1963, found all along highly travelled highways. For a trip down memory lane, Google “Burma-Shave signs” to see images of those signs. The last ones I saw still on the roadside were near Van Wert, Ohio, on old US 30 when I was stopping at a little Mom and Pop Truck Stop called Rambler’s Roost. I had a very “haunting” experience there, but that’s a story for another time, maybe an Over The Road series. 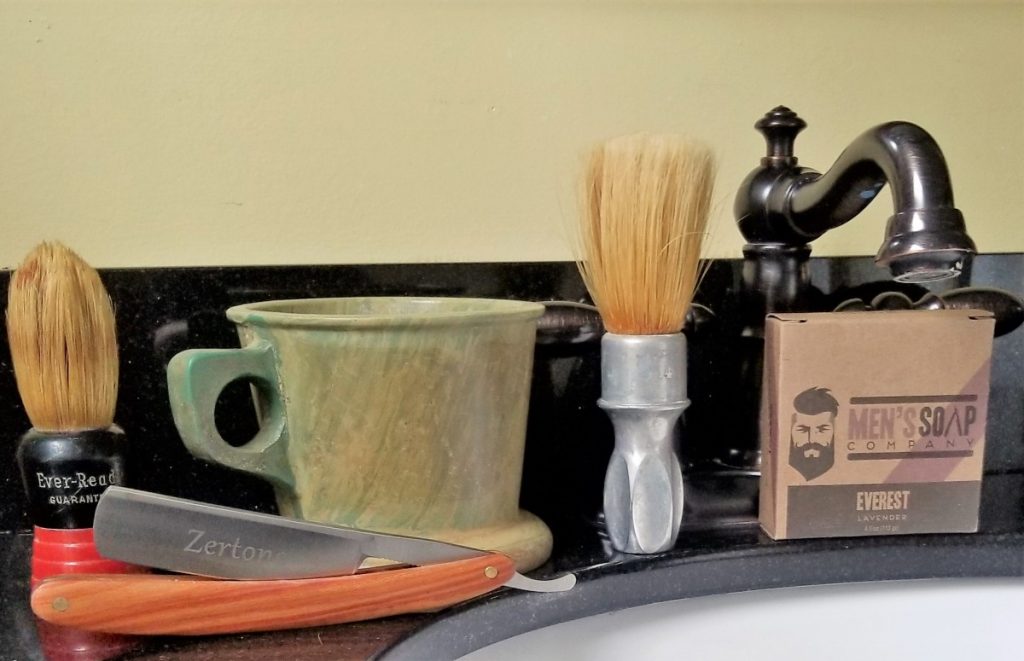 The shaving mug and brushes that began the trip down memory lane.

I was recently reminded of the “old time” barber shaves I saw my Dad get when I was a kid. I can remember him taking us to the barber shop that was on the ground level of the Uptowner Hotel, I think it may have been Steenbergen’s. This was probably where I saw Leslie Bowman for the first time. Sometime later Daddy took us to Grover Wyatt’s on Happy Valley Road. This is also where I first met Joe Thompson, who cut our hair while Grover worked on Daddy. Joe eventually opened his own shop in a trailer on Columbia Ave., next to a car wash, I believe. Even later he converted a house that was closer to town into Mr. Joe’s. In any event, what brought on these revelations, one morning I discovered I was out of my shaving gel for sensitive skin. Not wanting to “dry” shave, I recalled my Aunt Margaret Marshall giving me a shaving cup and brush that belonged to my Uncle Joe. I dug through a cabinet and found it way back in a corner.

I had seen Papa (Luther Garlin Powell) use a cup and brush, as well as a straight razor he sharpened on a leather strop, so I figured I’d give it a shot. My first attempt was trial and error, finding that getting a good lather from the shaving soap was more difficult than I imagined. I completed the shave and even with the very thin layer of soap I had on my face, I was extremely pleased with the smooth, softness the process left me with. I thought about the shaves I saw my Dad get, with a conditioner and hot steamed towel applied to his face, then the heated shaving cream before getting shaved with a straight razor. Afterwards, another hot towel was applied, followed by another skin conditioner. I had never experienced this personally and decided I was long overdue for a “spa” day.

I was dismayed to find that barber shaves are becoming a “lost art” as many local barber shops do not offer them. After checking around, I made an appointment with Lauren at Debbie’s Barber Shop. I got the shave and facial, spending approximately an hour being pampered, with multiple hot steamed towel applications, exfoliated, facial massage, cool towel application (to close the pores) and lotions. As I sat in the chair, images of my Dad flashed in my head and the experience brought me close to him once again. My “spa day” was extremely relaxing and my entire face was as smooth and soft as a baby’s butt. It wasn’t exactly the way I remember Daddy’s barber shaves, but I would highly recommend it.