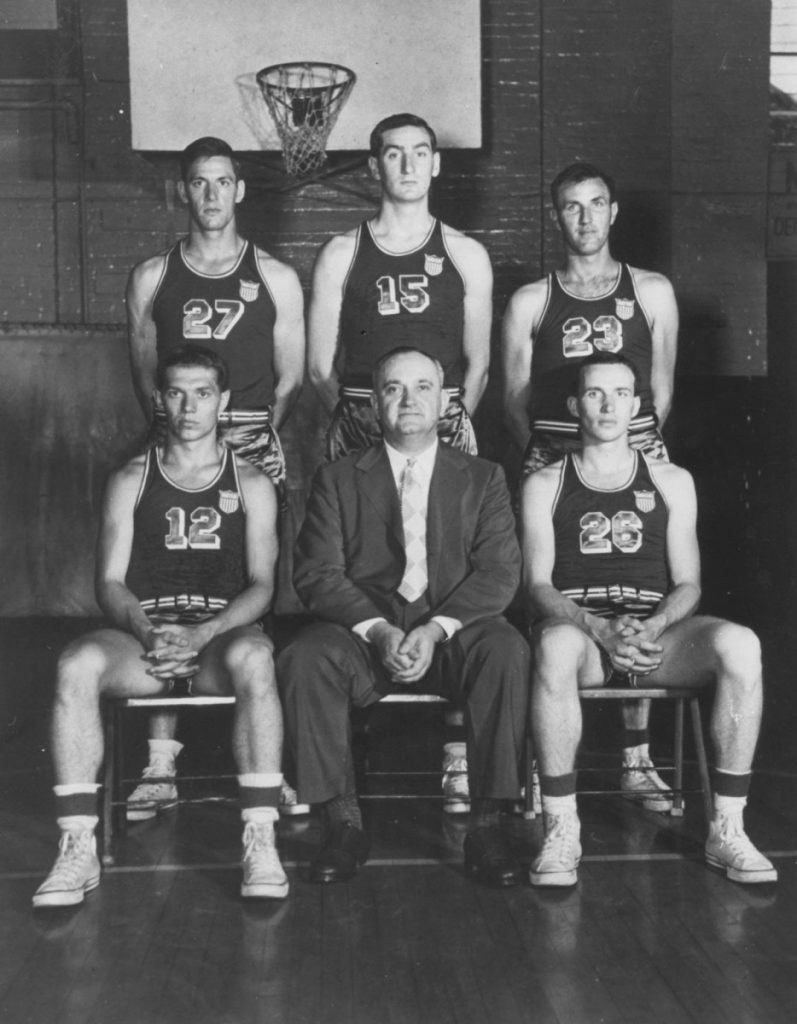 Seventy years ago this month Coach Adolph Rupp’s legendary basketball team, “The Fabulous Five,” ushered in a new era in University of Kentucky sports. Rupp boasted that the team was “the greatest basketball team of all time.”

The celebrated quintet consisted of forward Wallace “Wah-Wah” Jones, guards Ralph Beard and Cliff Barker, center Alex Groza, and point guard Kenny Rollins. They won the regular-season Southeastern Conference championship and then won the SEC Tournament on the floor of the Jefferson County Armory in Louisville.

As the reigning SEC titleholders, the Wildcats defeated the Ivy League’s Columbia in the opening round of the NCAA Tournament, then defeated Holy Cross in the semi-finals. The championship game on March 23, 1948 pitted the Wildcats against Baylor University as 16,174 basketball fans filled Madison Square Garden. The Fabulous Five defeated the Bears, 58 to 42, the first NCAA champions in University of Kentucky history.

While the collegiate basketball season was over, the Fabulous Five continued making history. They made up the U.S. Olympic Basketball Team and on August 13, won the Olympic Gold Medal by defeating France, 64-21, at Wembley Stadium in London, England.

The road to the Olympics was challenging. In the Olympic trials, Kentucky defeated Louisville, 91-57 and then defeated Baylor, 77-59. In the championship collegiate bracket, the Wildcats fell to the Phillips Oilers, an AUU team.

In order to finance the overseas travel expenses, the Wildcats played a 3-game exhibition series. In the first game, Kentucky narrowly lost to the Oilers in Tulsa. The second game stung the Wildcats with a double overtime defeat against the Oilers. The third game was scheduled for Lexington but there was no suitable venue (U.K.’s Memorial Coliseum would not be built for two more years).

As necessity inspires creativity, the floor of the Jefferson County Armory was removed and reinstalled at Stoll Field, U.K.’s football stadium, for the game. The basketball game played on a football field attracted 13,000 fans, at the time the largest crowd at a basketball game in the south. The Oilers bested the Wildcats again which meant that U.K.’s Coach Adolph Rupp would be the Assistant Coach of the U.S. Olympic Team while the Oilers’ Bud Browning would be the head coach.

Asked to reveal his most memorable achievement in life, Ralph Beard said it was winning the Olympic championship in 1948 because it was a victory for his country.