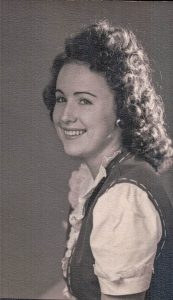 This story was written by my Mama, Dorathean Powell, and appeared in Broomsedge Chronicles in the fall of ’92.

“Each generation has had differing ways of entertaining itself, but I look back at the 1930’s with particular nostalgia. Those were the days of the one-room country schools and the social events that centered around them, such as the box suppers, the moonlights and the wonderful Christmas activities.

“The country schools had an ice cream supper each summer, coupled with a box supper or pie supper. The funds that were raised were used to buy school supplies that the children needed but couldn’t afford to buy. Some of the money was also spent on balls and bats for playtime. Before the night of the event, some of the men of the neighborhood built a stand against the wall outside the school building, which would later hold the creamy and delicious ice cream. The night of the event, the ice cream was dipped into cones and sold for a nickel. There was no electricity, so kerosene lanterns were used for lighting. The dim lighting produced an eerie, yet enchanting, atmosphere as the people drifted in and out of the lantern light. Children darted here and there in a high state of excitement. Sometimes there would be country music, a treat because these were the days before radio and television. The unattached girls prepared food- -such as fried chicken, ham and desserts- -and packed it in gaily-decorated boxes to be auctioned off. The eligible boys bought the box suppers and the privilege of eating with the girls who prepared them. There were no names on the boxes, but the boys always knew which box belonged to their girl before they bought it. Sometimes a boy would not have enough money to buy his girl’s box, and agony resulted when a rival got to eat with her. The men claimed their box suppers and their girls, and with much giggling and flirting, they all melted into the shadows to eat- -but always under the watchful eye of Mama!

“The moonlights, held at designated farmhouses, were gala events, usually arranged by the grownups, though all ages from different communities attended. Games, such as Skip to My Lou, Captain Jinks and Sweethearts a Hunting, were played. These games were on the order of square dancing and consisted of lots of couples skipping, swinging, promenading, sashaying and bowing. In the winter, it was common for moonlights to be held inside someone’s house. A room would be divested of its furniture, and the swinging and sashaying would begin. I can visualize my mama as she sashayed out to meet her partner and promenade.

“As children growing up in the depression years, we didn’t often get toys for Christmas – we got bananas, apples, oranges, nuts and candy. Our stockings were not the fancy ones that children have today – we used Mama’s old silk stockings to hang up to be stuffed because they stretched a lot and therefore held a treasure of goodies, goodies we only had at Christmas time. Because of this, our anticipation and appreciation were much greater than that of children today who have so much all year, that Christmas doesn’t mean much to them.

“I remember one Christmas when I received a gift of a little chair of my own, so that I could take my place in the circle around the fireplace and not have to sit on someone’s lap. If I live to be a hundred, I’m sure I will never forget that day. We called downstairs that morning and asked Daddy, ‘Has Santa Claus come yet?’ ‘Yes, he has, so come on down, kids,’ he said.

“We bounded down the stairs into a very cold room, for Daddy hadn’t yet built a fire. When I saw my little chair sitting there, I was so excited that I didn’t notice the cold temperature or the flap on my long johns hanging down in back. However, when my bare skin connected with the polished plank bottom of that little chair, it was cold as icicles that hung from the eaves outside, but I didn’t budge. I loved that little chair, and it went with me into the first house I moved into with my husband.

“Another fond memory of Christmas was when the neighbors gathered at each other’s houses through the week of Christmas. The houses would fairly burst at the seams with children, and all were in a high state of excitement. A great abundance of food was prepared, with almost all of it being grown on the farms. There was roast turkey, goose, duck or chicken and lots of cakes, pies, custard and fruit salad.

“There wasn’t much money in the 1930’s, and life was hard in many ways, but that didn’t stop the building of beautiful memories and family togetherness. In spite of the harshness and sometimes deprivation of those times, the simple lifestyle and slow pace was more preferable than the fast and harried lifestyle of today.”