The spring of 1775 was filled with momentous events in America, most related to tensions between the American colonies and their Mother Country: Patrick Henry delivered his famous words “Give me liberty or give me death,” Paul Revere made his legendary ride to warn of approaching British troops, and the Battle of Lexington brought forth “the shot heard around the world” to begin the American Revolution. Meanwhile, some focused attention on the vast lands known as Kentucke, then territory relatively unexplored by English-speaking peoples. 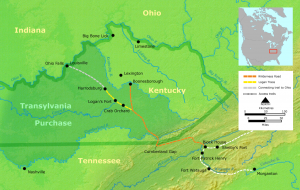 THE TRANSLYVANIA PURCHASE secured by the Treaty of Sycamore Shoals.

Believing that the lands comprising much of present-day Kentucky and Tennessee would soon be under British control, Daniel Boone advised North Carolina land speculator Richard Henderson that the Cherokee could be interested in selling some of their vast land holdings. Between March 14 and 17, Boone, Henderson and others negotiated with Cherokee leaders at Sycamore Shoals of the Watauga River at Elizabethton, Tennessee.

On March 17, 1775, the Treaty of Sycamore Shoals, with two distinct parts, was signed. One part known as the “Path Grant Deed” included lands in what is now portions of West Virginia. The second portion, known as the “Great Grant,” transferred 20 million acres of land between the Kentucky River and the Cumberland River which makes up much of modern-day Kentucky and northern Tennessee. Henderson’s Transylvania Company paid 10,000 pounds sterling in trade goods for the purchase.

Daniel Boone and Michael Stoner set out to blaze a trail from Fort Chiswell in Virginia into central Kentucke through the Cumberland Gap for the Transylvania Company. With the aid of 35 axmen, they cleared a trail that became the Wilderness Road, the principal route used by settlers for more than 50 years to reach Kentucky from the east. The trail was later lengthened using Native American trails to reach the Falls of the Ohio at Louisville. The Wilderness Road was so steep, narrow and rough that it could only be traversed on foot or horseback. THE TREATY OF SYCAMORE SHOALS negotiation is depicted in T.Gilbert White’s mural in the west lunette of the 1910 Kentucky Capitol.

Henderson envisioned the land as Transylvania, a colony named for his company, with himself as the leader of the colony. On September 25, the Transylvania Company petitioned the Continental Congress to be recognized as the 14th colony.

In 1776, the Virginia General Assembly invalidated the Treaty of Sycamore Shoals (also known as the Transylvania Purchase) and officially reclaimed the land, ending the existence of Transylvania. North Carolina later voided Henderson’s claims of land that is now in Tennessee. Both Virginia and North Carolina acknowledged the Transylvania Company’s labor and expense in opening the land for expansion and awarded them 200,000 acres.

On March 7, 1789, the Virginia General Assembly dropped the second “E” from Kentucke having decided the name was more properly ended with a “Y.” The origin of the name – credited to many locations, people, and circumstances – remains a mystery. The Iroquois, Cherokee, Wyandotte, Shawnee, Delaware, Catawba, and Algonquian tribes of native Americans all had various terms that could have been the origin. 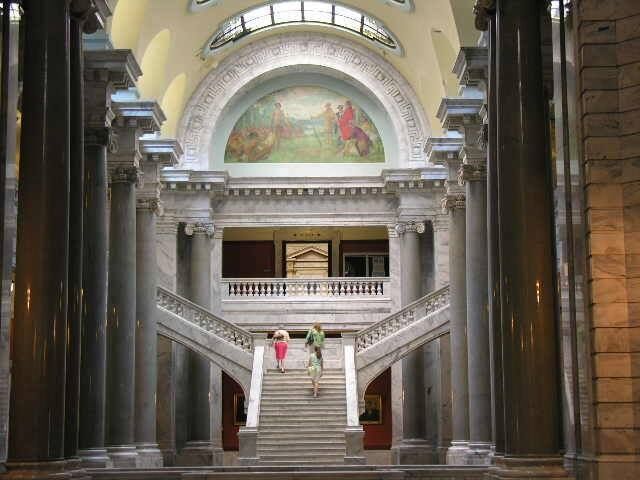 HIGH ABOVE THE marble staircase leading to the House and Senate Chambers in the Kentucky Capitol are T. Gilbert Wade’s murals depicting the negotiation of the Treaty of Sycamore Shoals and Daniel Boone’s party catching their first view of central Kentucky from Pilot Knob.

Kentucke does not mean “dark and bloody ground” as nearly everyone was taught for decades thanks to a reference in John Filson’s 1784 book, The Discovery, Settlement and Present State of Kentucke, in which he wrote “…now called Kentucke, but known to the Indians by the name of Dark and Bloody Ground….” In reality, the reference comes from Cherokee Chief Dragging Canoe, speaking at the Great Council at Sycamore Shoals in March 1775. The Chief was strongly opposed to the treaty and told the whites that there was a dark cloud over the land they were seeking to acquire, referencing opposition to settlement by whites. Another Cherokee Chief at the same council told the whites that the land was a Bloody Country, referencing conflicts between tribes claiming hunting grounds. In no instance is there an implication that the terms were a translation of the meaning of the name Kentucky.

When the Commonwealth of Kentucky built its fourth and present Capitol, T. Gilbert Wade was commissioned to paint murals in the decorative lunettes above the entrances to the House of Representatives and the State Senate. The mural in the west end depicts Henderson, Boone and others negotiating the Treaty of Sycamore Shoals. The east lunette mural depicts Boone and his party catching their first glimpse of the Bluegrass region while standing atop Pilot Knob in 1769.

Sam Terry’s My Kentucky column appears weekly in Jobe Publishing newspapers in celebration of the 225th anniversary of Kentucky statehood.  Past columns can be accessed at www.jpinews.com 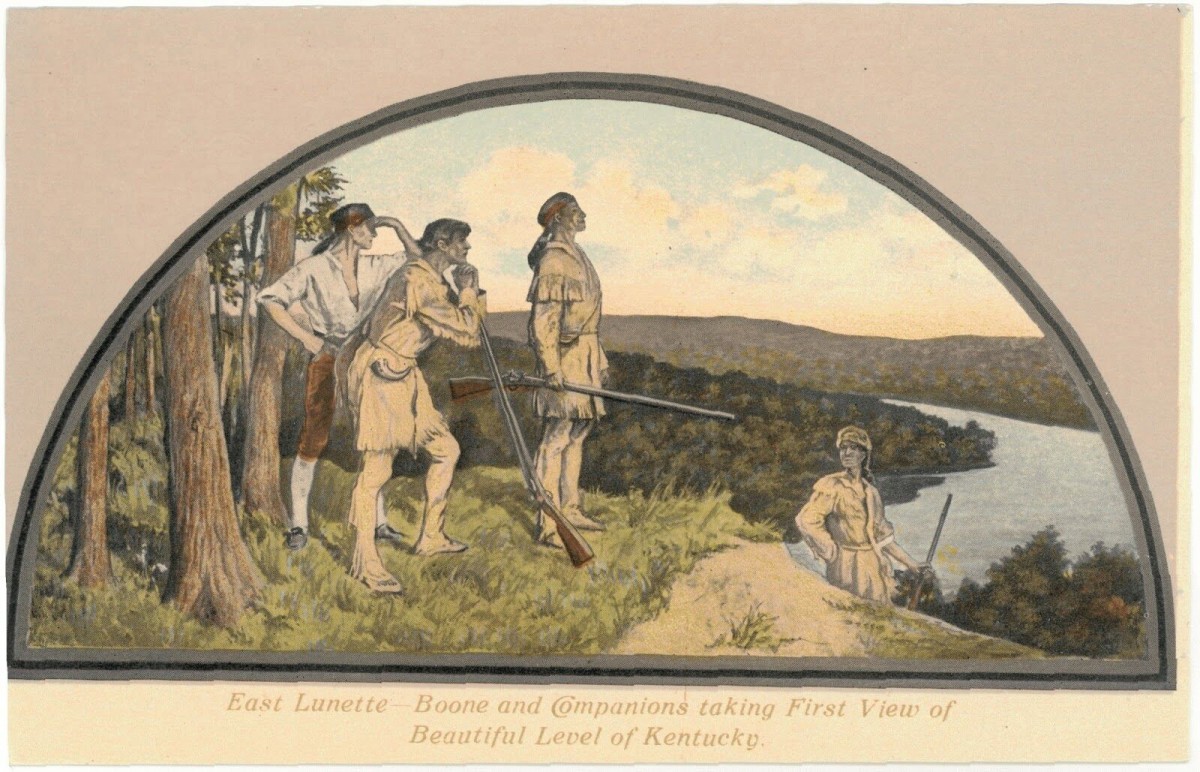 THE EAST LUNETTE in the Kentucky Capitol contains T. Gilbert White’s depiction of Daniel Boone’s company catching their first glimpse of central Kentucky from atop Pilot Knob in 1769.