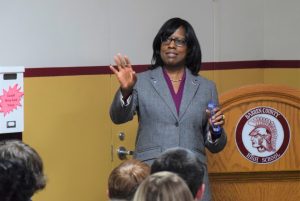 Growing up in inner-city Detroit, Jenean Hampton was reared in a single-parent household with no car or even a washing machine. Now Kentucky’s Lieutenant Governor, Hampton spent three hours interacting with local students sharing her story and lending encouragement for their future.

Hampton visited Barren County Schools’ College Street Campus, an alternative learning center, with about 60 students. According to Campus Director Dan Belding, the school serves students under state supervision or who have experienced difficulties in regular classroom and school settings. About 20 students from the Glasgow Alternative School, a similar learning center operated by Glasgow Independent Schools, were invited to meet Hampton and hear her story as well.

Kentucky’s first black statewide official, Hampton described her formative years in a household with four girls and headed by her mother whose education ended with 8th grade. “A result of not having a high school diploma or any skills, her options were limited,” Hampton said, revealing that her 90-year old mother now lives with her in Bowling Green.

“My mom was upbeat. You’ve heard the term ‘count your blessings,’ that was how my mom approached things. We didn’t concentrate on what we didn’t have,” Hampton said. “She showed us by example that the right thing isn’t always easy and the easy thing isn’t always right,” adding the story of the 1967 riots in Detroit when her mother was offered food stolen from a grocery but flatly refused it.

A voracious reader, Hampton dreamed of being an astronaut, something that she said was highly unlikely for a second grader who wore glasses. Through dedicated studies and hard work, Hampton earned a Bachelor’s Degree in Industrial Engineering. She spent seven years in the U. S. Air Force where she designed computer software before joining the public sector where she worked in the corrugated box manufacturing industry. In the course of 19 years, she continually rose through the corporate world, eventually landing in Bowling Green. Along the way, she earned a Masters’ Degree in Business Administration with concentration in entrepreneurship, e-commerce, and marketing.

Hampton said she became interested in government through the Tea Party movement which led her to run for the Kentucky House of Representatives in 2014. In that same period, she was one of a group of Tea Party activists who vetted now-Governor Matt Bevin to run for the U.S. Senate. Those experiences, Hampton said, provided her with a different kind of education that included grassroots, hands-on campaigning. Hampton and Bevin both lost in the 2014 election. The following year, Bevin chose to run for Governor and asked Hampton to be his running mate.

Encouraging the students to become active citizens, Hampton said, “government works best when we, the people, get involved.” She added that whether considering goals in education, a career, or government, “you’re capable of way more than you think.”

Key to success, Hampton said was being “adaptable, flexible, and open for opportunities,” that come in life. She described her dislike of public speaking in her younger days but found that her career path included making frequent presentations. In her role as Lieutenant Governor, Hampton has now spoken to about 30,000 students around the Commonwealth. She encouraged students to be brave enough to take a class they assume they will dislike because, as in her case with making speeches, it turned out to open a path of opportunities.

As for being open to opportunities to learn and grow, Hampton said “my role models didn’t have to look like me. They didn’t have to be black or female.” Instead, she was willing to learn from, and perhaps emulate, people who weren’t like her.

Since becoming Lieutenant Governor, Hampton has been instrumental in creating the Kentucky Aerospace Commission; she pointed out that 630 Kentucky companies produce parts for the aerospace industry. Hampton’s signature initiative has been creating the Lt. Governor’s Entrepreneurship Challenge, a competition that she hopes introduces students to the idea of owning their own business.

After her talk with all of the assembled students as well as education and government officials, Hampton spent time with small groups of students. “We’re hoping that her story and interaction with the students will inspire them to reach beyond what they think they can achieve,” Belding said. 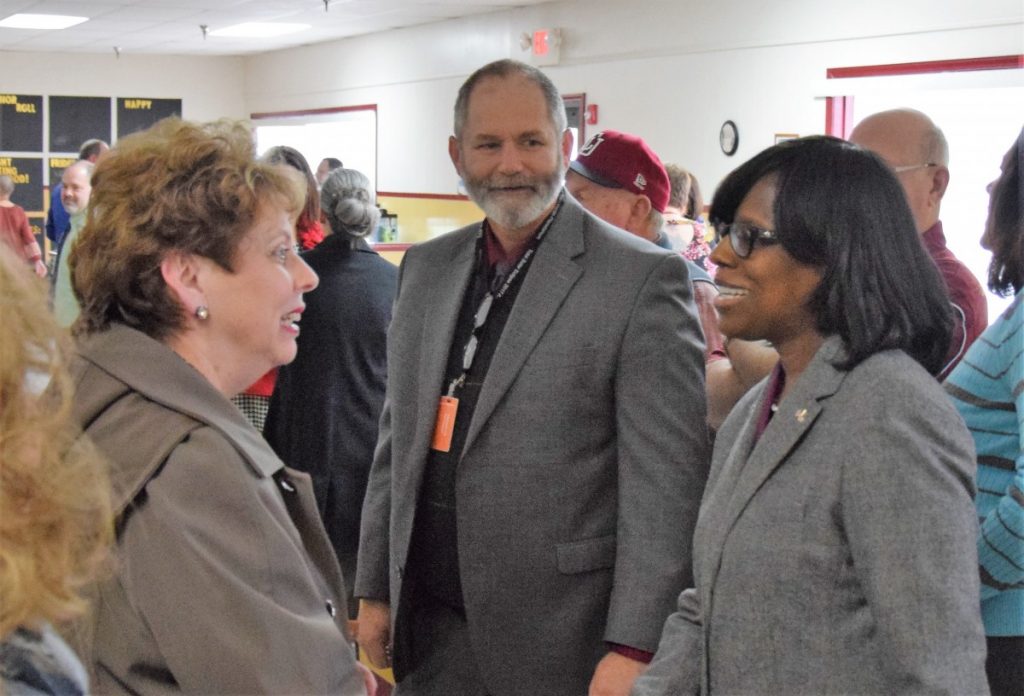