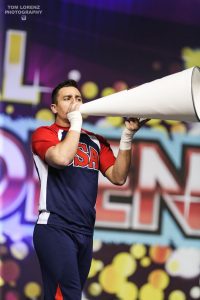 “U-S-A! Red, White and Blue!” Braxton Smith used a megaphone as part of the squad’s routine prior to showcasing their synchronized skills.

Prior to departing for the 12-day journey, Smith said “we’re all extremely stoked” about the chance to help advance the sport of cheerleading toward becoming an Olympic sport. Currently, cheerleading is a provisional sport and in line to become an official Olympic sport. USA Cheer selected the Wildcat cheer squad to represent the country as part of the international effort.

As the USA squad, UK’s cheerleaders were one of seven top medal countries – Canada, Norway, Russia, Germany, Switzerland, Korea, and the United States – invited to participate in the exhibition. The University of Kentucky cheerleading squad has won 23 national championships, the last three in consecutive years. An Edmonton resident, Smith was a cheerleader during his years at Barren County High School and is now in his fourth year on the UK squad. Edmonton resident Braxton Smith is seen on the far left of the photo holding the female cheerleader in this scene from the end of the squad’s routine at UCA College Nationals. Smith said of the photo, “I am overcome with emotion because I knew that we had just performed flawlessly. This is UK’s 23rd championship, the most in D1A history by far, and our 3rd year winning in a row. D1A in college cheerleading is essentially like Division 1 in NCAA.”

Smith was quick to point out that he and his teammates were not competing in the Winter Olympics but they were performing at some of the Olympic venues. “It’s a ‘competition’ without being a ‘competition.’ It allows us, as cheerleaders, to show what we do with judges observing. It’s part of the process for cheerleading to become an Olympic sport,” Smith explained.

The squad performed variations of its UCA College Nationals title-winning performance along with sideline cheer work at public events as well as at medal ceremonies. 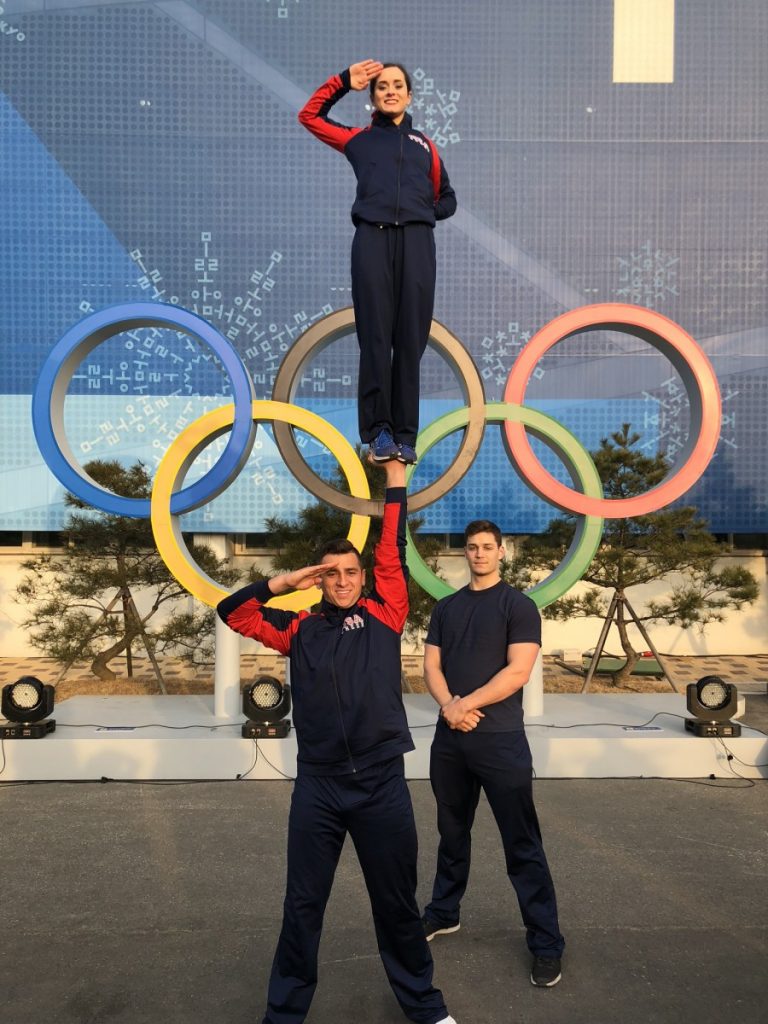 Braxton Smith gives a salute while holding one of his female teammates in front of the Olympic rings outside of the stadium in Pyeonchang, South Korea.

“It was such an honor to be there and represent our country,” Smith said. He was one of 16 cheer squad members and 2 alternates that made the trip to South Korea where they performed at various Olympics sites such as Medal Plaza. They also staged their synchronized skills at the speed skating venue and at the closing ceremonies.

Some of the cheerleaders who were part of the USA Cheer squad will head to Orlando in April to compete in the International Cheerleading Union World Championships. 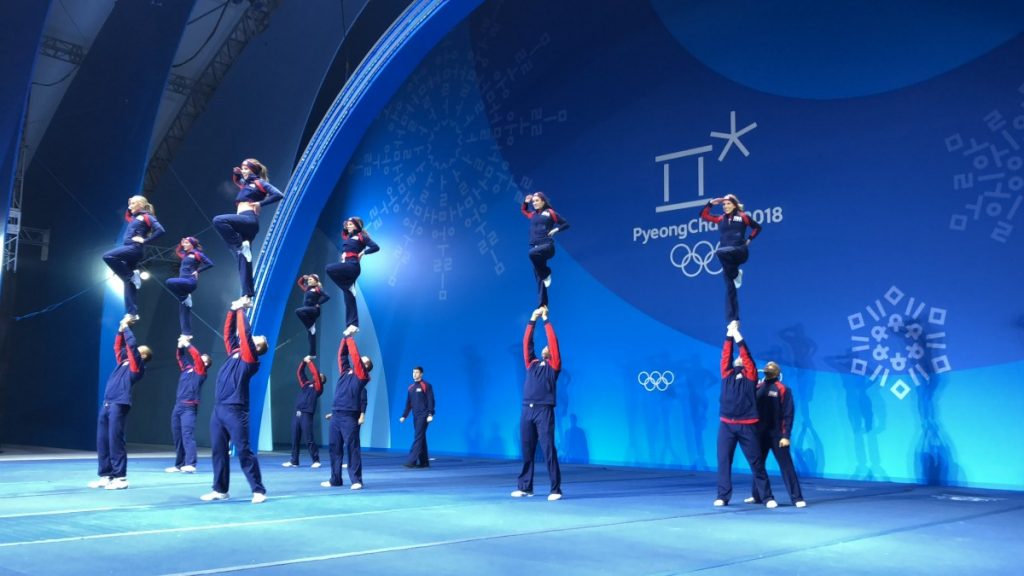 The USA Cheer team performing in the snow at Medal Plaza in Pyeonchang, South Korea.