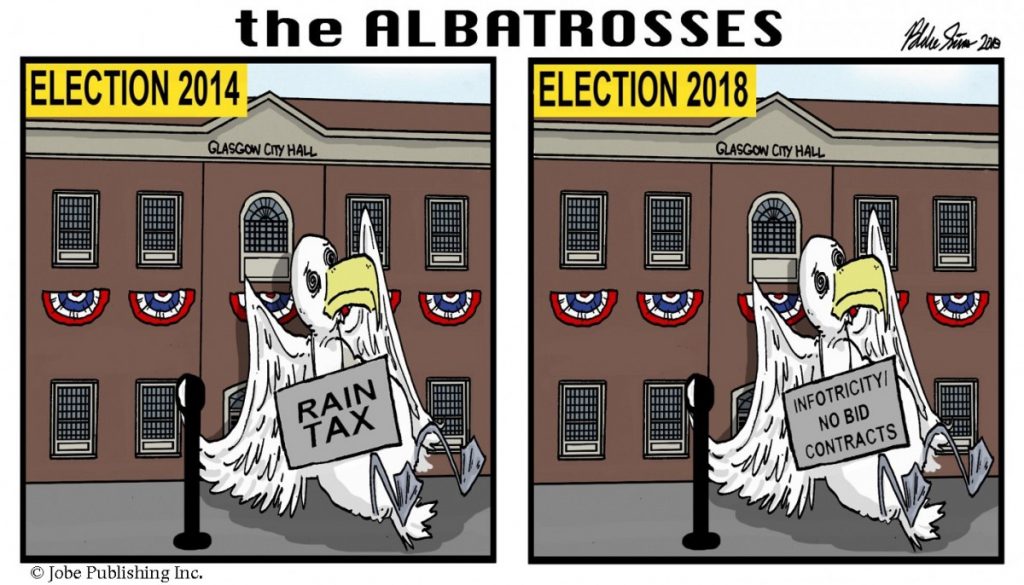 An albatross is a large ugly sea bird. In Samuel Coleridge’s poem, “The Rime of the Ancient Mariner,” a sailor shoots a friendly albatross and is forced to wear the carcass around his neck as punishment.

Since then the phrase, “wearing an albatross around the neck” is meant as an obvious detriment, or punishment.

Back in 2014, I wrote in this space that the Stormwater Management Fee or as I pegged it then as “The Rain Tax” was sure to be an albatross for the Glasgow City Council and Mayor at that time. The election came and went and sure enough voters elected a new Mayor and a large number of new council members.

For the life of me I can’t understand why the current council and Mayor are now allowing Glasgow Electric Plant Board Superintendent Billy Ray and the “EPB Yes-Men Board” to take a position that is sure to become their very own albatross in this election year.

The 2018 albatross for the Glasgow City Council and Mayor is sure to be EPB Infotricity and their $7.4 million no-bid government contracts for the SET Project. The mayor and council certainly didn’t mean for the community to be hurt by Ray’s untested billing procedure and I’m equally sure they had no idea he and this board were not following state procurement laws detailed in KRS 424.260.

We all make mistakes and often those of us with the best intentions find ourselves on the wrong side of what we might have done with all the facts. This is true for these elected officials and quite possibly even those appointed to serve on the Glasgow Electric Plant Board.

Just last week Melinda Overstreet with the Glasgow Daily Times did a front-page story centered around an Attorney General ruling around something we all know; “If EPB never adopted a model procurement policy then of course EPB doesn’t have to follow one.” It seems what Melinda didn’t think to ask or perhaps the question didn’t fit her newspapers intended narrative: “If Glasgow EPB didn’t adopt a model procurement policy does this mean the Superintendent can spend $7.4 million for purchases of materials or services without a single bid?”

If she had done this she may have gotten the same answer from Communications Deputy Director Crystal D. Staley as I did: “…if a local public agency such as an electric plant board chooses to adopt the code, then it must be followed. If not, other statutes apply such as KRS 424.260.”

It certainly doesn’t take a law or accounting degree to understand this to-the-point answer I was given. I encourage anyone who feels I am not a man of my word to follow up on my findings. It doesn’t take a journalism degree to make calls to the 13 other Kentucky TVA affiliates and find a common theme: “of course we follow KRS 424.260” and “I can’t imagine any government agency expensing any amount over $20,000 without doing so.”

A quick Google search will offer an example of how our Kentucky Auditor Mike Harmon cited Campbellsville City Government for allowing $47,000 of a $230,000 Civic Center Renovation project for being given to a contractor without advertising for bids. His name was omitted because the contractor did nothing wrong. It is the legal responsibility of the managing agency to manage the process, not the business owner, unless some pay to play scheme could be proven.

It appears Ray gave in excess of $1.276 million to a single contractor without any advertising or bid process and rather than he, his board, our council and Mayor step up to make sure this is addressed for future purchases, he instead insults our intelligence by having the recent AG ruling spun to justify his blatant disregard for Kentucky law.

If this board, council and Mayor doesn’t work diligently to establish a fair residential/ corporate billing rate and quickly adopt a model procurement code they will wear it like an albatross through the election of 2018.