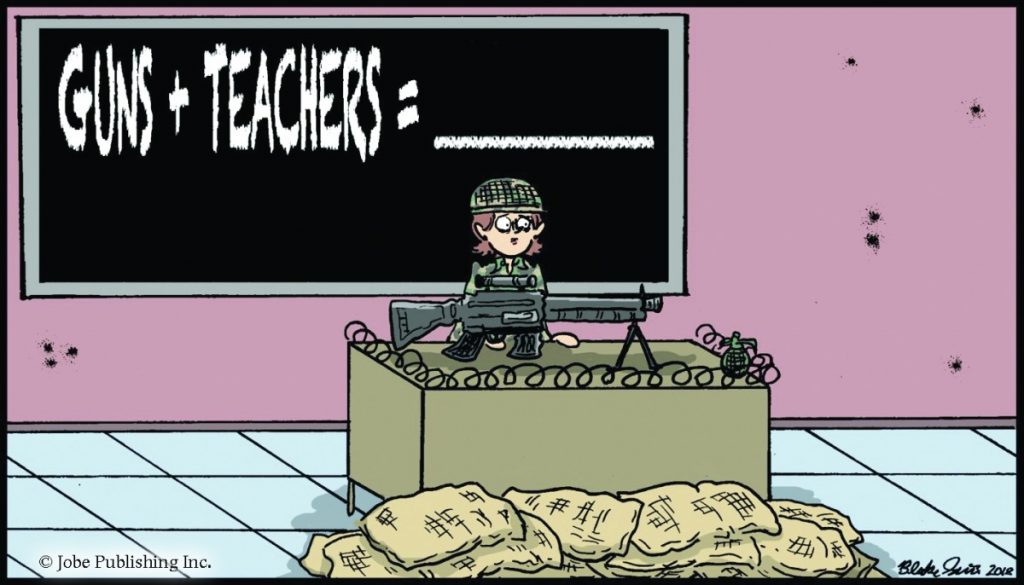 This past week’s discussions of arming teachers may be a “terrible idea” or even “the worst Trump idea yet” but it seems several states already have armed teachers and it is working.

Perhaps Republicans can learn from the Democrats on how they manage issues such as this when they had control of our state and country. It was Rahm Emanuel who said, “You never let a serious crisis go to waste.” As despicable as it may sound, good can and must come from it.

Sadly, the biggest challenge in Kentucky is fighting our largest employer (government) and unions for change. They want to do little more than raise taxes to subsidize their unsustainable manner for conducting business.

Perhaps now in the wake of the terrible Florida school shooting, the debate over whether teachers should carry guns in class can be brought to the forefront and real school safety be addressed.

Before I delve into this specific aspect involving gun laws let me say that without a doubt some sensible common sense gun regulating is essential and this too should fall to Republicans to make it happen.

Let’s be honest and admit there are individuals out there who are certifiably nuts, diagnosed for some mental health issue or medicated to the gills and they should not be permitted to buy, carry or even possess a gun. I’m comfortable there are several other just as blatant tweaks to gun laws that need to be made.

Doing this now will remove the political spin sure to be thrown at them with vague terms like “sensible gun laws” and “common sense regulations” from our own liberal commentators Joe Gerth, Ronnie Ellis and Al Cross.

Take this opportunity and learn from the Democrats; I’m a lifetime National Rifle Association (NRA) member and have owned a gun since I was 13-years-old. I don’t think I am much different from most rural Kentuckians when I say we don’t want our gun rights trampled but where are we going to go? We know what the liberals in charge of the Democrat party would do if they had control at this time.

I am open to offering training programs like what is being seen in Texas and Ohio for teachers who wish to take the training. Under these intense programs, schools in districts that participate can designate marshals who undergo background checks and active-shooter training. This is not some insignificant, go to a weekend class or another one of the national school transportation conferences. These programs are taken very seriously and our kids are safer because of it.

It’s not clear how many marshals there are because it is a secret force; I reached out and was told the districts that have authorized them typically won’t even say they have done so — so gunmen can’t target them. Students don’t know if their teacher is a marshal. Neither do parents. It’s based on the theory of secret flight marshals — which President Donald Trump referenced last week when he first brought up the idea.

Just image of the impact of limited entry access to our schools with signs saying, “Attention: Please be aware that certain staff members are armed and trained to use whatever force needed to protect our students.”

I don’t like President Trump’s comment that small bonuses could be paid to teachers who take the training; I feel there are good strong educators who would do this because they absolutely love our children and need nothing more than knowing they are protecting them.

Texas and Ohio are far more removed from the controls of the teacher unions we have here in Kentucky so this will require little input from those entities or we will see hazardous duty pay and hundreds of thousands thrown at schools that just isn’t needed.

In Texas they spent $68,000 in one district where 13 educators were given extensive training. I remember just one of our regional schools who had a resource officer paid almost $40,000. I’m sure we could get this amount donated to schools.

Last year’s legislative session was historical for putting common sense business practices in place and we are seeing growth like few of us have ever seen. We cannot afford to allow the liberal mouth pieces to change the direction we are going simply because Republicans are too timid to stand against a strong ally, the NRA.

As Republicans consider sensible gun laws and arming educators they should simply ask themselves; where can an NRA supporter go if not for a Republican?