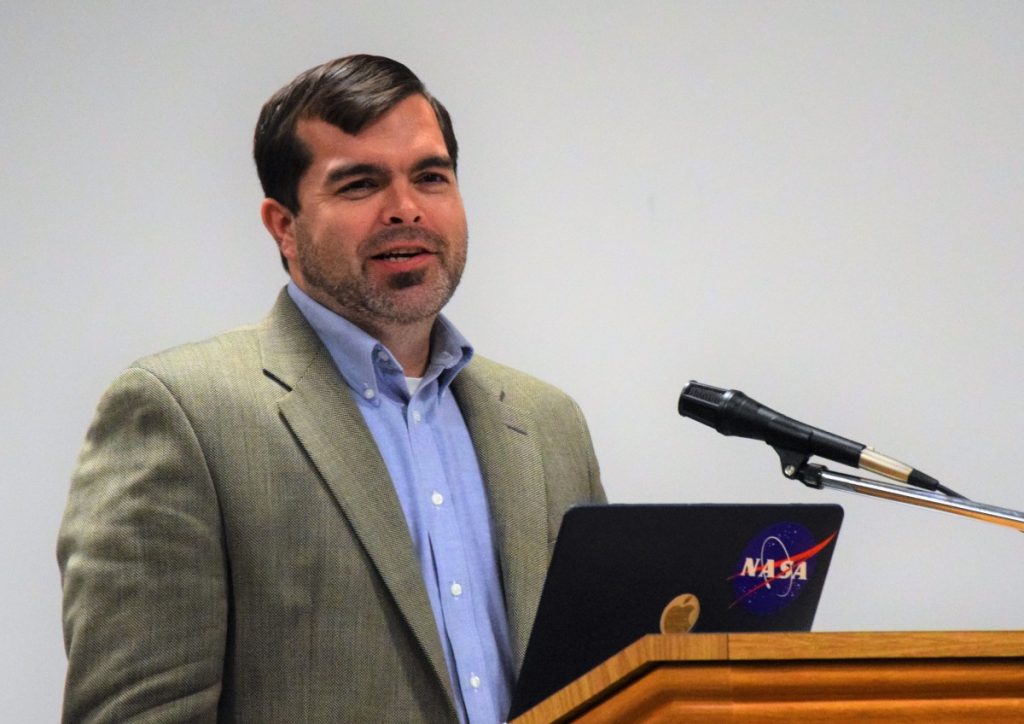 JUSTIN BROWNING of Barren County Schools was the primary speaker during a presentation about Interapt LLC, a technology training program based in Louisville. Barren County Progress photo.

It’s a familiar topic across the country: creating a lucrative, appealing community with desirable career options that entice young people to locate or remain in smaller towns. For local governments, economic developers, and even families, it’s become a universal goal with few paths already blazed. Officials grapple with it, candidates campaign on it, and educators search for the latest curriculum.

Such is the case in Glasgow and Barren County as a number of elected officials and educators promote a local collaboration with Interapt, LLC, a Louisville-based software development company. The company, headed by Ankur Gopal, teaches coding skills to both adults and students enabling them to develop mobile applications (commonly referred to as “apps”) for Apple and Android devices. Interapt conducts 24-week training for adults who are displaced workers as well as high school seniors. Once completed and certified, Interapt aids the individuals in finding jobs.

The location of the potential jobs is a selling point frequently mentioned. Computer coding theoretically can be done anywhere there is an Internet connection. Savannah Moon, a sophomore at Barren County High School, spoke at recent meetings of Barren County Fiscal Court, the City of Glasgow’s Finance Committee, and the Glasgow City Council, encouraging officials to be part of the collaborative effort. 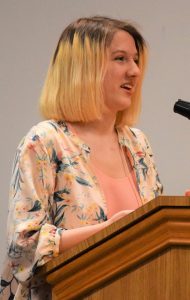 SAVANNAH MOON, a Barren County High School sophomore, spoke to the Glasgow City Council on Monday evening explaining her career ambitions and how they could be developed through Interapt. Barren County Progress photo.

Moon said she hoped to be a game designer and skills learned through the Interapt program would help prepare her for a career. She told all three groups that the idea of remaining in her home community where she could have a lucrative job was appealing.

Justin Browning, a computer science teacher at Barren County High School, told the council that Interapt chose Barren County Schools as one of 13 public school districts for a pre-internship program.

Browning explained that both Glasgow Independent Schools and Barren County Schools are in Cohort I, established by the Kentucky Department of Education as part of an effort to push computer science programs in Kentucky public schools. He termed the idea of bringing Interapt to Glasgow and Barren County as “a rare opportunity.”

Glasgow Councilman Patrick Gaunce told fellow council members that the total cost of bringing Interapt to the community was in the range of $1.8 million. As proposed, the program would train 50 adults and 50 high school seniors. He said Interapt’s training would cost roughly $8,000 for participant.

Gaunce said he hopes the collaborative effort will include the City of Glasgow, Barren County Fiscal Court, the Barren County Economic Authority (formerly known as IDEA), both local public school districts, and local philanthropists. He said he has a commitment of $100,000 from a philanthropist for the effort.

“We’ve got to diversify our economy. We simply have to,” Hale told magistrates. He said the United States currently has 490,000 unfilled computer related jobs and he believes Barren County should be at the forefront of an effort to chart the future.

“I feel this is an opportunity to create a new way of living for our next generation of Barren County citizens,” Hale said. “We have to stay ahead of the game. We can’t afford another plant closing in Barren County.”

Hale asked magistrates to contribute $30,000 to the project. At the time, he said interested parties had a goal of raising $500,000 within the local community. Magistrate Carl Dickerson asked about the commitments of BCEA and the City of Glasgow. BCEA has had no formal presentations about Interapt and as such has made no commitment.

Jackie Brown, a member of the BCEA, was asked to give his assessment of the project by Magistrate Jack London. Brown said he believed the opportunity was a good one for Barren County, asking “where else can we have a project like this?” He said he fully endorsed the project.

After some discussion, the court voted unanimously to approve the $30,000 contribution.

The City of Glasgow’s Finance Committee heard a presentation on Monday afternoon but declined to give a recommendation regarding a financial commitment to the full council.

In Paintsville, Interapt operated on the Mayo Campus of Big Sandy Community and Technical College. Barren County officials believe Western Kentucky University’s Glasgow Campus would be a logical location for the program to be housed.

The Paintsville program was viewed as a way to help workers displaced by the decline of the coal industry to master new skills that would lead to jobs in the local community.

Numerous attempts to contact Jeff Whitehead, Executive Director of EKCEP, were unsuccessful. Telephone calls to EKCEP’s offices were unanswered and the organization’s voicemail greeting stated it could receive no more voice messages. Attempts to contact Whitehead by email remain unanswered.

At the time EKCEP ended its contract with Interapt, Whitehead said in a statement, “Interapt’s hiring results have not been what we expected, and that is unacceptable. As an established technology company searching for additional technology workers, Interapt was our best option at the time for a partnership. However, the company has not lived up to its commitments, nor do we believe it has the ability to meet those expectations in the future. Therefore, we do not anticipate future contacts with the company.”

The Paintsville Herald reported that 49 students enrolled in the program. “However, only 25 students completed the initial training and internship, 13 graduates have been employed by Interapt and four with other companies.”

A graduate of the program, who declined to be identified due to her employment, said the Interapt program was worthwhile but Interapt’s efforts were not completely successful due to internal conflicts between EKCEP and Interapt.

Glasgow Councilman Patrick said he anticipates Interapt owner Ankur Gopal to attend the next meeting of Glasgow City Council which is scheduled for March 12 at 7 p.m.