When I think of my Grandma Powell, I most often envision her wearing an apron, standing at the kitchen stove. She would not be considered a gourmet chef, but she was an outstanding cook. I doubt that she even knew what Chicken Cordon Bleu or Beef Wellington were, but you would be hard pressed to find a better country cook. When sitting at her table you were gonna get the absolute best “down home” meal, prepared using recipes and methods handed down for generations from one old style cook to another. 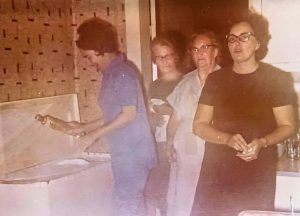 By today’s “health conscious” standards, those “healthy” cooking and eating gurus would be appalled. There was very little about Grandma’s cooking that was low calorie, low fat or low carbohydrate. As a matter of fact, lard was a critical component of Grandma’s cooking. Of course, the lard was made right there on the farm on hog killing day. She used lard to grease her pans as well as to cook with. There was no low calorie, low fat cooking spray in her kitchen, she used lard, bacon grease or possibly Crisco. Anytime she fried bacon, shsaved the “drippin’s” in a metal container which had a removable strainer that captured any crumbs or particles, so there was only pure bacon grease left. Drippin’s weren’t just used to grease skillets or muffin pans, it was used to season foods, such as green beans and pinto beans, if no ham hock was available. The pinto beans were cooked in a pot that fit down in the “deep well” burner on Grandma’s stove and slow cooked, simmering all day.

Grandma had a flour bin in the kitchen where she kept her flour and corn meal. In the old days, they took their homegrown corn and wheat to the local grist mill to have them ground into flour and cornmeal, which was stored in bulk in her flour bin. There were no sleeves of “store bought” biscuits, Grandma made them from scratch, working in a dab of lard as she kneaded the dough. Many times, I watched as she rolled out the biscuit dough on the handmade bread board that sat atop the storage compartments of the bin. She used an old tin snuff can to cut out the biscuits. Anytime she cooked biscuits, she made gravy to go with them. If she made milk gravy, she used sausage or bacon grease as the base. Whenever she fried up some of Papa’s home cured country ham, she made red eye gravy by adding coffee into the skillet with the leftover ham drippings. 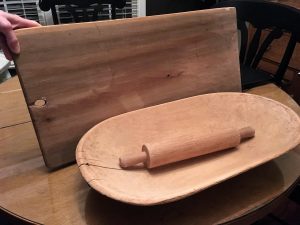 Grandma’s bread bowl, rolling pin and flour/bread board she rolled out her biscuits on. All these were handmade by my Great Uncle Jimmy Powell, Papa’s baby brother.

Grandma made her own butter from the cream Papa skimmed off the milk from their dairy cows. She put butter and sugar in the home-grown corn, as well as green peas. Of course, we slathered butter on those hot biscuits right out of the oven. Butter was also stirred into sorghum molasses to make a sweet treat to spread on biscuits for dessert. When Grandma fried jowl meat (we called it hog jaw), she poured the drippin’s into a bowl on the stove and Papa used that grease in his molasses instead of butter. Speaking of sweet treats, Grandma sliced up apples, pears or sweet potatoes, cooked them on the stove top until they were done. She greased a cooking pan with butter, spread out the cooked slices, slathered butter over them, poured the juice from the frying pan and covered them with sugar. She baked them in the oven until they began to brown, shedumped them into a bowl, scraping the thickened sugar, butter and juice mixture on top of them. There was so much sugar, they hardened as they cooled down. Grandma was also famous for her angel food cake with white sugar icing, so sugary, it crusted over when it cooled and crunched with each bite. Grandma’s sweet tea was legendarily sweet, she put two cups of sugar she always measured with the same old cracked coffee mug whose handle had broken off long ago.

As I pondered all the fat, sugar and calories previous generations consumed, I wondered how they survived. Then I remembered all the sweat and blood I expended doing the farm work and I realized how many calories were expended. Just like today’s professional football players, we had to consume all the fat and calories to maintain the strength and stamina needed. With today’s sedentary lifestyles, if we ate like Grandma’s generation, we’d blow up like blimps, as do some retired athletes who don’t modify their eating habits.