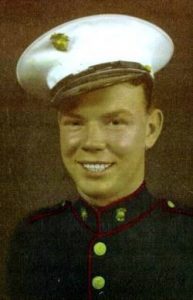 Pvt. Franklin Runyon Sousley, a native of Hill Top in Fleming County Kentucky was one of the six U.S. Marines who raised the American flag on the crest of Mount Suribachi on February 23, 1945 during the Battle for Iwo Jima.

Joe Rosenthal, an Associated Press photographer, met the soldiers along the way and made the photograph. Considering the battlefield circumstances, Rosenthal failed to get the names of the six soldiers in the photo, yet it was prized by the U.S. military. President Franklin D. Roosevelt insisted that the military identify the men. Ultimately, the soldiers were identified as Harlon Block, John Bradley, Rene Gagnon, Ira Hayes, Franklin Sousley, and Michael Strank. All were Marines except Bradley, who was a Navy corpsman.

In the meantime, the 36-day long battle continued and by the time the photograph with the identities was distributed in the United States, three of the men – Block, Sousley and Strank – had all been killed in battle.

Less than month after Rosenthal shot the photo, Sousley was killed in action at Kitano Point on March 21, 1945 by a Japanese sniper. Shot in the back, he first appeared annoyed but then collapsed as other Marines hit the ground; when a Marine asked how he was doing, he replied “Not bad, I don’t feel anything.” Seconds later, he was dead. 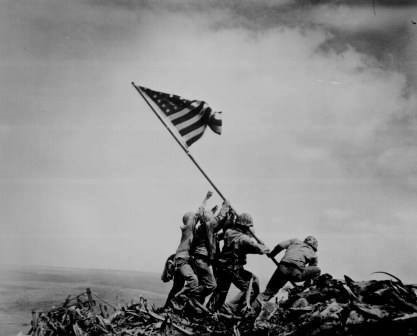 When the bloody battle was finally completed on March 26, only 200 of the original 22,000 Japanese defenders were captured alive. More than 6,500 Americans died taking Iwo Jima, and some 17,000 were wounded.

Sousley was initially buried in the Iwo Jima American Cemetery; however, upon request of his family, his remains were reburied on May 8, 1947, in the Elizaville, Kentucky Cemetery.

Rosenthal’s image became the most reproduced photo in history and won the photographer a Pultizer Prize. The U.S. Marine Corps War Memorial in Arlington, Virginia, is modeled after the photograph, using the six flag-raisers as representative of more than 70,000 U.S. Marines, Sailors, Soldiers, and Coast Guardsmen who took part in the battle.

Sam Terry’s My Kentucky column appears weekly in Jobe Publishing newspapers in celebration of Kentucky’s 225th anniversary of statehood. Past columns can be accessed at www.jpinews.com