While the legacies of pioneer explorers such as Daniel Boone, George Rogers Clark, and Simon Kenton are well-known, James Harrod’s story remains one of Kentucky history’s great mysteries. February 21 will mark the 226th anniversary of the disappearance of the founder and namesake of Kentucky’s first settlement.

Only three and a half months before Kentucky achieved statehood, Harrod set out on a hunting expedition and was never heard from again. The theories about his disappearance were plentiful and wide-ranging.

Many presumed Harrod was either killed by Native Americans or became sick and died in the wilderness while hunting. Some claimed Harrod abandoned his family and went to another part of the country. Another theory suggests Harrod had been previously married in Pennsylvania and abandoned his second family to return to his first family. Two hunters claimed they recognized him in an Indian camp near Detroit, Michigan. Harrod’s sister gave a legal deposition claiming he came to live with her.

Fifty years after his disappearance, Harrod’s friend, Henry Wilson, claimed that the pioneer told him he felt like his wife was too intimate with some of the men in the settlement. Another claimed his wife wasn’t very loving. To the contrary, other settlers said Harrod “nearly worshipped” his wife. Shortly before his disappearance, Harrod wrote a will bequeathing his estate to “my beloved wife” and the couple’s daughter.

Harrod’s wife, Ann Coburn McDonald Harrod, and their daughter Margaret believed James was murdered by a man named Bridges with whom he left to go, not on a hunting trip, but to find Jonathan Swift’s reputed silver mines with his friend Michael Stoner. At one point, a gunshot was heard in the woods and Bridges appeared to suggest that Indians had killed Harrod and it was too dangerous to go look for him.

Later, Bridges appeared in Lexington selling furs and he also sold a set of silver buttons engraved with an “H” them. The shop keeper sent them to Ann Harrod who said they were her husband’s buttons.

Friends searched the area where Harrod was last seen and found bones wrapped in sedge grass in a cave. Some claimed the bones were wearing Harrod’s shirt and the buttons w 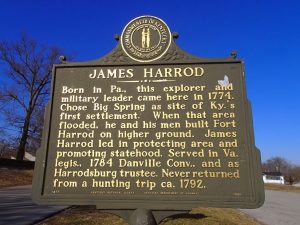 ere missing; others said there was no shirt at all. Regardless, Bridges abruptly left Harrodstown when the search party returned with their report.

Ann Harrod married a third time but oddly had her last marriage annulled on the grounds that her second husband, Harrod, was still living. There is no conclusive documentation that Ann ever heard from her husband after his disappearance.

Ann applied for a pension based on Harrod’s Revolutionary era service and claimed that he had died in a hunting accident and that his clothes had been found in a nearby river.

Sam Terry’s My Kentucky column appears weekly in Jobe Publishing newspapers in celebration of the 225th anniversary of Kentucky statehood.  Past columns can be accessed at www.jpinews.com.