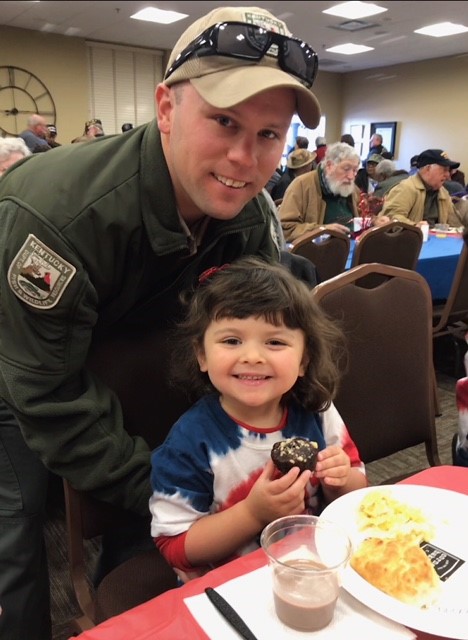 Dan Wilson and his daughter Ava.

When one encounters Glasgow resident Dan Wilson he may be wearing one of many hats in his roles in life. The Oldham County native is a Hunter Training Officer for the Kentucky Department of Fish and Wildlife Resources, a position he’s held since 2011. Wilson and three counterparts coordinate hunter education programs across the Commonwealth; he serves 30 counties stretching through the midsection of the state from the Tennessee border to the south and the Ohio River to the north.

“There’s a big need for what I do in these counties,” Wilson explained, noting that many Kentuckians in rural areas don’t have easy access to Frankfort for training for educational programs and his work takes the services of the Department of Fish and Wildlife to the people. The hunter training programs Wilson coordinates aren’t required, “you go to our courses because you want to,” he said, adding that the popularity of hunting in Kentucky makes his work all the more important.

“Sometimes people ask ‘what do you do?’ Well, this past year there were over 4,000 students that went through the courses in my 30 counties and there were over 110 courses offered in those counties. Those things don’t happen on a whim; there’s a lot of planning involved to make those classes happen,” Wilson explained. Wilson divides his time between a home office and traveling within his assigned area as needed.

To accomplish such tasks, Wilson coordinates around 300 volunteers who are scattered throughout his service region and who serve as instructors in hunter training exercises.

The free courses are offered to anyone from age 9 to 99. While many of the participants are younger, Wilson said a number of adults who’ve been hunting for years enjoy taking the courses as a refresher.

“I never feel like I’m working because it’s something I enjoy and it’s a chance to help people,” Wilson said. “I really do love what I do; it’s meaningful work.” Wilson earned a Bachelor of Science degree from the University of Kentucky and then studied for his Master’s degree at Western Kentucky University.

Wilson’s service to the community occurs in a second paid position as a Court Bailiff for the Barren County Sheriff’s Office. His work schedule in his full-time job allows him to perform the duties a couple of times a week.

In yet another role, Wilson has been a member of the Kentucky National Guard since 2012. “The National Guard was something I always wanted to do. I look at that not so much as a job but a service,” Wilson explained. He is an HIMARS section chief in the Kentucky 623rd Field Artillery Battalion.

Wilson blends his love of education and service as a volunteer at Camp Loucon, a summer camp in Leitchfield that is affiliated with the United Methodist Church. There, he mentors both young campers and adult leaders in hunter education and specialized training for situations such as an active shooter. His role isn’t limited to educational programs as he is active in doing storm repair and maintenance work at the camp.

Wilson chose Glasgow as his home base after marrying Jayne Wesley, the daughter of Jim and Sherry Wesley of Glasgow. Jayne teaches at Red Cross Elementary School where the couple’s oldest daughter is enrolled. Their younger daughter is not yet of school age.

“The things I like about Glasgow – it’s quaint, it’s quiet. I like that fact that I can go for a run at five o’clock in the morning and not running into anybody when it’s peaceful and quiet,” Wilson said. Wilson maintains that Glasgow and Barren County offer an attractive quality of life with convenient access to the offerings of larger cities if they are desired.

This is the ninth in our series, “Forty Under Forty,” highlighting 40 Barren County residents, all under the age of 40, who are bringing vitality and vision to their careers, professions, and the local community.

If you would like to suggest an individual for the “Forty Under Forty” series, send an email to progress@jpinews.com or call 270-670-3588.

Learn more about Dan Wilson and his commitment to his family, career, and community when Kellie McKay interviews him on NASH Icon 103.7