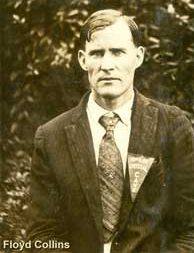 On January 30, 1925, Floyd Collins entered Sand Cave to continue his explorations and became trapped in a narrow crawlway, 55 feet below ground.

The rescue operation to save Collins became a national newspaper sensation and one of the first major news stories to be reported using the new technology of broadcast radio. William “Skeets” Miller of The Courier-Journal reported on efforts from the scene and entered the cave to interview Collins for a story that earned him a Pulitzer Prize. Miller’s stories were distributed by telegraph and published in newspapers around the country.

News of rescue attempts were carried by KDKA radio, the country’s first broadcast radio station, established only 5 years earlier. The publicity drew crowds estimated in the tens of thousands to the scene which became a carnival-like atmosphere as vendors arrived to sell food and souvenirs to the throngs of people.

Small planes flew to the scene to ferry photographic negatives to east coast newspapers begging for images of the event.* Since the nearest telegraph station was a few miles away in Cave City, two amateur radio operators with the call-signs 9BRK and 9CHG provided the link to pass information to the authorities and the press. 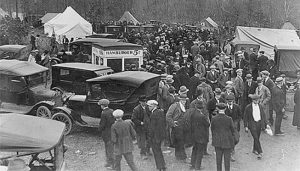 A carnival-like atmosphere emerged outside Sand Cave during Floyd Collins’ entrapment in 1925.

Having been trapped since January 30, rescuers finally reached Collins on February 17. Physicians, including Dr. C.C. Howard of Glasgow, estimated he had been dead 3-4 days from exposure and starvation. Finding that rescuers could not free his leg, it was decided that Collins’ body would not be moved but rather, the cave would become his final resting place. The newly-created shaft used in the rescue effort was filled and an open-air funeral service was held outside the cave.

Within two months, Floyd’s brother, Homer became dissatisfied with the idea of his brother being buried in Sand Cave and re-opened the shaft and began digging a new tunnel to Floyd’s body. On April 25, Homer recovered his brother’s remains and his casketed body was buried on the Collins farm.

Two years later, Lee Collins sold his family’s farm which included the cave and the burial site of Floyd Collins. The enterprising new owner placed the body in a glass-topped coffin and displayed it in Crystal Cave as a tourist attraction. Sometime in the night of March 18-19, 1929, Floyd Collins’ body was stolen but was later recovered in a nearby field – but his injured left leg was missing. The remains were placed in a chained casket placed in a secluded portion of Crystal Cave. Mammoth Cave National Park purchased the land and years later, at the urging of the Collins family, the casket was removed and buried at Mammoth Cave Baptist Church. 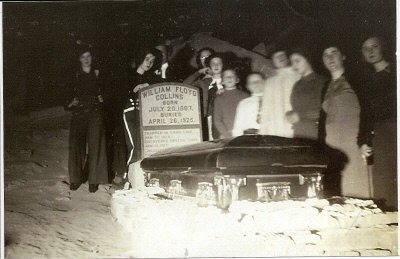 Cave tourists gather around the coffin and gravestone of Floyd Collins during the time his remains were displayed in Crystal Cave.

The Floyd Collins entrapment and death has been ranked as the third biggest news story between the World Wars, numbers 1 and 2 being Lindbergh’s transatlantic flight and the kidnapping of Linbergh’s son, respectively.

*AN ADDENDUM: For some 40 years, one of the sensational parts of the Floyd Collins tragedy was that Charles Lindbergh was hired by a newspaper to fly photographic negatives of the scene back to east coast. Upon further research, each instance of the tale traces to a Cave City resident known for spinning an entertaining yarn. Documents show that Charles Lindberg was a 23-year old air cadet in San Antonio when the Collins event took place making it highly unlikely that Lindberg played a role in the event. Further, Lindbergh’s biographers never mention the Floyd Collins story in reviewing the aviator’s life.