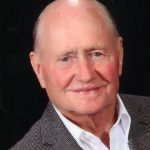 When Charles Wesley Strader graduated from Hiseville High School in 1955, the school yearbook included a prophecy for 10 years down the road: that he would have finished college, become a coach at Western, and would become as widely known as Coach E.A. Diddle.

In reality, Strader attended WKU and graduated from the University of Kentucky. He also became as widely known as the legendary coach, not for coaching, but as “The Voice of the Hilltoppers” for nearly four decades.

Familiarly known as “Wes,” Strader died on Tuesday, January 9 at age 79. He was the son of the late Charles and Martha Coppage Strader, and grew up on the family farm situated on the edge of Hiseville. His father and uncles Sam, B.W. “Brownie,” and Bruce operated Strader’s Dairy, a milk processor and distributor of dairy products serving much of the region. 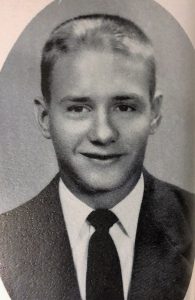 WES STRADER as a Senior at Hiseville High School in 1955.

During his years at Hiseville High School, Strader was captain of the 6-man football team, played basketball and ran track and was president of the school’s Future Farmers of America chapter. However, farming and the family business were not his career choices.

In the autumn of 1955, Strader enrolled at Western Kentucky State Teacher’s College and studied there for three years before transferring to the University of Kentucky where he earned a degree in radio arts. While attending the Bowling Green school, he worked at Glasgow’s WKAY, marking the beginning of his radio career. During his time at UK, he began doing play-by-play athletic coverage, first for the campus station, then the UK Network and covering high school games in Frankfort.

Returning to south central Kentucky, Strader began doing play-by-play coverage of Western’s Hilltoppers for WKCT in Bowling Green in 1964.  The first game he announced was on a evening of firsts. It was Head Coach John Oldham’s first game having taken over from Coach Diddle who had retired. On the floor that night was future All American Clem Haskins making his first varsity appearance. The combination of Strader and Hilltopper basketball was a hit. 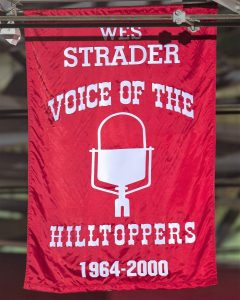 From 1964 to 2000, Strader was “The Voice of the Hilltoppers” who shared play-by-play action for Western basketball and football fans and along the way, became as much a part of the school’s athletics program as Coach Diddle’s celebrated red towel. During those years, Western was afforded university status to become WKU and during the 1970-71 season, the basketball team made its first Final Four appearance led by Jim McDaniel and Clarence Glover.

In 2000, Strader began an eight-year stint hosting a post-game radio call-in show while continuing his popular sports talk show on WBLG. In 2008, he began hosting pre-game and post-game call-in shows and continued until last fall. 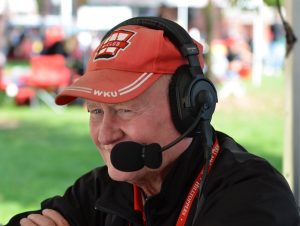 During his radio career, Strader became one of Kentucky’s iconic sports broadcasters. In 2002, he was inducted into the Kentucky Athletics Hall of Fame. He is also a member of the Kentucky Broadcaster’s Association Hall of Fame and the Kentucky Journalism Hall of Fame. In 2013, Strader was given the unique honor of a banner hanging in E.A. Diddle Arena alongside notable WKU athletes and coaches; it is the only banner for a non-player or former coach.

Strader was memorialized in funeral services Tuesday in Bowling Green with burial in Glasgow Municipal Cemetery.