The buildings on a farm generally have specific purposes. Usually there are at least a couple of large barns along with several outbuildings or sheds. One of those outbuildings is generally a chicken coop. These vary in size depending upon how many laying hens are owned. The inside walls are lined with rows of shelves that are divided into bin-like squares filled with straw for the nesting hens. In my Grandma’s chicken coop there was a rack like structure on one end, on which the chickens could “roost” when not sitting on the nest. There was a walk-through door that opened to the back yard and a small door that opened to the pasture, out which we “shooed” the hens when we collected the eggs. 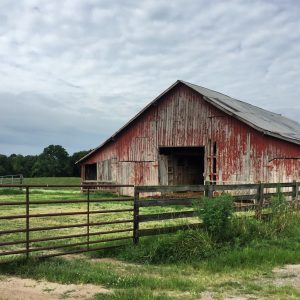 Also among the outbuildings was a tool shed where Papa stored all sorts of implements, hand tools and parts. As a kid it held a treasure trove of all kinds of tools and hardware for me to play with and occasionally get into trouble. I think, by far, the most significant outbuilding was the smoke house. This was Papa’s private headquarters for curing all the meats from hog killing day, but most especially the hams, for which he was well known. Whether his methods were secret or he just wanted us grandkids out of his hair when he was busy, we all knew the smoke house was “off limits.” Papa’s cured meats were the best I have ever eaten and still, to this day, wish I had one of his hams.

If tobacco was raised on the farm, a tobacco barn was essential. In this barn was stored the tobacco sticks, baskets, coke heaters and anything used in the raising and curing processes. The interior was a maze of tier poles used for hanging tobacco for the drying/curing process. They ran the entire length and breadth, as well as all the way to the tin roof. I personally never smoked, chewed nor dipped tobacco, but I dearly love the smell of tobacco curing in the barn. Probably because it brings back so many fond memories working side by side with loved ones who are no longer with us, it’s surely not that I miss all the sweat and blood I expended while working in the tobacco field and barn. 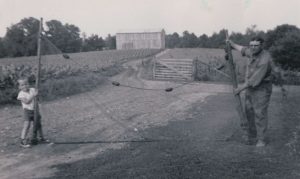 TAKEN ON JULY 07, 1955, my big brother, Steve, and Papa, with the tobacco barn in the background. You can also see the tobacco field behind Steve. Photo courtesy of Joyce Buster.

Usually the largest barn on the farm was the feed barn. I actually think this a misnomer as this building had multiple functions. Of course, hay used to feed horses, mules and cattle was stored in the loft and corn used to feed chickens and fatten hogs was stored in the corn crib. There was a “runway” on one side that ran the length of the barn with doors front and rear, into which cows were herded for milking. There were hay racks along the inner wall of that runway, that were open at the top to the loft so you could easily toss hay down at milking time. In the middle of the barn was the “main” runway. On the right side of that runway was a row off stalls for housing and bedding down the horses and mules. To the left was the gear room, stairway to the loft and behind that, the corn crib. In the gear room were the saddles, blankets, bridles, harnesses, reins and all equipment necessary for hooking the mules to the wagons and implements. On the other side of the barn was storage for wagons, implements and, in later years, the tractor. Above those items, tier poles were also installed to be used for overflow from the tobacco barn. This was definitely the most essential of all the farm buildings. 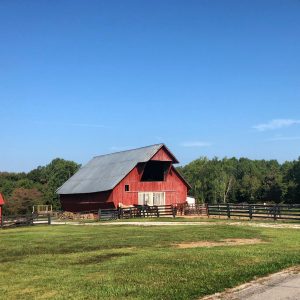 I recall Papa talking about barn “raisings” in a time long gone. Back then, when you or your neighbor needed a barn, everybody came together to build it. A portable sawmill was set up and lumber was milled from timber on the farm. While the men were constructing the barn, the womenfolk came as volunteers as well, helping to cook and serve the midday and supper meals. Papa’s tobacco barn was built in the spring of ‘46, just in time for Daddy to help when he returned from the war. Great Uncle Jimmy, Papa’s baby brother, had all the lumber cut for the build before the first nail was driven. Papa told a story of Uncle Jimmy hanging tier poles high up in the barn and one of them needed trimming to fit. He hollered down for Papa to throw him an axe, which he did, without hesitation. This was a double-bladed axe, which Uncle Jimmy had sharpened and when he sharpened an axe, “it wouldn’t just cut a foot, it would cut it plum off.” After trimming the pole, he tossed it back down to Papa, who caught it, because the blade should never hit the ground. Such was the trust between the two brothers. 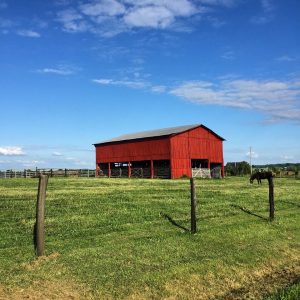 In a time when money was so hard to come by, farmers were able to afford the buildings they needed while promoting an atmosphere of “community” and friendship amongst all the neighbors, helping one another survive and thrive through the hard times. I wish we had more of that neighborly attitude in today’s environment.