On January 6, 1920, Kentucky became the 23rd state to officially ratify the 19th Amendment to the United States Constitution giving women the right to vote. The Commonwealth’s new governor, Edwin P. Morrow, had been in office less than thirty days when he signed the bill ratifying the legislation. A Republican, Morrow had campaigned on a progressive platform advocating the legislation granting women’s suffrage.

In 1888, Laura Clay urged suffrage groups in Louisville, Lexington, Richmond, and Northern Kentucky to unite in their efforts. The Kentucky Equal Rights Association (KERA) was organized with four of Cassius Clay’s daughters – Anne, Sally, Mary Barr, and Laura – as charter members. While the Clay daughters were leading the movement for women’s voting rights, and educational, legal, and industrial equality, the “Lion of White Hall” was an outspoken opponent of women’s suffrage maintaining that it was contrary to moral, political, and scientific traditions.

KERA members were diligent in their efforts. Within two years of their organization, members had collected 10,000 signatures on a petition presented to the Kentucky General Assembly advocating for women’s suffrage. Within seven years, their membership roll grew from 66 to 400 members.

Some of KERA’s accomplishments included:
• The school suffrage act which gave women in Kentucky’s second class cities (Lexington, Newport, and Covington) the right to vote in local school board elections. The law was rescinded in 1902 after efforts by African-American women exerted too much of an impact on elections.
• Lobbying Transylvania University leaders to accept female students, a goal accomplished in 1889 after more than 100 years of all-male students. As a result, several other Kentucky colleges followed suit and began welcoming female students.
• Advocated for women consigned to Kentucky asylums, including convincing the General Assembly that female physicians should be on staff at all such facilities for the benefit of female patients.
• Passage of legislation establishing reform schools for boys and girls.
• Establishment of the first juvenile courts in the Commonwealth.
• Establishment of Kentucky’s first child labor laws.
• Raising the age of consent from twelve to sixteen. 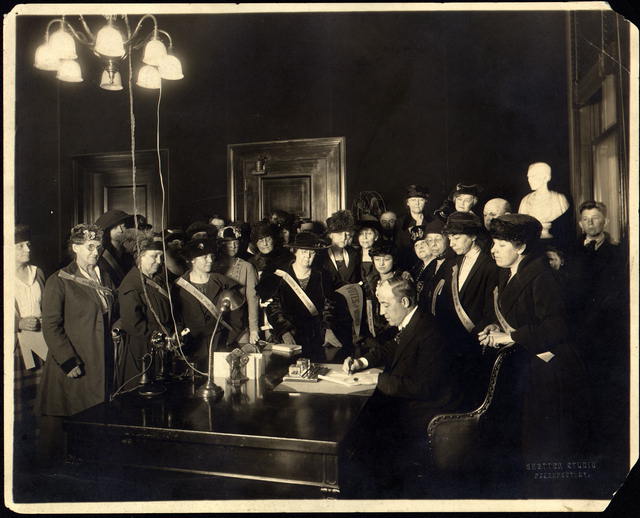 On June 4, 1919, the U.S. Senate passed the 19th Amendment by only two votes over the required two-thirds majority, 56-25. Within a week several states ratified the amendment but the momentum slowed as Alabama, Georgia, Louisiana, Maryland, Mississippi, South Carolina, and Virginia all refused to ratify the legislation. At the end of 1919, twenty-two states had given stamps of approval to the 19th Amendment.

Meanwhile, Kentucky inaugurated Gov. Edwin P. Morrow on December 9, 1919 and within in days the legislature took up the proposed legislation. After contentious debate, the Kentucky House of Representatives voted for ratification by a vote of 72 to 25; the Kentucky Senate voted 30-8 in favor.

Kentucky became the twenty-third state to ratify the 19th amendment on December 6, 1920.

Only four southern states were among the required 36 for the 19th Amendment to become law. Missouri, Arkansas, and Kentucky were joined by Tennessee on August 18, 1920. After days of debate, the Tennessee House of Representatives was tied 48-48. Rep. Harry T. Burn, only 23 years old, received a note from his mother that read: “Don’t forget to be a good boy and help Mrs. Catt put the rat in ratification.” Burn changed his vote on the next ballot, approving ratification and changing American history. The 19th Amendment was certified by the U.S. Secretary of State on August 26, 1920.

The Kentucky Equal Rights Association voted in January 1920 that when the constitutional amendment was complete, the organization would become the Kentucky League of Women Voters.

Sam Terry’s My Kentucky column appears weekly in Jobe Publishing newspapers in celebration of the 225th anniversary of Kentucky’s statehood.