On September 16, 2016, Jamie Houchen came to a conclusion: her life wasn’t worth living. However, she awakened the following morning and decided to change her life. “I thought ‘I have to love myself.’ That meant I had to stop killing myself with food,” Jamie recalls. 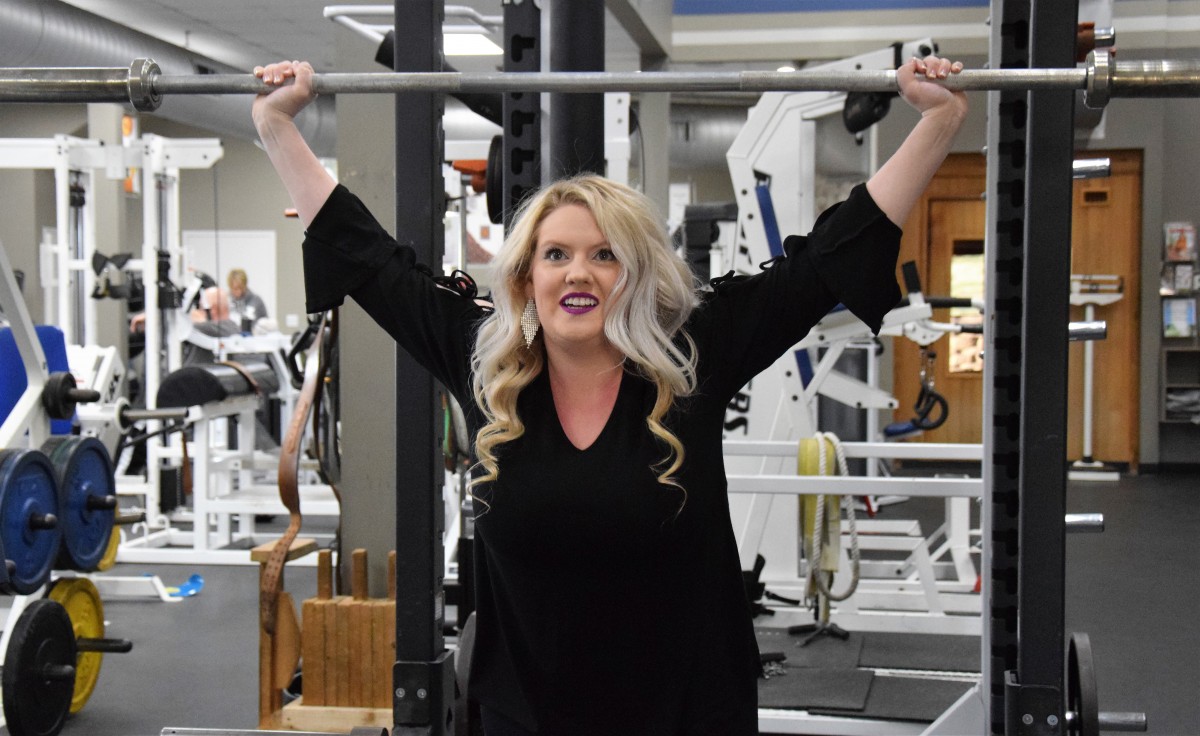 JAMIE HOUCHEN of Glasgow has been on a mission to improve her life by losing weight and changing her lifestyle. Since September 2016, Houchen has shed more than 116 pounds to reveal a new, healthier version of herself. Sam Terry / Jobe Publishing photo.

At age 28, Jamie found herself morbidly obese and miserable. “I realized that food and my obesity were controlling my life. The reason I used to get up out of bed in the morning was because I looked forward to eating. I hated my life,” Jamie explained recently.

“When your weight tells you where you can go out to eat because you can’t fit into a booth in restaurants, it’s controlling you. Getting on an airplane was terrifying because I knew I was going to have to ask for a seatbelt extender. I couldn’t go on a cave walk with my friends because I couldn’t get through some parts of the cave,” Jamie reflected. “It was time to take charge. I woke up that morning and decided to give myself the best I know and the best I can.” 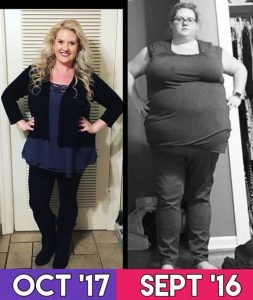 To get her battle underway, Jamie spent the first six months constantly motivating herself. “All I did was try to make it through the day without eating carbs and sugar and I stopped going through a drive-thru to use food to fight my depression,” Jamie says.

“I didn’t share a lot with my family or friends about what I was doing. It was my thing – this was my mission. I went to Subway on the Glasgow square because they have tables and I couldn’t fit in a booth in other restaurants. I was determined that I was going to eat a salad every day and I wasn’t going to eat processed food. I focused on eating whole foods – real foods – and not eating junk,” Jamie says.

At family gatherings and social functions, “I quit eating and I didn’t explain why to anyone. I became so headstrong that I was going to change my life that I blocked out the world. I was on a mission.” Recalling her journey, Jamie said she lost 60 pounds and no one even noticed, not even her family, realizing, “when you’re really fat, losing a lot of weight isn’t noticeable.”

Star of the Show 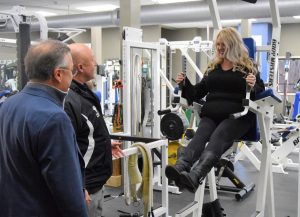 “Every day people focus on different things: being a good parent or a good spouse or a good worker bee at your company. I decided I was going to focus on loving myself. It’s my life and it’s worth living so I’m going give it my best and try. When I’m having a bad day or a bad week, I remind myself that all I have to do is try,” Jamie said recently while working out.

“I realized I’m never going to be perfect because perfect doesn’t exist with humans. I started going to therapy. I started seeing a nutritionist. I became a warrior and took charge of my life,” Jamie recalls.

Jumping on the Subway 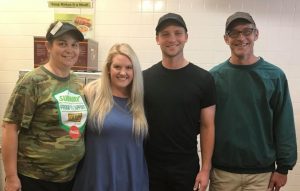 THE STAFF OF SUBWAY ON THE SQUARE became part of Jamie Houchen’s faithful supporters in her effort to lose weight. From left to right, Rhonda Sue Claywell, Houchen, Steely Harris, and Greg Harris.

Glasgow’s downtown Subway restaurant became an integral part of Jamie’s journey. Not only did the eatery help her eat healthy foods every day, it became her outlet to the world. “I work at home so I don’t have co-workers I see every day. I could easily go days and not have face-to-face interaction with people. The Subway employees became the people I interacted with daily,” Jamie said recently.

While in line at the restaurant, Jamie encountered Glasgow businessman Larry Glass who also eats lunch there each day. “I began talking to Larry. It wasn’t a planned thing and we didn’t know each other but we began talking,” Jamie recalls.

“Jamie told me about her weight loss effort and I told her about my having battled cancer,” Glass says. “I realize there’s more to developing a good, healthy lifestyle than just changing how you eat. It’s also important to incorporate exercise into your lifestyle.” 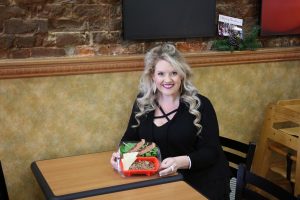 THE DOWNTOWN SQUARE location of Subway in Glasgow is Houchen’s daily eatery. She initially chose the restaurant because it had tables and chairs and her weight prevented her from fitting in booths elsewhere.

As the two talked nearly each day, Glass realized that Jamie needed to expand her life change to include exercise. “I wanted to connect Jamie to Brett Underwood at Extreme Fitness. He’s the only personal trainer I know of in this area who has the educational background and experience,” Glass says. He owns a number of area businesses including Extreme Fitness and Extreme Fitness for Women that serve Barren and surround counties.

“I’ve owned this facility [Extreme Fitness] for around 18 years and I never used it until a couple of years ago. I had cancer, chemo for six months, and it hit me that I could die,” Glass said.

“It took a health scare to wake me up and make me want to do this. If I hadn’t had cancer and hadn’t owned this business, I might never have taken the time to do this.”

Glass now works out at Extreme Fitness for an hour-and-a-half every day. “I always thought I never had time to do this. However, we find the time to do the things we enjoy doing and some of those things aren’t very healthy. The greatest thing God has given all of us is the human body and we need to take care of it,” Glass said. “I work out now and I love it. I can’t live without it now. This year I just ran a 5K race for the first time in 36 years.” 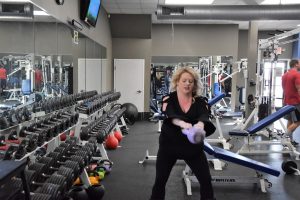 At the health facility, Glass introduced Jamie to Underwood who began developing a fitness plan. “Any person I train, I try to find something that fits them and their limitations and then build on their successes. It’s a process. It takes time,” Underwood explained.

“One of the best things Brett did for me was set me up for success. He’s not going to let me fail. He didn’t tell me to do things he knew I wasn’t going to be able to do,” Jamie recalls. “People talk about feeling intimidated about coming to the gym. I wasn’t like that. I already knew I was fat. It wasn’t like anybody was going to throw that in my face.” 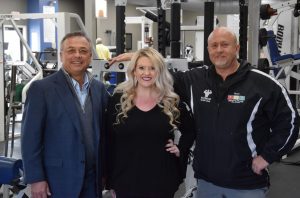 For Jamie, the intimidating thing was fear that she wouldn’t fit on some of the equipment at the gym. “I remember thinking ‘I’m going to break this’ but Brett would remind me that he wasn’t going to let me fail. That’s exactly what I needed. Coming from being morbidly obese, exercising helped me become mobile and flexible,”

From cage to instrument

“I used to think of my body as a cage for the soul. Now, I view it as an instrument. I’m now a mobile, flexible, able-bodied person. My body is an instrument for me now while before it was truly a cage because I couldn’t move and it was awful,” Jamie reflected recently.

“Brett has become someone I can share my goals with. Not so much weight loss goals and that sort of thing. For example, Brett knows I have a goal of being like a boss-lady and being able to carry a canoe over my head down to the creek,” Jamie explained.

As a personal trainer, Underwood says people frequently ask him “who are you torturing today?” He has a completely different outlook on working out. “That concept kind of makes me cringe. I don’t look at it as torture. Yes, it can be hard, it can be difficult, and it can be challenging. I’m not here to make people intentionally suffer. The benefits greatly outweigh the challenges.”

“I’m convinced that was this gym has brought to me is so much more than the ABCs of exercising,” Jamie contends. “I found that the people I used to think would never want to talk to me or that I didn’t want to talk to because I was terrified of them, they’ve become my best cheerleaders. For example, the bikini competitors. I used to look at them and think they’re just naturally thin or that they don’t struggle like I do.”

Those assumptions have been proven false. “I now see them in here busting their butt harder than anyone. I’m like, ‘if they can kill it for that long, then you better believe I’m going to get in here for an hour and try.’ Jamie said.

HOUCHEN’S FRIENDS celebrated her loss of 100 pounds in October 2017 and presented her with a crown. Submitted photo.

“For example, Brooke Glass, one of the bikini competitors that I admire so much, told me that I was her inspiration to keep training,” Jamie said, choking back tears. “To think that I could inspire someone is so humbling.”

“When I lost 100 pounds, we had a party,” Jamie recalled. “My dad got on the bandwagon and he’s lost 40 pounds and my mom has lost about 20 pounds. Now, they get it and they’re so supportive.”

A new year, a new chance

“Most people come up with New Year’s resolutions that last about 30 days and then it’s over,” Glass said. He contends that individuals deciding to make lifestyle changes have to be patient. “Becoming healthier is not a 100-yard dash. It’s a marathon. You have to stay with it. I’m sure there were days Jamie was ready to throw her hands up and quit. But, she stayed with it because she could see her progress and she could feel her progress because she can now move.”

Glass and Underwood say they notice people using Extreme Fitness for therapy after a heart attack or a debilitating fall. “What we see is people realizing how much exercising helps them and they don’t want to stop. It’s amazing how many 70+ year olds who’ve never darkened the door of gym but something happens and they come here and it becomes a major change in their life,” Glass said. 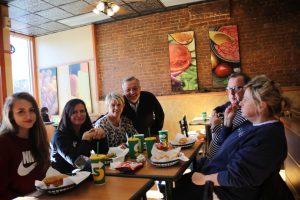 EXTREME FITNESS OWNER LARRY GLASS decided to celebrate Jamie’s success and give local residents the gift of a healthy meal last week when he partnered with Subway on the Square to provide free sandwiches for an entire day. Subway owner Greg Harris said the promotion became his store’s biggest day in history with more than 500 patrons taking advantage of the offer. Submitted photo.

Underwood agrees. “Many people who are out of shape don’t really realize how limited they are. Watching people who don’t take care of themselves, I think what all they are missing.”

“We strive for sustainability. You can’t come in and do it all at once. You’ve got to lo 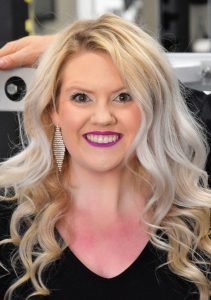 ok at the big picture and realize you’re on a long path.”

Jamie contends that deciding when and where to start a weight loss journey can become such a challenge that they do nothing. “It’s so overwhelming! I’ve been there and I get it. Just start! Not tomorrow. Not after Christmas or some other date. Now – today, from this moment forward,” she recently advised in a social media post.

“Love yourself. Nourish yourself. Know that you are worth the absolute best. Believe in yourself. And, if you need help, get it!”