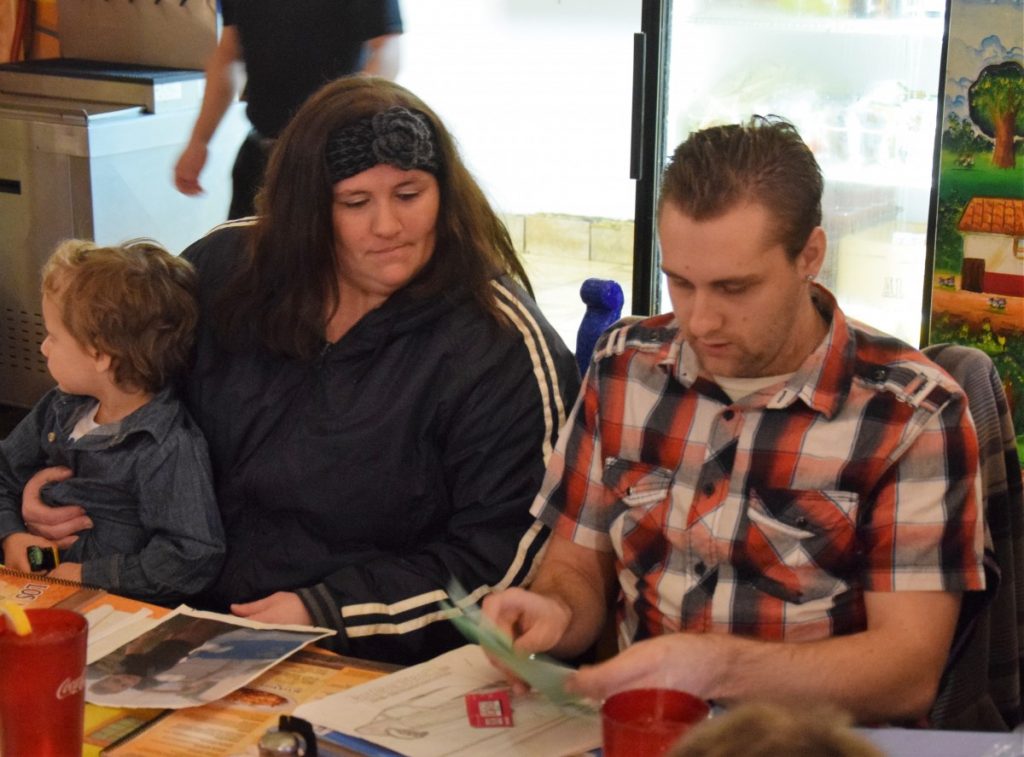 Daniel Pyanowski shows memorabilia of his high school years to his birth mother, Carolyn Ramos, when they met for the first time in fifteen years.

Daniel Pyanowski received a long-awaited Christmas gift last Saturday when the 20-year-old he saw his mother for the first time since he was 6 years old. Last weekend, Daniel anxiously awaited the arrival of his birth mother, Carolyn Ramos, at Glasgow’s Los Mariachis restaurant. At one end of the table sat Sandy Markus, his foster mother since age 15, while the other end of the long table was filled with other teenagers fostered by Markus, and in the middle Daniel waited with vacant seats ready for a Christmas gift never to be forgotten.

While nervously checking his phone for text messages updating him on the approach of his birth family, Daniel explained that when he last saw his mother 15 years ago, his name was Daniel Leo Kelly. During those years, he was adopted and given a new name – Jonathan Daniel Pyanowski – which he still uses. Since age 15, he has been in a foster care setting in the home of Markus and her husband, John, who guided the teenager through the years of high school and typical life experiences. Daniel is a graduate of Barren County High School and the Carl Perkins Technical College in Thelma, Kentucky. About to turn 21 years old, Daniel is now employed by LSC, more familiarly known as R.R. Donnelley in Glasgow.

Along his journey, Daniel came to know his birth father who lives in Glasgow, a man who never forgot his young son as evidenced by Daniel’s face tattooed on his upper arm as a constant reminder. Through that relationship, Daniel learned he had a half-brother through his father. Forever in his mind, Daniel had vivid memories of an older brother whom he remembered fondly and last saw when he was 7 years old. Still, there was a desire to find his mother.

Simultaneously, Ramos, who lives in Albany, Kentucky, and her family searched to find Daniel but had little success. The key information Ramos didn’t have was that Daniel’s name was changed and various resources listed him by his adoptive first and last name. Thanks to the power of social media, Daniel’s aunt in Columbia, Kentucky began piecing together more of the story and on Facebook encountered Daniel, realizing he was her nephew. In turn, Ramos and Daniel connected via computer last Friday and spent hours communicating online and on the telephone. They quickly made plans to meet on Saturday.

Just after 11 a.m., Ramos arrived, accompanied by another son, Justin Barker and his family, where mother and son tearfully hugged one another after 15 years and a lot of life experiences spent apart. Clearly, there was a lot of history to be covered and Daniel came prepared with valued photo albums Markus has helped him maintain. Every page offered another remembrance of his life to share with his mother: his prom photo, the burgundy and gold tassel from his graduation from Barren County High School, mementos of any number of experiences.

Once again reunited, Daniel and Justin found a common denominator: both young men were involved in the Junior ROTC programs during their high school years. Now both young adults, they compared their work and their interests. Daniel also discovered that he had yet another half-brother through his mother.

Undoubtedly overwhelmed by the joy of being reunited and catching up on years spent apart, Ramos wrapped her arm around Daniel’s shoulder as he rested his head against hers – a Christmas gift never to be forgotten.