My much beloved cousin, Wayne Elmore, was affectionately called the Hoodlum. How he received this moniker has been debated, but the most likely origin was my Mother. At the time, Wayne had recently returned from serving in the Army in Vietnam, his marriage had fallen apart while he was overseas and instead of getting a hero’s welcome, returning soldiers were spat upon and called baby killers. Maybe feeling the need to be a little rebellious or wanting to shed the clean-cut military look, he let his hair grow long, grew a Fu Manchu mustache and pork chop sideburns. He drove his ’66 Dodge Charger way too fast with his 8-track tape player blaring Mendocino by the Sir Douglas Quintet way too loud. Some would say his “wild hair” was showing. My brother, Steve, was in college at WKU and began hanging out with his older cousin and as Mom would put it, ripping and roaring in his ’57 Chevy. Mom was afraid her boy was gonna be corrupted by his cousin, who was acting like a “hoodlum.” My Daddy, who never let an opportunity to needle someone slip away, from that day forward, laughingly addressed Wayne as the Hoodlum, and it sorta stuck. 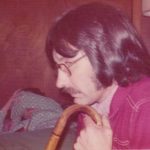 Fast forward 30-40 years, Wayne was happily married, a father and grandfather, dedicated Christian, Mason and very hardworking family man. He was still lovingly referred to as the Hoodlum, even though his life couldn’t have been farther from the image that nickname brings to mind. He drove a tanker truck for a living and besides his family, his God and his country, he loved deer hunting, so much he saved his vacation time so he can spend it in the woods during deer season. In 2002 he had a severe accident involving the power take-off of his truck, with his right arm being virtually torn to shreds. So severely damaged was his arm that all but one Orthopedic Specialist wanted to amputate it at the shoulder. In a series of surgeries, doctors had to take bone, muscle, tissue and skin from other parts of his body to rebuild his arm. Just days after his accident, I parked the big truck on the street and went to see him at the hospital in Louisville. He was all bandaged up with his arm in suspension, in an all-out effort to save the arm. The first thing out of his mouth when I walked into his room was that he was afraid his deer hunting days were over! Imagine that, facing a multitude of surgeries and months upon months of recuperation and therapy, even with all that he could still lose his arm, and what was he concerned about, that he’d never hunt again. I told him that should be the least of his worries, he needed to focus on healing and regaining some use of that patchwork arm. However, he still lamented that he may never go deer hunting again.

After leaving the hospital, all I could think about was Wayne’s sorrow over not being able to hunt, so I decided to do something about it. I called my brother, Steve, and told him we needed to build Wayne a handicap friendly deer hunting stand down on the farm. He was all in, as was my nephew, Steve’s son, Andy. Steve in turn, contacted our cousin, David Powell, and told him of our plans. He wanted to be a part of it as well, as did his son, Chase. David had built an elevated hunting “house” on his farm and we decided to use his experience as a basis for the Hoodlum’s shooting house. 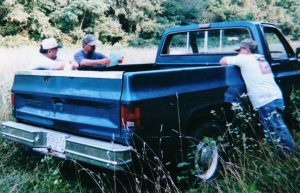 Going over the plans, from left to right – Clinton, David and Chase Powell.

On July 2nd, the five of us met at the farm, scouted and decided on the best location. We drew out a basic design and began clearing underbrush to prep the site for construction. Andy came up with old telephone poles for corner supports. Steve got a lot of the needed lumber from his father-in-law, Bill (Will Turner) Norris, who had salvaged 100+ year old hardwood lumber from an old log-built home he had torn down on his farm. David brought old roofing tin that he had salvaged and heavy-duty pallets for the floor foundation. Having all these donated materials was a big plus as we were on a very tight budget.

It seemed that all five members of the “Powell Construction Crew” seldom got to the farm on the same day, often only two or three of us were working at any time. My cousin, David, and his son, Chase, did most of the work getting the posts set in concrete, then installing the floor joists and rafters, as well as putting the roof on, with occasional assistance from the others.

We soon found out that driving nails into that more than a century old lumber was problematic, we bent a lot of nails, even having some “explode.” We decided to use wood screws, but screwing them in by hand was impossible. There was no electricity down at the swamp, so cordless power tools were a necessity. My wife came to the rescue and bought a nice DeWalt set that included screwdriver, drill, circular saw and reciprocating saw, along with some extra batteries, all of which were put to good use. Getting screws into the rock-hard lumber was difficult even with power tools, if we didn’t strip the heads, they twisted in two. We had to drill pilot holes for every screw. It was a tedious process and we destroyed a lot of drill bits and saw blades, but we had a successful strategy. 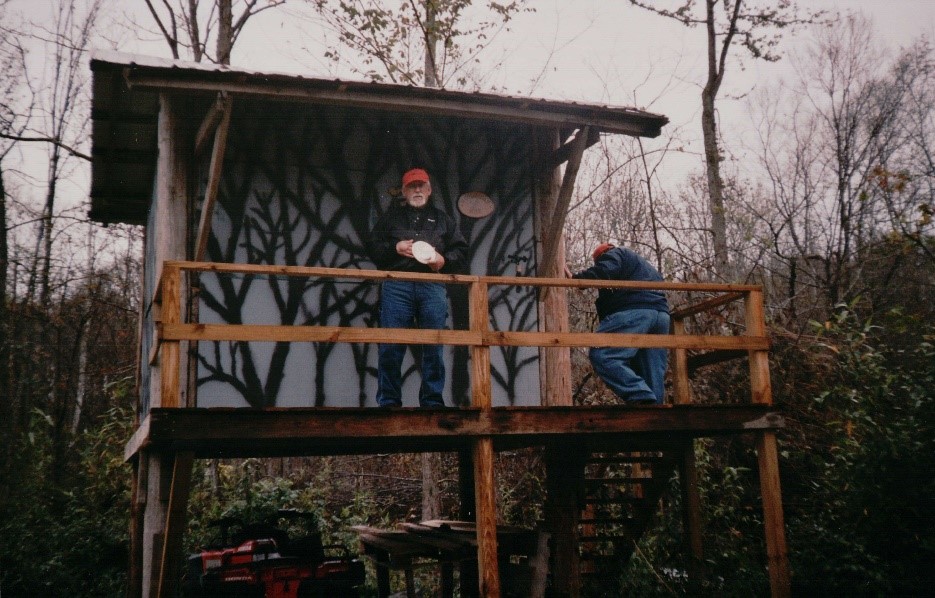 Wayne standing on the deck of Hoodlum’s Hut, Clinton going down steps.

My brother and nephew thought I was crazy when I told them I wanted to put a small deck across the front of the “hut,” but I insisted. We bought seasoned posts and decking boards for the deck and “handicap friendly” stairs. We spent the entire summer and into the fall of 2003 completing the project, making sure everything was usable by someone with only one “good” arm. We put hinges on the top side of the shooting window closures, with my wife coming up with the idea of mounting a heavy dowel rod on a swivel at the bottom of the window cover. With one arm, the windows were easily opened pushing the dowel rod outward until it sat into a notch we had cut in the windowsill. We put a handrail all around the deck and on the stairs so Wayne could use his good arm to help pull himself up the steps. We also made the risers short enough a person could very easily ascend them. Speaking of convenience, the youngest and seemingly brightest of our crew, Chase, came up with a plan and design for a very necessary item. We put a drum underground, surrounded by gravel as a leaching pool, ran a hose up through the floor attaching it to a funnel that was mounted in one corner. Just like that, the hut had a “redneck” potty station.

With the construction complete, we needed to paint the exterior for weatherproofing and my brother said it should be a camouflage pattern. As deer season is in winter, I thought painting it gray to match gray winter skies, then break it up a little by using black spray paint to mimic barren trees and limbs. When the painting was done, I got a bit of ribbing as everybody thought I went a little overboard with my “treescapes.”

We kept this project secret from Wayne up until we took him to see it. I told him I had prepared an “awards” presentation (which I really did) for the hunters in our family and it would be a hoot, as many of the awards were gags. Additionally, we told him about a lot of storm damage in the woods that spring and summer which he needed to see for himself as much of the landscape had changed. I convinced him to come, so I drove to Louisville on November 15 to bring him down for the program. Upon arrival at the farm, we were all so anxious for Wayne to see the hut, we took him to see the “storm damage” first. It was a pretty emotional “reveal” when we showed him the hut and he realized what we’d done so he could resume hunting. He commented “it’s big enough to put in a bed!” We informed him the hut had already been tested and had a seal of approval, because the previous weekend, my nephew, Andy, shot a buck from the stand.

Wayne was unable to hunt that season as he was still undergoing treatment and surgeries on his arm, however he used it quite effectively each year thereafter. He took it further than any of us expected, he brought in a cot, a camp heater and even brewed his morning coffee in the hut. I was also vindicated for my insistence on the deck, as he was seen many mornings during deer season, sitting in a camp chair on the deck, with his feet propped up on the rail, sipping his coffee. Unfortunately, we lost Wayne in 2008, but we were comforted in the fact we had some small part in making his last few years a bit brighter. I’m supremely confident that our beloved cousin is appreciating the fact that his son, Tommy, and granddaughter, Makenzie, are continuing the tradition and hunting from “Hoodlum’s Hut.”

At this time of year, I am reminded of how thankful I am for family and the bonds we hold so dear. As I look back on my life, building Hoodlum’s Hut is one my proudest achievements. 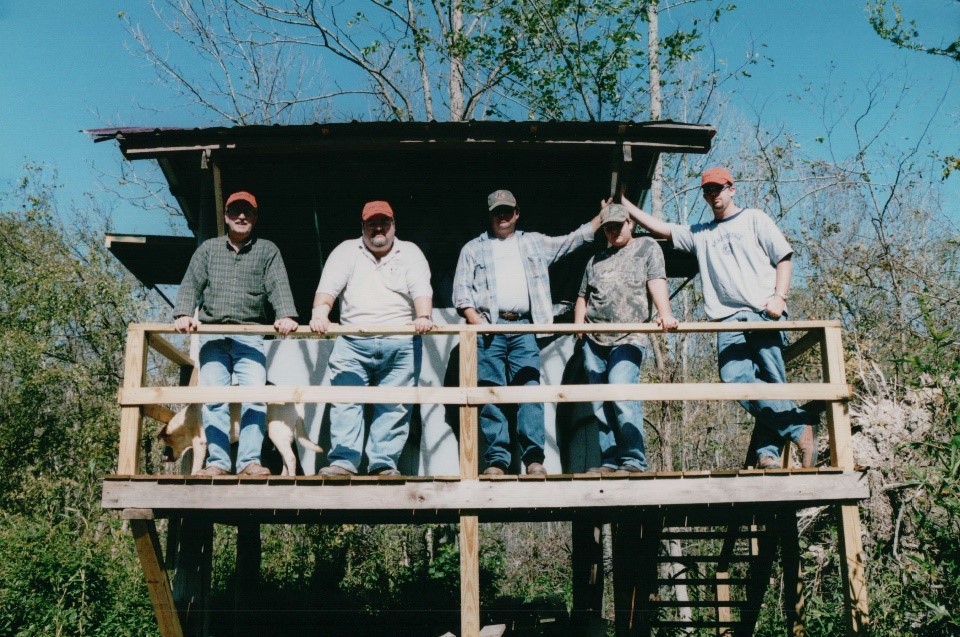