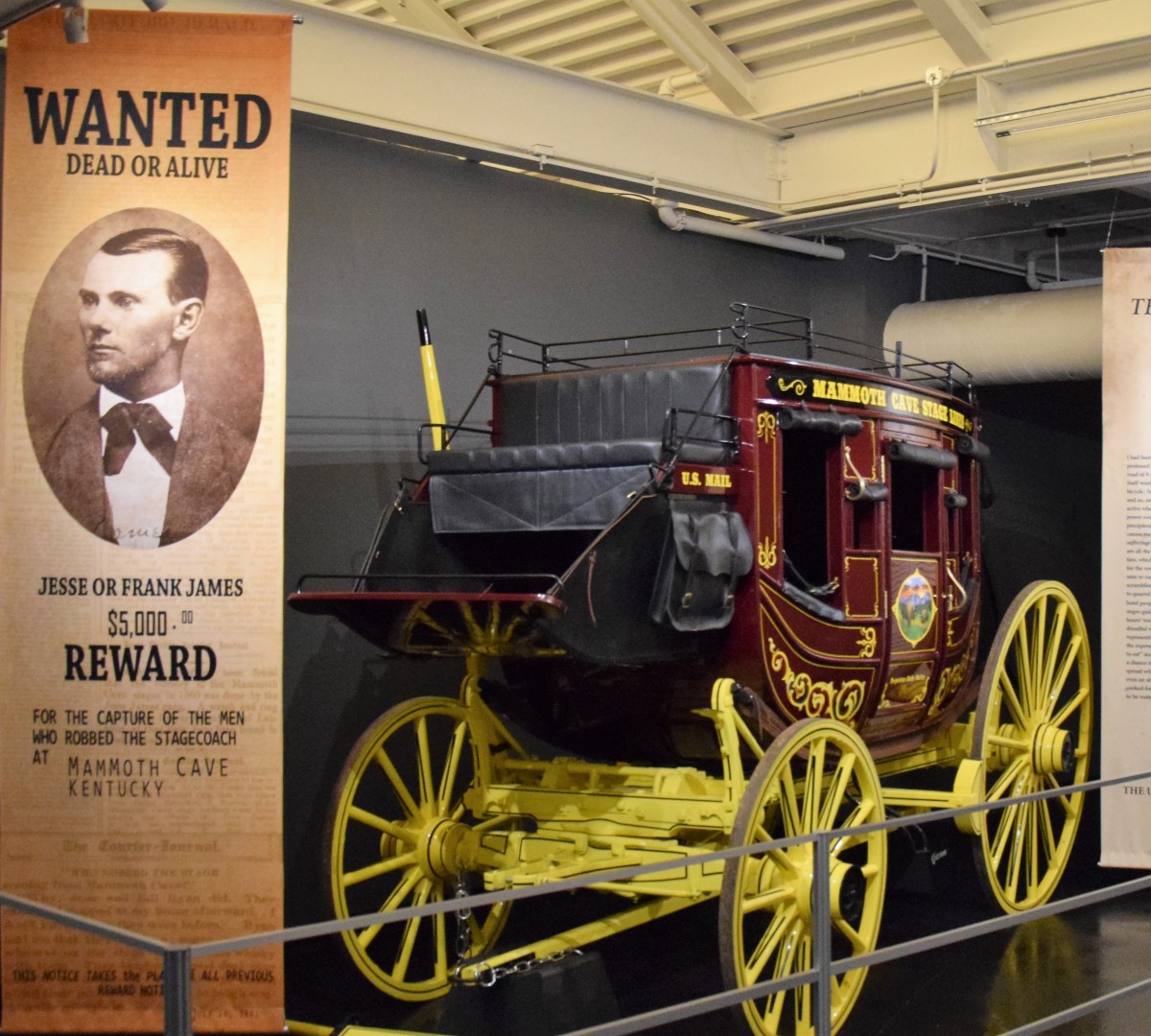 ANDREW McCOY’S restored stagecoach ferried visitors from Woodland Station near Cave City to Mammoth Cave from about 1859 to 1904.

Motoring outside of its usual role of showcasing all things Corvette, the National Corvette Museum has mounted its own transportation time-hop spanning 225 years of Kentucky history. Curator Derek Moore seized the opportunity to broaden the museum’s focus and simultaneously celebrate the 225th anniversary of Kentucky’s statehood. The exhibit, “Kentucky – 225 Years on the Move,” opened in late August and will be on display through May.

Collaborating with some of Kentucky’s highly-regarded museums, private collectors, and organizations, Moore assembled an intriguing collection of transportation-related artifacts highlighting our ever-evolving modes of transportation. Reaching back to the last years of the 18th century, Judge Harry Innes’ riding breeches remind visitors that specialized apparel for traveling was even found on the Kentucky frontier. Designed to be tight-fitting on the legs but loose on the thighs, the riding breeches allowed for freedom of movement while riding a horse.

An authentic horse-drawn sleigh brings to mind Lydia Maria Childs’ time-honored song, “Over the River and Through the Woods” about a sleigh ride to grandmother’s house on Thanksgiving Day. Mile markers, two of them originally located on roads to Bowling Green, guided travelers to Kentucky towns. The inclusion of water-borne vessels such as the steamboats of the late 19th and early 20th centuries remind viewers that not all transportation was by land as both people and goods were moved about on such water craft.

Artifacts from south central Kentucky abound in the exhibit, ranging from a specially crafted tool for burnishing the brass rails on steamboats from the Woodbury Museum to Andrew McCoy’s fabled stagecoach ferrying visitors from near Cave City to Mammoth Cave to the Bowling Green Police Department’s first motorcycle unit. A few paces away, one is reminded of the old toll booths found on the Kentucky Turnpike and the early years of the state’s interstate highways and parkways.

Recently restored by the Mammoth Cave National Park Association, the McCoy stage coach may be the one robbed by outlaw brothers Frank and Jesse James in 1880. It is said that when Jesse James died he was in possession of the gold pocket watch taken from Judge Rowntree who was a passenger on the day of the robbery. Legendary stagecoach driver Jim Hayden might not recognize the gleaming, refurbished conveyance in which he transported a parade of famous and not-so-famous visitors to the caves. McCoy owned and operated the Mammoth Cave Stagecoach line from about 1859 to 1904. Imagine the ride in the cab which rests on leather straps – a 19th century version of shock-absorbers – and is mounted on steel wheels. 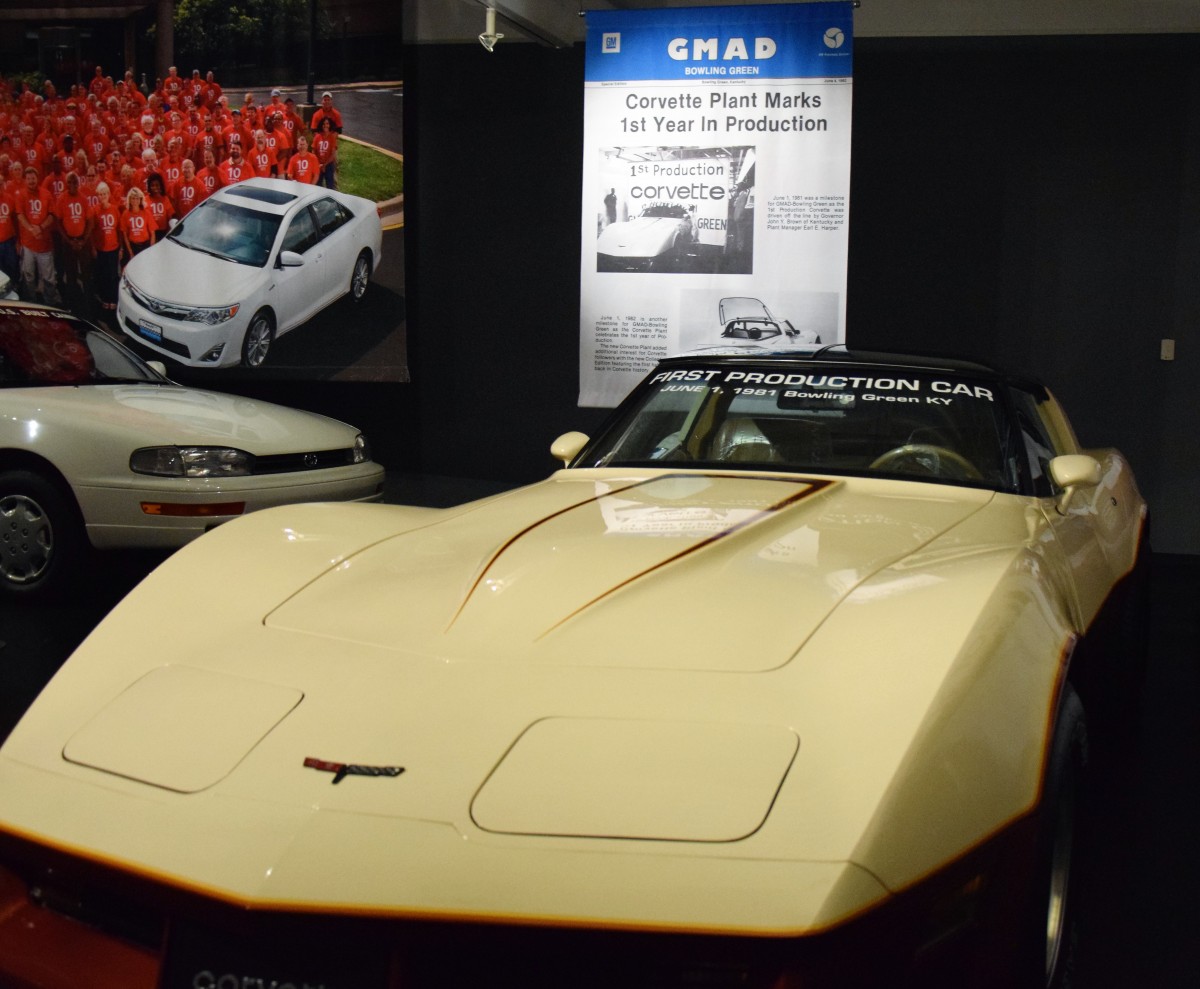 THE FIRST CORVETTE to roll off the Bowling Green Assembly Plant line in 1981 holds a place of prominence in the exhibit, “Kentucky: 225 Years on the Move.”

Perhaps the most famous local artifact is the first Corvette to roll out of the Bowling Green Assembly plant on June 1, 1981. With the plastic covers still intact over the seats and never driven, the car remains in pristine condition with its two-tone paint that was highly popular in the early 1980s.

One artifact does seem surprising – the one-millionth U.S.-built Toyota Camry – a reminder that the state’s modern transportation history has evolved into the rest of the world.

While the exhibit will remain on display through May 2018, it’s an ideal destination for the holiday season when visiting friends and relatives are looking for unique and memorable activities.

The exhibit is part of the regular self-guided tour at the National Corvette Museum which is open daily from 8 a.m. to 5 p.m. Central Time. For more information, visit www.corvettemuseum.org.