Describing herself as “a bulldog running along at the feet of Jesus, barking at what He doesn’t like,” Kentucky native Carrie Amelia Moore Nation, became a prominent figure in America’s toward prohibition of alcoholic beverages. Born in Garrard County on November 25, 1846, she had an imposing physical presence reinforced by wielding a hatchet as she went on her crusade against liquor, claiming she was on a God-inspired to destroy bars.

As a young woman, Carrie made a poor choice by marrying a Union veteran who happened to be a chronic alcoholic. The couple separated before a year had passed and Carry gave birth to a daughter; within another year, her husband had died of alcoholism. She sold some land her father had given her and used the proceeds to build a small home and cared for her mother-in-law and her baby, Charlien. She enrolled in a normal institute (a 2-year accelerated teacher’s college) where she earned a teaching certificate and began teaching school. 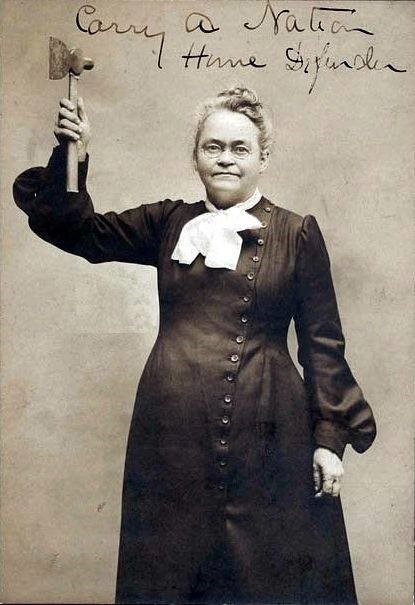 KENTUCKY-BORN CARRY A NATION posed with her hatchet in hand for photographs she sold, using the proceeds to pay her court costs and fines for smashing bars.

In 1874, Carrie married David A. Nation who changed careers frequently; he was an attorney, a minister, newspaper journalist, and farmer. David eventually settled on preaching while Carrie began managing a hotel. Noticing the negative effects of liquor in Medicine Lodge, Kansas, Carrie began her movement against alcohol. She first staged simple protests, then she began entering saloons – armed with her hand organ – to serenade customers with hymns. Upon entering bars, Carry’s signature greeting for bartenders was “Good morning, destroyer of men’s souls.”

To fortify her efforts, Carrie changed the original spelling of her name to Carry A Nation (which she even trademarked) so that it would appear as “Carry A Nation for Prohibition.” In response, saloons began using the slogan, “All Nations Welcome But Carrie.”

Carry claimed that on June 5, 1900, she received a divine vision telling her “Go to Kiowa. I’ll stand by you,” which she interpreted as “Take something in your hands, and throw at places in Kiowa and smash them.” Thus, on June 7, she carried out her instructions when she entered Dobson’s Saloon, announcing, “Men, I have come to save you from a drunkard’s fate!” She then began hurling rocks (which she called “smashers”) at the bar, destroying it. She vandalized two other Kiowa saloons and when a tornado hit Kansas, she took it as divine approval of her work.

David A. Nation commented that she should use a hatchet in her attacks on saloons to which Carry replied, “That is the most sensible thing you have said since I married you.” The couple divorced within a year of Carry beginning her prohibition activities.

Now armed with a hatchet, Carry began what she called “hatchetations” at drinking establishments and was arrested around 32 times. To pay her bail and court fines, she began giving lectures for money and conveniently sold souvenir hatchets and photographs of herself to those attending.

So resolute in her feelings about alcohol, she approved of President William McKinley’s assassination in 1901 because she suspected he was a secret drinker and noted that drinkers “got what they deserved.” After collapsing while sermonizing in Eureka Springs, Arkansas, Carry was admitted to Evergreen Place Hospital and Sanitarium where she died on June 9, 1911. She was buried in an unmarked grave until the Women’s Christian Temperance Union placed a stone at her grave proclaiming, “Faithful to the Cause of Prohibition, She Hath Done What She Could.”