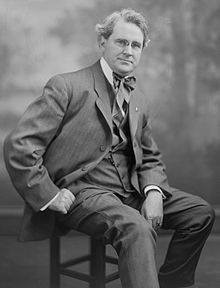 KENTUCKY NATIVE Clifford Berryman’s depiction of a bear in a political cartoon led to the creation of the “Teddy Bear.”

On November 16, 1902, Woodford County, Kentucky native Clifford Berryman’s cartoon of President Theodore Roosevelt on a Mississippi bear hunt was published and led to the creation of the Teddy Bear.

Mississippi Gov. Andrew H. Longino invited Roosevelt on the expedition but after three days of hunting, the President was the only member of the hunting party who hadn’t gotten a bear. Not wanting Roosevelt to leave disappointed, the guides tracked an old black bear with the aid of their dogs, caught it, and tied it to a tree. The President was summoned and it was suggested there was a bear by the tree he could shoot. Roosevelt bristled at the thought and declared it would be unsportsmanlike to do so. However, he noted that the old bear was suffering from the attack by the dogs and ordered that the bear be humanely put out of its misery.
Reports of Roosevelt’s actions made the news around the country and it caught the attention of newspaper political cartoonist Clifford Berryman of the Washington Post. As a result, he drew one of his most famous cartoons entitled “Drawing the line in Mississippi,” illustrating the bear hunt tale. 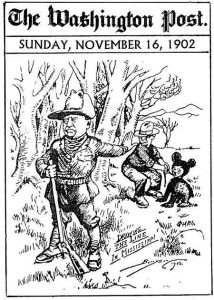 Published on this date, two days after the November 14 incident, Berryman’s cartoon features Roosevelt in the foreground and the bear by a tree in the background. In the original illustration, the bear and the guide are similar sizes but in subsequent versions of the cartoon, Berryman made the bear a cub. For the rest of Roosevelt’s administration, Berryman included a bear in cartoons about the President, creating a cultural icon.

Morris Michtom, a candy shop owner in Brooklyn, New York took note of Berryman’s cartoon and had an idea. He and his wife designed a stuffed toy bear and displayed two of them in their shop window. Michtom asked permission from President Roosevelt to call the bears “Teddy’s bears.” The public response led to mass production of Teddy Bears and the creation of the Ideal Novelty & Toy Company. Near the same time, Margaret Steiff in Germany earned a living making stuffed toy elephants and other animals. In 1903, Steiff received an order from an American requesting a quantity of stuffed toy bears. Their popularity led to the German company being known around the world for their Teddy Bears. 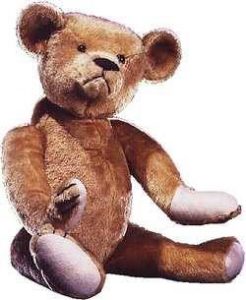 AN ORIGINAL version of Michtom’s Teddy Bear is in the collection of the Smithsonian Institution.

Clifford Berryman was a native of Clifton in Woodford County. He worked for the Washington Post from 1891 to 1907, and from 1907 to 1949 for the Washington Star. He was awarded a Pulitzer Prize for his political cartoons. Among his favorite subjects to lampoon were Theodore Roosevelt, Franklin D. Roosevelt, and Harry S. Truman.  President Truman once told Berryman, “You are ageless and timeless. Presidents, Senators and even Supreme Court Justices come and go, but the Monument and Berryman stand.”

My Kentucky appears weekly in Jobe Publishing newspapers in celebration of the 225th anniversary of Kentucky statehood.  Past columns can be accessed at www.jpinews.com