How old were you when you first drove a car? What was the first car you got behind the wheel of? For me it was a 1960 Cadillac and I was eleven years old. I remember quite vividly that my older brother, Steve, was allowed to drive at eleven, so I couldn’t wait until it was my turn. Over the next five years I reminded my Dad over and over again that he let Steve start driving when he was eleven, so it was only fair that I should start driving at that age as well. Now although my Dad did seem a bit irresponsible at times, he didn’t let us drive out on the highway at eleven, we were only allowed to drive on the gravel road, Kirby Grove Road (later renamed Old Moore Schoolhouse Road), that led to Papa and Grandma’s farm.

I think it was just a couple days following my eleventh birthday, we went down to the farm and I distinctly remember reminding Daddy that I was now officially eleven years old. He gave me that “look” and I knew that reminding him again would be detrimental to my quest, if not my overall well-being. When it came time to leave the farm, I could hardly control my excitement, but I did my best not to let on. I walked toward the passenger side of the car, but Daddy cut me off and told me to get behind the wheel. I squealed like a girl, ran to the driver’s door, opened it and plopped into the driver’s seat.
True to my truck-driver Daddy’s training, everything in the “cockpit” had to be adjusted properly. The electric seat made that much easier, I had to move it forward so I could reach the pedals and raise it so I could see over the steering wheel. Because truck drivers need a wide field of vision, Daddy also made sure I adjusted the mirrors before I pulled out. I always thought it was ironic that Daddy taught us how to drive like a truck driver, the whole time saying “you’re not gonna grow up to be a truck driver, you’re gonna make something of yourself.”

It was also ironic that he was never prouder of me than when, at age 36, I became a truck driver and was soon made a Training Engineer because I operated a truck like a veteran. I also drove the car just like my Daddy, with a lead foot. When we reached the end of the gravel road on that first driving experience, Daddy had me pull over and told me I handled the car just fine, but just like him, I drove like a “bat out of hell.” Over time I was allowed to drive on the blacktop, specifically the Tobacco Road and the Roseville Road, but only as far as the city limits. It would be another five years before I was legal to drive. 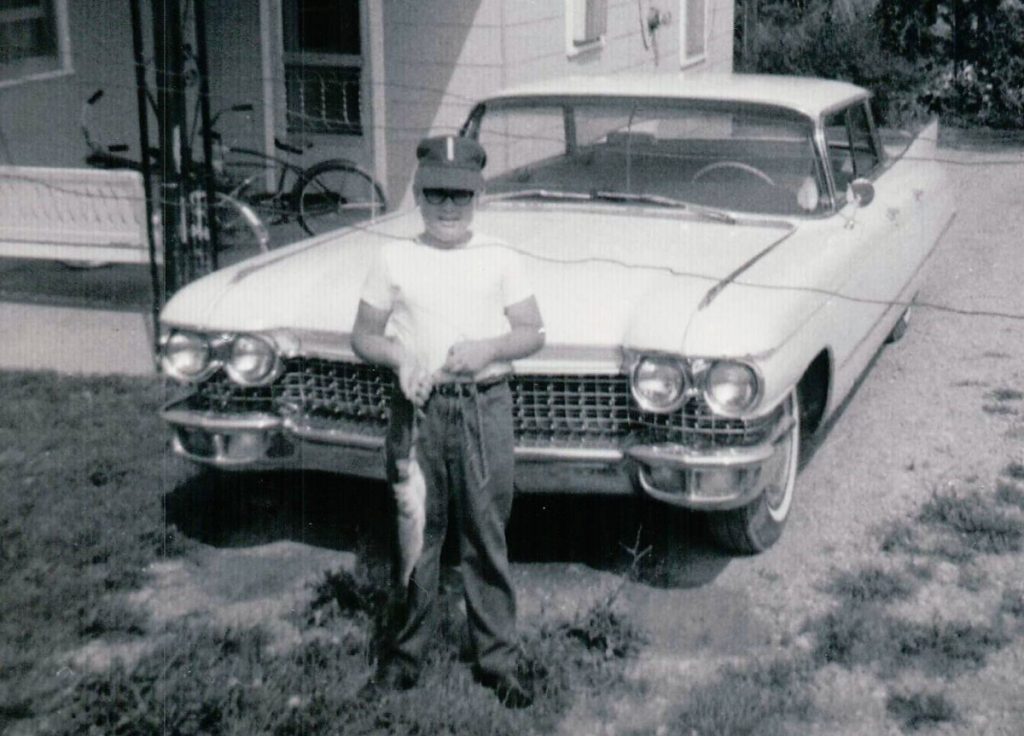 In the photo, I am standing in front of the ’60 Caddy holding a bass I caught in one of the lakes at Gorin Park in Glasgow.

This ’60 Caddy was a major player in one of Daddy and cousin Wayne Elmore’s excursions. It was soon after the Barren River Lake had been completed and a lot of formerly accessible property was now under water. There was one particular “squirrel” woods that Daddy and Wayne wanted to hunt in, but the old road leading to it was under water. Of course, they wouldn’t let that small fact deter them. When we got to the water’s edge it was still full dark so Wayne grabbed a flashlight and sat on the hood of the car. By shining the light into the water, he could see the reflective paint from the centerline on the submerged road. I’m gonna guess we traversed water that was 2-3 feet deep as Wayne directed Daddy for approximately 200 yards. Water started seeping in around the doors and I remember having to pick my feet up as the floor boards filled with water, but it would all be worth it because that woods was so inaccessible no one had hunted in it and it was surely loaded with squirrels. We made it to the other side, loaded our guns and entered the woods for an exciting day of hunting. Unfortunately, as with many of Daddy’s adventures, it was a bust, we saw no squirrels and not even any signs of squirrels. I guess the squirrels must have gotten the memo about the lake and moved to another location before they were isolated.

I loved that old Cadillac, it was built like a tank (as heavy as one too), but rode and handled like a dream. It was luxurious, having all the most modern accessories of its time, including an automatic headlight dimmer when you approached oncoming traffic. It came from a time when American built meant the best of manufactured products.