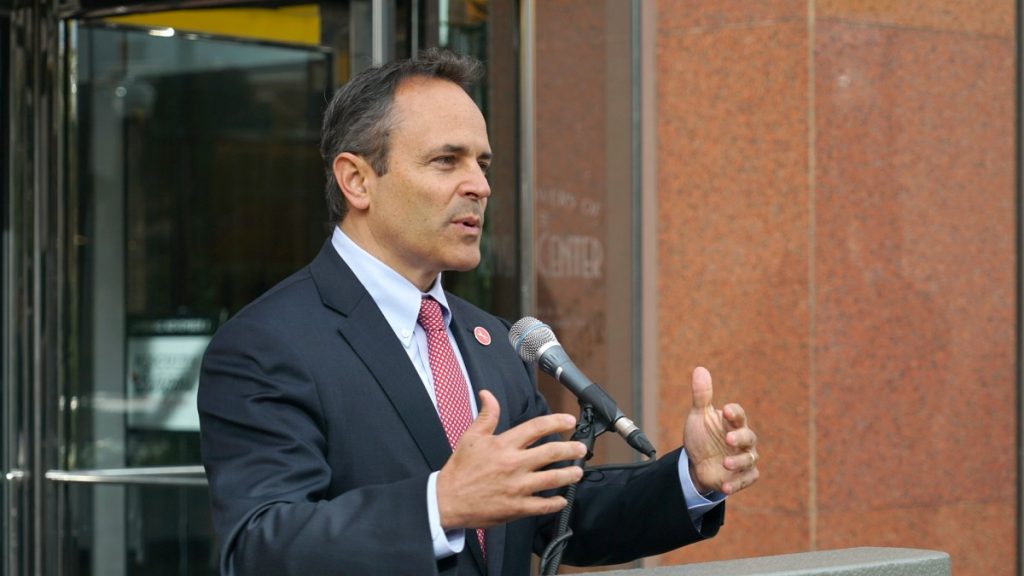 Entire interview where Governor Matt Bevin is being accused of saying,”teachers are hoarding sick days”,    Governor Bevin did not say this and the $1,000 offer for evidence he did is still unclaimed.

Gov. Matt Bevin says opponents of his pension overhaul plan are “sowers of dissent, discord, and division on purpose because it serves their own purpose.”  Kentucky’s chief executive spent nearly an hour in an exclusive interview with Jobe Publishing last week discussing the Commonwealth’s pension crisis, opponents of his proposed plan, the challenges of economic development, the state’s financial stability, and how his message is frequently twisted by his opponents and the media.

Since announcing his proposed plan for pension reform, numerous groups have anxiously expressed concern, if not complete opposition to, Bevin’s plan that weighs in at around 500 pages.  Many have decried the details of the document, complaining they were excluded from discussions that affect state workers, particularly current and retired teachers.

“There has never been a governor in the history of Kentucky – certainly in our lifetimes – that has met with these groups on multiple occasions, face to face, ever – on any issue – ever.  I’ve done it and members of my administration have done it, legislators have done it; we’ve been doing this all summer and fall,” Bevin said in response to complaints that only Republican leaders were involved in the process.

Bevin said the bill has had ample input. “It was formed entirely from these thousands of hours of input from every group you can think of in Kentucky – every group – multiple, personal, face-to-face meetings, some of them for hours.”

Some of the greatest criticisms have come from educators and various groups of educators such as the state’s school superintendents, retired teachers, and the Kentucky Education Association (KEA).

“I’ve personally had meetings for hours with the KEA and they will come out and lie and say they had no input. It’s a 100-percent lie,” Bevin said.

“You get guys like Tom Shelton [Executive Director of the Kentucky Association of School Superintendents] with whom we had 5-plus meetings and he never had a single idea or a single plan except ‘don’t take away our system – we want to leave it as it is.’  And now, he has the audacity to come out and tell superintendents they should shut down their schools because they haven’t been heard.  The guy has had multiple inputs,” Bevin said.

“These people are liars.  They are sowers of dissent, discord, and division on purpose because it serves their own purpose.”  Bevin insisted that the bill is the culmination of “thousands of hours of conversation with every group that could possibly be affected.”

The urgency of pension reform

Bevin contends that decades of “self-serving, ‘what’s in it for me’ policy’” have created the financial quagmire currently facing Kentucky.  “I’ve got all of these things holding me back.  I want to open the throttle and go wide open.  It’s been a real challenge but we’re doing it.  We’re doing it not because it’s fun, or it’s easy, but because it’s essential,” Bevin said.

It is Bevin’s belief that Kentucky government must demonstrate that it is serious about pulling out of its financial problems.  “We’ve got to prove that we’re business-minded.  We can’t perpetuate this faulty system.  It’s not the $64,000 question, it’s the $64 billion question.”

“If our financial house isn’t in order, then we won’t attract or keep the folks we want nor will we keep them nor will we expand.  We cannot be one of the worst credit-rated states in America and expect business to come here.  Nobody’s going to come here when they can see the cliff coming,” Bevin said.

“It’s like saving a drowning victim,” Bevin said.  “The person will fight you, they will bite you, they will claw your eyes out, they will pull your ears, and they will try to drag you under.  But you know that they still need to be saved and once you get them to shore they will be grateful that their life is saved.”

Likening a drowning victim to Kentuckians who oppose his plan, Bevin said, “people react out of fear and panic in ways that are not rational.  To fight to keep a system that you know is dying and running out of money does not make sense.  But people do it out of fear and a lack of understanding.” He added that some opponents are led by “those who prey on those things for personal gain” while “others fall victim to it because they don’t know different.”

Lack of understanding leads to opposition

While speaking about the pension overhaul plan in recent weeks, Bevin’s words created a firestorm of controversy. “A perfect example is this quote about sophistication – I’m sure you’ve heard about it.  Did you actually read what I said?” Bevin asked, regarding news reports stating that those opposing his plan lacked the sophistication to understand it.

Bevin contends he was not singling out educators in his remarks.  “I didn’t say it specifically about any retiree or group, let alone teachers.  In fact, it says those that are opposed to the plan I said are unsophisticated.  Also, not true.  Never used that word at all.”

“What I said is this affects all Kentucky and it is those that are most affected who don’t have the sophistication to appreciate the danger they are in.  If those of us who do understand it don’t step up and save the system on their behalf, then shame on us,” Bevin said.

“The actual quote is speaking about Kentucky.  It is entirely true.  Your average person in Kentucky – 90-percent of taxpayers are going to pay for this; less than 10-percent of the people are getting a pension from the state.  That is who is in trouble,” Bevin said.

“They do not get it.  They do not understand it.  They don’t know it.  They hope someone will fix it. Nobody has ever had the cajoles to step up and do anything because they were afraid politically.  That’s what has to end,” Bevin said.

Regarding the backlash over the “sophistication” comment, Bevin said,

“People will take a comment that is absolutely true and that they know to be true and allow it to be spun into something that it’s not to whip up discontent.”

“I wish you’d publish on the front page of your newspaper that I will pay $1,000 in cash, in person with photo opportunities along with it, in front of live television if they are so inclined, to any person that can ever find any evidence – audio, video, or otherwise – that I have ever said that teachers hoard sick days.  I’ve never said it,” Bevin declared.

“These are the kind of things that make this job ridiculous,” Bevin said of serving as Kentucky’s governor.

“This is why nothing gets done.  Most people don’t have the intestinal fortitude to withstand that kind of crap and still keep doing the right thing,” Bevin said.

“Luckily, I’m wired that way. I’m trying to make it so people don’t bail on Kentucky.”

See next week’s editons of Jobe Publishing newspapers for the second part of our exclusive interview with Gov. Matt Bevin.