While visiting Barren County last week, Kentucky Commissioner of Agriculture Ryan Quarles highlighted the work he is directing toward expanding and sustaining agriculture in the Bluegrass State. One of his top priorities is promoting Kentucky products internationally with a particular interest in China. “The Kentucky Department of Agriculture is putting a lot of emphasis on international trade. The rest of the world needs Kentucky agriculture.,” Quarles said. With the United States’ withdrawal from the Trans-Pacific Partnership trade agreement, the ability to export Kentucky commodities has become a prime goal. 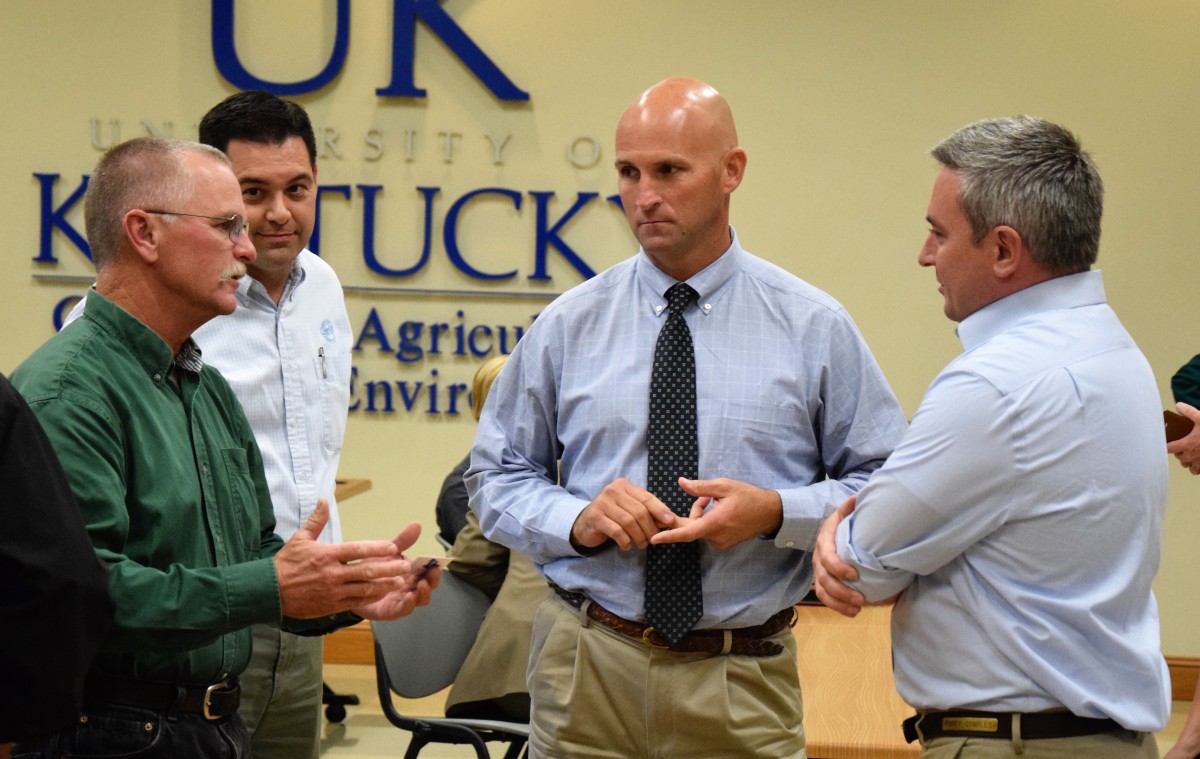 About 35 local farmers, agri-businesspersons, and government officials attended the forum to hear Quarles’ ideas as well as share concerns of their own. Dairy and poultry farmer Richard Mattingly told Quarles that international trade has a big impact on Kentucky farmers as evidenced by the increase in milk prices. “My dad has been a dairy farmer for 50 years and the best year of his entire career was three years ago. Prices are down about 40-percent since then,” Mattingly said. “Milk prices are tremendously depressed from what they were a few years ago,” Mattingly said, encouraging Quarles to continue his work.

Quarles explained that he is working on an expansion and overhaul of the successful Kentucky Proud program that markets Kentucky products. One current project in the works is Beef Solutions, a plan that includes Kentucky beef cattle to be processed at The Chop Shop in eastern Kentucky, then distributed by wholesaler Creation Gardens to 88 Kroger food stores in the state.

“Kentucky is the Number One beef cattle state east of the Mississippi River,” Quarles reminded. “My goal is to get more Kentucky beef into Kentucky grocery stores. This is an opportunity for Kentucky Proud to be sold in Kroger stores,” adding that he believes Kentucky consumers will purchase Kentucky-raised beef if they know it comes from Kentucky.

Quarles said the packaging equipment is now in place for the program and he hopes to have the first Kentucky beef in Kroger stores by Christmas. Plans call for the program to eventually expand into other cuts of beef. “If this works it will encourage other processors to open in this area,” noting that Kentucky currently lacks processing centers.
Quarles has his sights set on expanding beef exports as well with China as a prime target. “China wants products to be source-verified. We can do that,” he said. Currently only about 4-percent of Kentucky ag products go to China.

The Commissioner lauded the Kentucky Proud marketing program that he said has a 77-percent recognition factor among Kentucky consumers. He sees the program not as only marketing, but educational as well. “America doesn’t know where their food comes from,” Quarles said. He cited instances in which people think chocolate milk comes from brown cows, hamburger comes from ham, and can’t differentiate a soybean from a green bean.
Barren County farmer Ken Wininger expressed his concerns about protecting Agricultural District overlays in zoning ordinances. “If they ever left that, our farms are gone,” Wininger explained. His property adjoins the new Veterans Outer Loop around Glasgow and is within the agriculture overlay.

Micheal Hale, Barren County’s Judge / Executive, told Qualres of the difficulties of maintaining older rural roads in the county. “These older secondary rural roads were not built for modern farming equipment. It’s not the farmer’s fault – they have to move their product,” Hale said. He said funds generated by the gas tax for the road fund simply are not enough to keep pace with deteriorating roads primarily used by farmers.
An additional issue Quarles mentioned is that Kentucky has seen the largest transfer of land in the past 20 years since the Homestead Act. He said farm families tend to pass land from generation to generation, making it difficult for young farmers to acquire land on which to operate a farm.