During the autumn of 1824 it seemed a dark cloud hovered over Kentucky’s seat of government. Joseph Desha was inaugurated as the Commonwealth’s eighth governor, setting in motion one of the most chaotic administrations in history. Just two months into Desha’s term, the statehouse burned to the ground on November 4. Rather than focusing on building a new Capitol, political leaders found themselves stymied by Desha’s actions. Among the various crises was 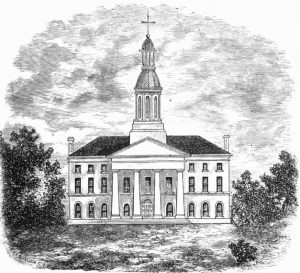 KENTUCKY’S SECOND STATEHOUSE in Frankfort which burned on November 4, 1824.

Desha’s attempt to abolish the Court of Appeals and create a new court after they blocked his debtor-relief plan, the governor’s political rivals being elected to the legislature, a dramatic feud with Transylvania University President Horace Holley, an escalated rivalry with Henry Clay, and pardoning his son who was twice convicted of murder. Thus, the legislature didn’t get around to voting to build a new Capitol until January 1827.

Twenty-five-year old Gideon Shryock’s design for a new statehouse was selected on March 12, 1827 earning a $150 prize. Shryock wrote that his design was patterned after the Ionic temple of Minerva Polias at the Priene, Ionia (now Güllübahçe, Turkey). Faced with polished Kentucky River marble quarried near Frankfort, the façade features six Ionic columns measuring four feet in diameter and standing 33 feet tall. Construction took three years and $85,000 to complete. The building was the center of Kentucky government until 1910; today it is known as the Old State Capitol. 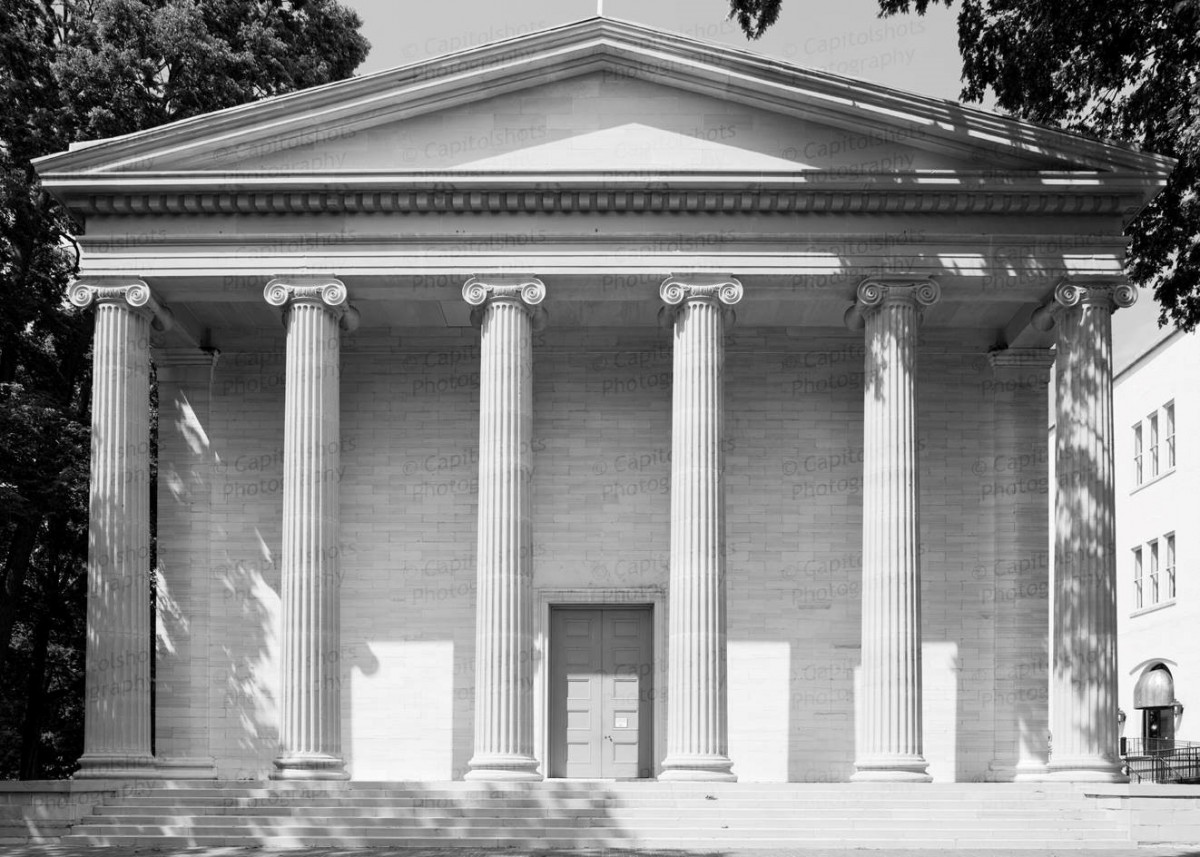 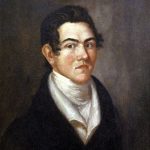 Born November 15, 1802, Shryock quickly emerged as Kentucky’s premier architect thanks to the new Capitol. The son of Mathias Shryock, an untrained practical builder in Lexington, Gideon attended J.P. Aldridge’s Lancastrian Academy (333 S. Upper Street, later known as Lafayette Academy) in Lexington. At age 21, he moved to Philadelphia where he studied architecture under William Strickland, the architect of the Tennessee State Capitol and one of the founders of the Greek Revival style of architecture in the United States. 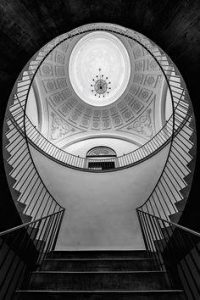 SHRYOCK’S famous self-supporting staircase in the rotunda of the Old State Capitol.

Taking note of the young architect, Senator Henry Clay secured Shryock’s services to design a new building for Transylvania University in 1831. Completed in 1834, that building is now known as Old Morrison Hall and remains in use.

In 1833, former Kentucky Senator John Pope was serving as Territorial Governor of Arkansas and recruited Shryock to design a Capitol that “would command the admiration and respect of the passing stranger, and have moral and political influence on the whole community.” Today, the Arkansas Statehouse is considered one of the premier examples of Greek Revival architecture west of the Mississippi River.

Gideon Shryock’s younger brother, Cincinnatus Shryock, studied at Transylvania University in anticipation of becoming a physician. Instead, he chose to become an architect with guidance from his older brother. While Gideon became noted for his grand-scale designs, Cincinnatus focused on residential architecture and churches primarily in Lexington. Cincinnatus’s designs include First Presbyterian Church in Lexington. 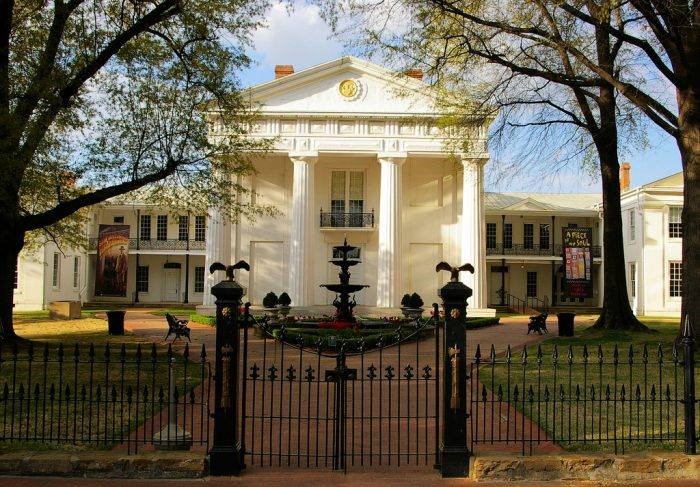 THE ARKANSAS STATE CAPITOL designed by Shryock is considered the finest example of Greek Revival architecture west of the Mississippi River.