However, while he was a student in the School of Dentistry at the University of Louisville, Riley began to consider the places he’d lived and places he and his wife, Jen, might settle to begin their careers. “I began to realize that Glasgow’s not a bad place to live. In fact, it’s a great place to live,” Riley recalled. By the time of my junior year in dental school, I decided I wanted to come home and my wife Jen, who’s from Owensboro, was onboard with the idea.” The following spring Matthew graduated from dental school on May 14 and the following day moved back to Glasgow. 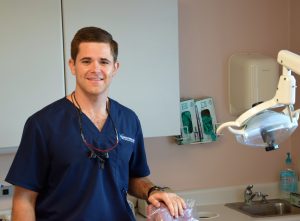 What would attract a young professional like Riley to return to Barren County? “I think anyone would find Glasgow is a genuine community. You kinda have to break through the shell and get yourself out there and meet people. When you do, you’ll find it’s a place filled with people who will give you the shirt off their back,” Riley said.

“Even though we [Glasgow and Barren County] haven’t really grown significantly in population, we’re seeing growth as far as catching up with mainstream ideas you find in big cities as far as things to do. Glasgow’s a place that if you get out and get involved, you’re going to find some of the greatest and most generous people anywhere,” Riley explained.

Asked about his vision for Glasgow and Barren County’s future, Riley said “I’d like to see us appeal to a younger generation. I think one thing you’ll find in communities across the United States is that young people from communities like Glasgow are moving to places like Bowling Green or Nashville. We have two school systems here that are some of the best in the state and they do a fantastic job producing graduates. The problem is that many of those kids aren’t coming back here.”

“I think a lot has to do with making Glasgow appealing and showing what the community can do for someone like me. If we can appeal to just a little bit younger crowd – and maybe that means a couple of young people are on the city council and groups like the Young Professionals help us network – the idea of coming home will take hold. As you see those things happen, we could see a change and have more young people transitioning back to Glasgow and Barren County.” Riley said.

Now settled in Glasgow where he practices dentistry with Drs. James Thurman and Amy Norris Cassady, Riley says he’s found his niche in the community. “My biggest reward is helping or treating someone that made an impact in my life – no matter how small or how much influence they had – being able to treat those that I know and those I’m getting to know. That’s one of the things about Glasgow – it’s an appreciative town and that makes it unique and different compared to big cities,” Riley said. So far, patients have included former teachers and even his daycare provider from years past. “You don’t find that in a big city.” 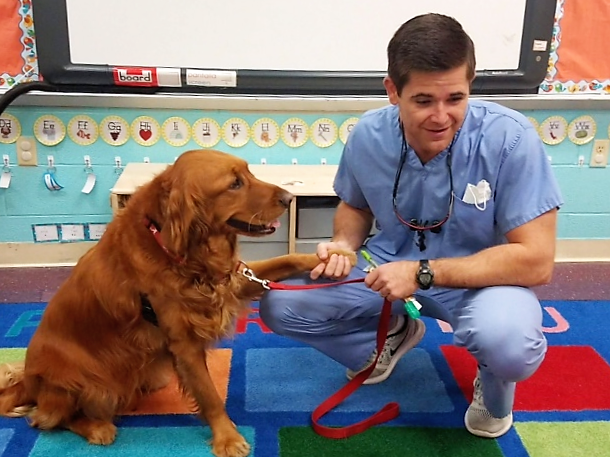 DR. MATTHEW RILEY with his dog Bennett during a recent program he presented at Caverna Elementary School. Riley demonstrated good dental habits such as thorough brushing using Bennett as his sidekick.

In addition to his practice, Riley was recently named Dental Director of the Barren River Health Department which serves a 9-county region in southern Kentucky. The appointed position is volunteer work but Riley’s vision for the job is passionate. He utilizes the district’s mobile dental van to visit schools giving free dental services and helping kids understand the importance of good dental hygiene. Recently, he visited Caverna Elementary School in Cave City and took along his canine sidekick, Bennett, who patiently allowed Riley to demonstrate good brushing techniques.

Another of Riley’s passions is helping those in need. He’s organizing a program called “Smile, Barren County” through which a group of area dentists volunteer a day of free treatment to those who cannot afford dental care.

Matthew’s wife, Jen Riley, has acclimated to Barren County living and teaches at Eastern Elementary School. The couple is eagerly expecting the birth of a baby boy in a few months. “We’re ecstatic,” Matthew says about the opportunity to begin their family and  another generation of Barren County residents.

This is the second in our series, “Forty Under Forty,” highlighting 40 Barren County residents, all under the age of 40, who are bringing vitality and vision to their careers, professions, and local community.

Learn more about Dr. Matthew Riley and his journey back to his home community of Barren County on Friday, November 3 with Kelly McKay on NASH Icon 103.7.