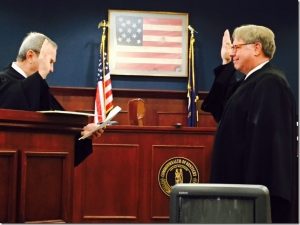 On April 27, Nance issued General Order 17-01 in which he declared that “under no circumstance” would the adoption of a child by a homosexual be in the child’s best interest. He acknowledged in his order that the declaration might constitute a “personal bias or prejudice” against homosexuals seeking to adopt children. Nance asked that attorneys filing motions for adoptions notify the court staff in cases involving homosexual parties so he could recuse and disqualify himself from the case.

The Judicial Conduct Commission gave notice of charges against Nance on September 11. In a notice of formal proceedings against Nance, Commission Chairman Stephen D. Wolnitzek stated that Nance’s actions constituted misconduct in office and violated certain portions of the Canons of the Code of Judicial Conduct. Those canons include:
• Canon 1 which requires judges to maintain high standards of conduct and uphold the integrity and independence of the judiciary.
• Canon 2A which requires judges to respect and comply with the law and act at all times in a manner that promotes public confidence in the integrity and impartiality of the judiciary.
• Canon 3B(1) which requires a judge to hear and decide matters assigned to the judge except those in which disqualification is required.
• Canon 3B(2) which requires a judge to be faithful to the law; and,

• Canon 3B(5) which prohibits a judge from manifesting, by words or conduct, a bias or prejudice based upon race, sex, religion, national origin, disability, age, sexual orientation or socioeconomic status.

The second count against Nance was also for misconduct in office by enacting a Local Rule for Barren and Metcalfe Family Courts without approval from the Chief Justice of the Kentucky Supreme Court as required. The Commission maintained that Canon 1 and Canon 2A were violated.

According to Wolnitzek’s formal notice, the Commission was prepared for a hearing on the matter and requested that Nance file an answer to the charges within 15 days. Nance requested an extension of time which was granted through October 26.

Nance submitted his resignation to Gov. Bevin on October 25. His attorney, Bryan H. Beauman submitted Nance’s answer to the charges the same day, requesting that the matter be dismissed by the Commission.