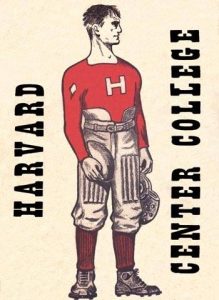 While it may be a treasured tale from 96 years ago, “C6H0” remains emblazoned on surfaces on the campus of Centre College in Danville, Kentucky. It was on October 29, 1921 that Centre defeated Harvard in what the New York Times called “arguably the upset of the century in college football.”

On that fateful date in 1921, Harvard hadn’t lost a game since 1916 (excepting World War I-era matches considered unofficial) and as a crowd of 40,000 watched, The Praying Colonels from Kentucky out-rush, out-pass, and out-maneuver Harvard’s squad. The Harvard Crimson headline read, “Raging Kentuckians Humble University Team by 6 to 0 Before Packed Stadium Crowd.”

At the time, Harvard, Princeton, and Yale were America’s football powerhouses when “Chief” Robert Myers returned to his Kentucky alma mater from Texas where he’d been coaching and brought with him some of his Texas players, one of whom was Bo McMillin. Myers recruited Major League Baseball player Charley Moran (who would later live in Horse Cave, Kentucky and for whom KY Highway 218 is named) to coach the Danville team in his mission to make Centre the best football squad in Kentucky, then the South, and finally the nation. 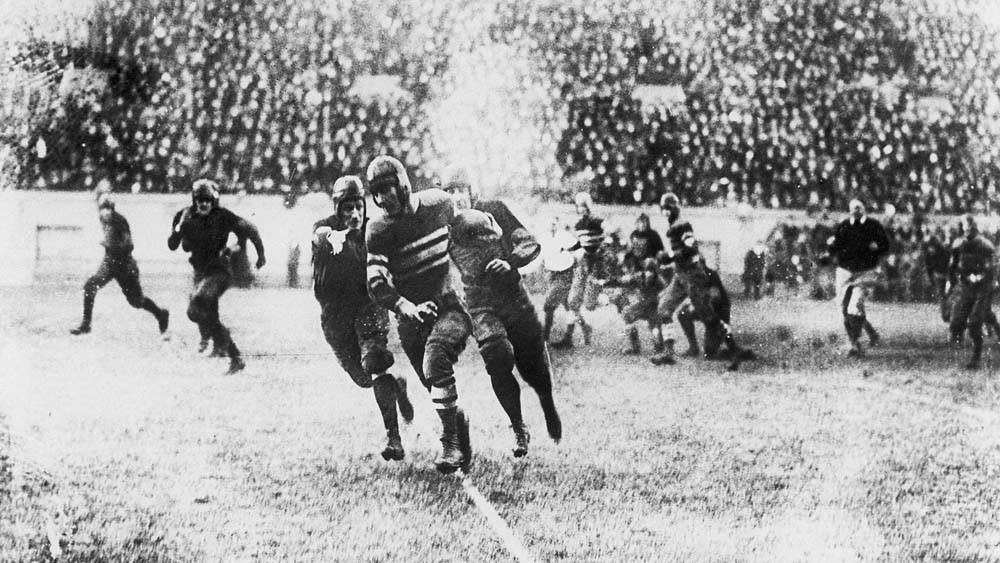 BO MCMILLIN on his way to making a touchdown for Centre in the October 29, 1921 football game in which the Kentucky college defeated Harvard.

At halftime in the Harvard-Centre matchup, both teams were tied 0-0. In the second half, McMillin scored a touchdown to ultimately win the game. Kentucky Governor Edwin Morrow quipped, “I’d rather be Bo McMillin at this moment than the governor of Kentucky,” as McMillin became an instant athletic hero.

Ecstatic Kentuckians painted C6H0 – Centre 6, Harvard 0 – on everything including the front of the college’s administration building, every Danville store window, and even private homes. In 1950, the Associated Press declared C6H0 the greatest sports upset of the first half of the 20th century. In 2006, ESPN named the 1921 game the third biggest upset in 138 years of college football. On the 75th anniversary of the victory, Centre challenged Harvard to a rematch; Harvard declined.

Sam Terry’s My Kentucky column is published weekly in Jobe Publishing newspapers in celebration of Kentucky’s 225th anniversary of statehood.  All of the columns are available at www.jpinews.com. 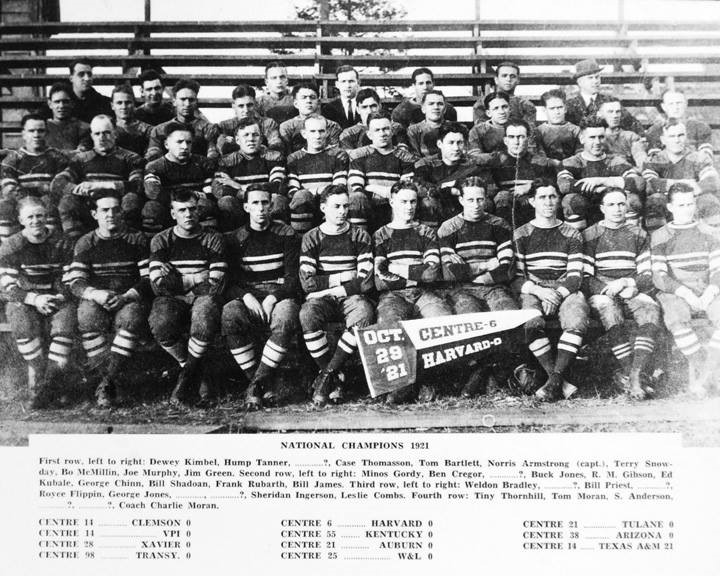 THE 1921 CENTRE FOOTBALL TEAM with a commemorative pennant noting their upset victory over Harvard on October 29, 1921.