Ever wonder who was the first to think throwing horseshoes at a stake in the ground would make a challenging sport? I decided to do a little research. One popular theory is that it came from the ancient game of quoits, in which a circular disc is used. It is believed the origin of quoits goes back to Ancient Greece and that the Greeks used a heavy disk which was thrown to see who could throw it the farthest. For those who could not afford the official discus, one could be fashioned by bending horseshoes into the round shape.

It is not hard to imagine Roman soldiers seeing this sport, participating in it and spreading it throughout Europe, including England. This game of strength and distance was modified over centuries into a game of accuracy becoming what the Europeans called quoits. They used a ring of iron, attempting to toss it onto a wooden or metal stake. This is where using horseshoes in their natural, open ended form became popularized so as to enhance the ability to make a ringer on the stake. I thought it was also interesting that the game of quoits became so popular in England, that Edward III and Richard II prohibited the game to encourage archery, probably because they felt archery was a more civilized sport. However, their efforts were in vain as the game of quoits continued to thrive, even arriving in the New World with the European immigrants.

For as long as I can remember, pitching horseshoes was a favorite pastime that has been enjoyed by our family for many generations. It seems whenever there was a gathering, someone always brought a set of horseshoes and often the games lasted all day, as there were challenges made and braggadocio that had to be “backed up.” The pitching “tournaments” were very serious business to the adult participants and the children just had to wait their turn. The games were generally played by teams in pairs and the winners kept playing until they were “dethroned” or they had taken on and beaten “all comers.” After all, bragging rights were at stake.

Some of the most serious pitchers were my Uncle Paul Elmore and his sons, Wayne and Barry. They each had “smooth as silk” swings and seemingly had perfected their own style. My brother, Steve, told me Wayne used that same smooth, “low to the ground” technique when pitching softball. My research revealed there are correct ways of holding the shoe for the 1 ¼ turn technique and the 1 ¾ turn technique, which are the two most common forms used by the most serious players, who pitch in sanctioned tournaments. 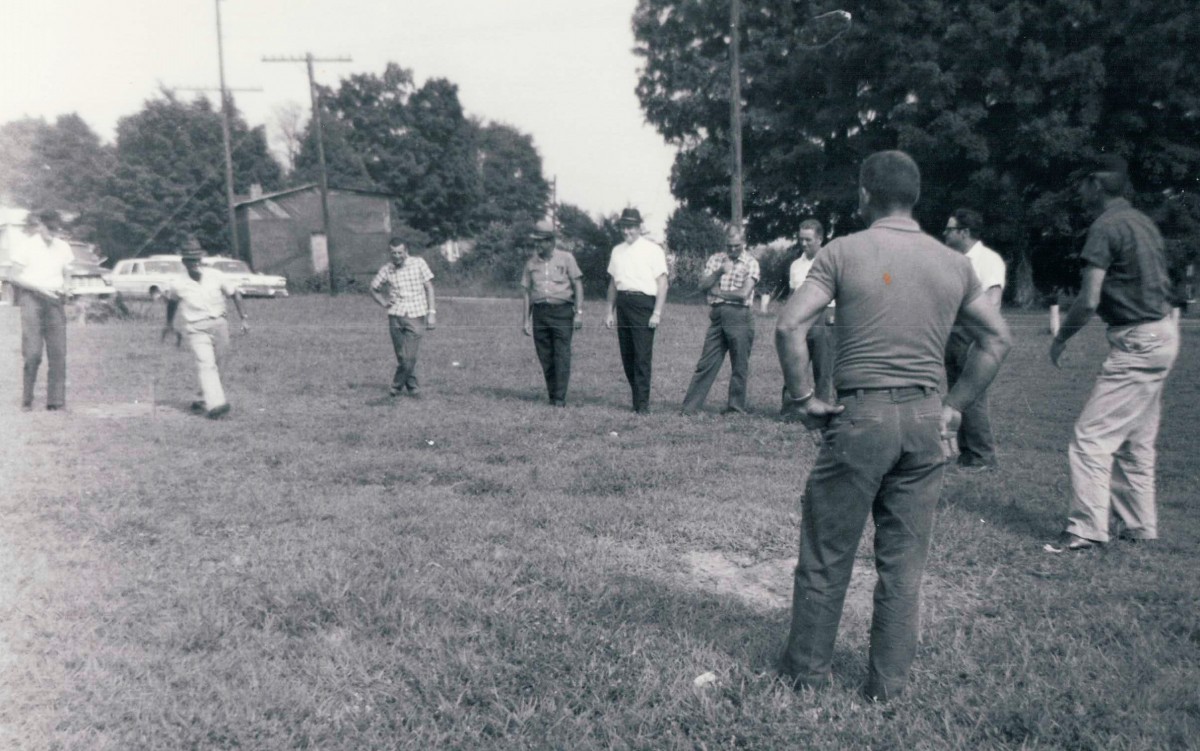 UNCLE PAUL ELMORE pitching a horseshoe at a Wheeler reunion at Dry Pork Park, sometime in the 60’s. Photo courtesy of Joyce Buster.

What I can say is that Uncle Paul, Wayne and even the youngest of the Elmore bunch, Barry, always told me I was doing it all wrong and tried to show me the correct hold, but it never “took.” I used an unorthodox hold, right at the bottom of the “U” of the horseshoe, primarily holding it between my thumb and forefinger, giving it a flip as I turned it loose. If I timed it correctly, which I seldom did, the horseshoe would do one backflip in flight and land at the base of the “stob” with the open end of the shoe slipping around it with a resounding and satisfying clang. More likely than not, my shoe would land wrong and go tumbling out of control seeking someone’s ankle to “bite.”

It is a game of finesse and technique, neither of which I seemed to master. If you held onto the shoe too long, there was too much arc in the trajectory and less stability in the throw. If you released too soon, the flight of the shoe was too flat and even if the shoe hit the stake, it most likely bounced off. A person just had to practice long enough to learn where the “sweet spot” was. Mastering the proper backswing, stepping forward with the leg opposite of your pitching arm, utilizing a fluid forward motion of the arm with a follow through upon releasing the shoe from your grasp, are essential to accuracy and consistency.

A ringer scored 3 points, a leaner scored 2 points and if there were no ringers or leaners, the shoe closest to the pin scored 1 point, but it had to be within one shoe width of the pin. If you threw a ringer on top of an opponent’s ringer (capped it), you wiped out their points, while scoring no points for your ringer, you had the satisfaction of negating your opponent’s ringer. If I remember correctly, our games went to 21 and had to be won by 3 points.

Just as horseshoes evolved from quoits, the games of yard darts and cornhole likely spawned from horseshoes. By the way, who thought that giving children weighted projectiles with a pointed end was a good plan? Cornhole has replaced horseshoes at our family gatherings and appears to be the going trend. Along with so many other things I fondly remember, I fear this piece of our rural history is destined to obscurity as each generation passes.