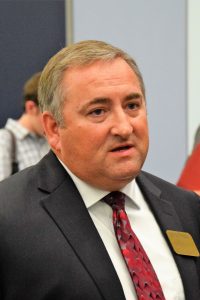 “it’s been a predicted storm that is now upon us” as he spoke at a press conference hosted by the Kentucky School Boards Association on Monday afternoon. Flanked by the superintendents of the organization’s Region Three, he said the pension reform proposal is a “decision that will impact tax payers, school districts, classroom teachers and ultimately every child that walks through the doors of our public schools.” Matthews is president of the Kentucky Association of School Superintendents.

Matthews was among a handful of speakers who issued a call to attention to the public to understand the potential impacts of Bevin’s proposed legislation that was partially revealed last week. The full proposal has not been released but rather a series of condensed highlights.

Warren County Schools Superintendent Rob Clayton borrowed the Bevin administration’s familiar United We Stand slogan to proclaim, “United We Stand here today because it’s the moral and ethically right thing to do unlike the Governor’s pension proposal. A promise is a promise. No, Governor, this is not keeping the promise.”

“I and my colleagues behind me will take a stand to protect our children and our community. In fact, they are counting on us to do so,” Clayton said. Warren East High School in Clayton’s school district hosted the press conference and the meeting of the KSBA afterwards.
Echoing Clayton’s comments, Matthews said the proposed overhaul of Kentucky’s retirement systems will “impact tax payers, school districts, local schools, classroom teachers and ultimately every child that walks through the doors of our public schools.” Matthews said Barren County Schools and others would “see a mass exodus of our most experienced staff if the proposed legislation passes.” 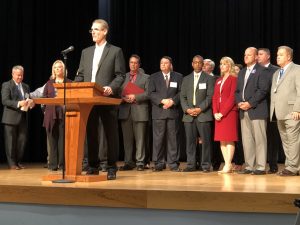 Specifically, Matthews said Barren County Schools has more than a fourth of current certified staff eligible for retirement in the next 7 years. “We have over 50 employees who could retire this year.” Under the plan, local school districts would see a 50-percent increase in classified contributions which would mean an increase of just under $700,000. “This means less money for our local schools, classrooms, teachers, and students. Our strongest teachers leaving the profession before their time. Deep cuts that reduce money directly spent on students,” Matthews said.

“In Barren County, our entire high school math department could retire today creating a terrible deficit in meeting the academic needs of students, which in turn means we aren’t meeting the economic needs of our state.” As for future teachers, Matthews said “local universities are reporting a 30-percent decrease in teacher education enrollment. How can we expect to draw qualified people into education if they perceive a lack of support from our state officials?” 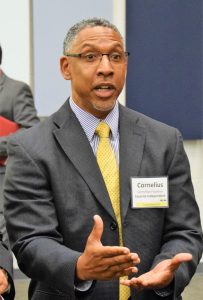 Flynn said that proposal regarding retirees would remove some of the most experienced educators from the substitute teacher pool. Flynn explained that public schools invest four days per year in continuing training for teachers and over a 27-year period, the cost of in-service training amounts to nearly $60,000 per teacher. He said removing such highly skilled staff from substitute teaching would be a waste of valuable resources. 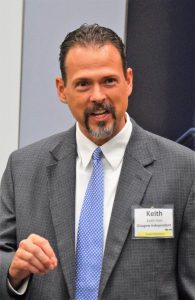 Another issue brought forth by the superintendents is the proposal to free cost of living adjustments on current and future retirees. Matthews said such a freeze would “potentially decrease the current average retiree’s income by as much as $75,000 over the course of a lifetime.” Classroom teachers who plan to retire in the next 5 years will lose up to $48,000 over each 10-year period of their retirement, Matthews added.

Speaking on behalf of superintendents across the Commonwealth, Matthews said “education is an essential part of the pipeline to growing Kentucky’s economy. We all know public education is the great equalizer that gives our children the hope for social mobility and a bright future. We all know that qualified teachers are the greatest predictor of a child’s academic success. As we work to solve these problems, we need to ensure the steps we take will not dim the bright future we all want for the children of the Commonwealth.”