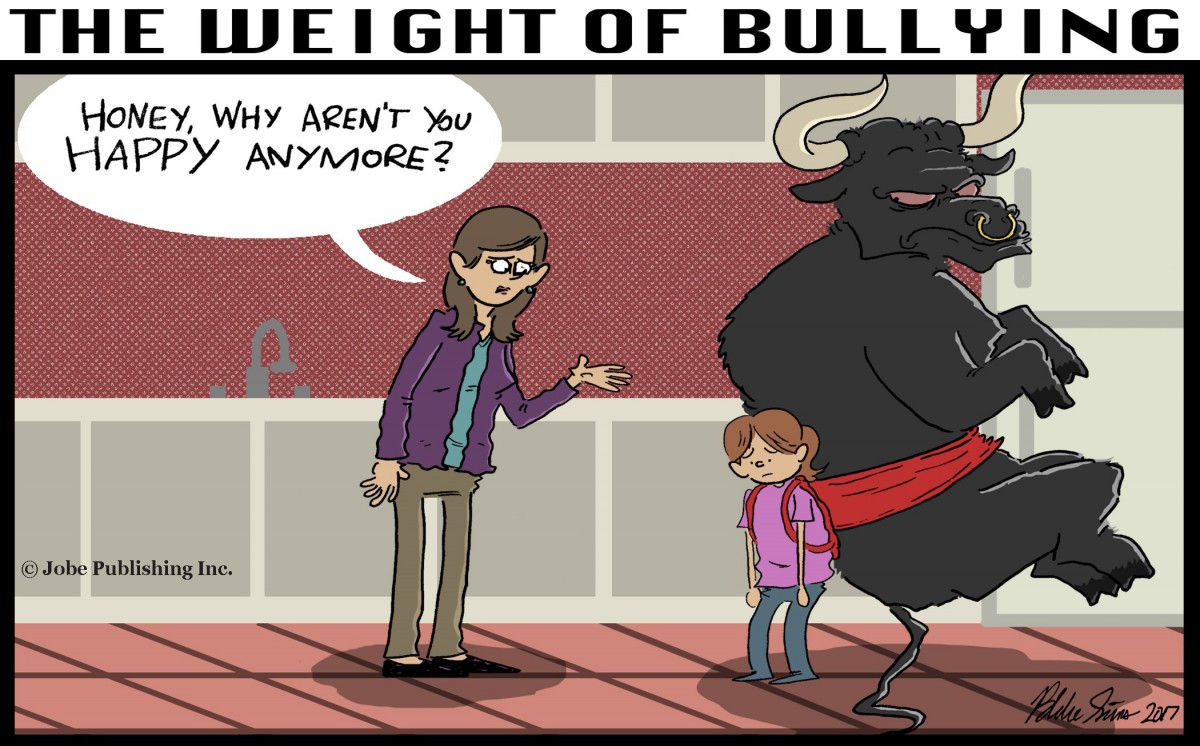 Adolescent and school-age bullying is a serious concern that affects the lives of all children — those getting bullied, those doing it, and those in close vicinity.

Going to school can be fun, but as depicted by the cartoon drawn by our political cartoonist Blake Sims, bullying can be a terrible burden to carry.

School should be about learning and building a foundation for success in both higher education, careers, and social interaction. Such lessons learned are the groundwork for how young people will handle difficulties as an adult.
No matter the background or home situation for a child they are all dealing with what they deem most important, making new friends and perhaps losing an old one.

They are beginning to navigate their way in the world for the first time, and allowing a single bullying scenario to play out affects all of our children to some degree, but for the victim child the pressures are magnified exponentially.

School-aged children want to be liked and being subjected to taunts, teasing, and mockery depreciates a child’s learning environment by adding anxiety about what could happen next.

If you combine physical abuses and social media into the mix, then true fear and humiliation raises the stakes to a dangerous level.

A parent can see physical bruises and they should look for them. But with social media harassment coming from texting or other forms of media, the hurt is not seen. It is inside pain and anguish. I encourage parents to monitor social media and engage their students in conversations regarding bullying. I also suggest quizzing friends of your children as this always helped me get the answers I was seeking.

With my son there were two occasions in which the discussion of bullying came up. I remember getting a call from Morgantown Elementary Principal. He asked me to come to his office the very last day of school. As I walked to the principal’s office I passed my son sitting in the lobby outside the door. He said to me as I was lead past him; “Dad, I used words first.” This was my son’s way of saying he tried to get along with another boy, even used his words to say so but it just wasn’t possible.

Sure enough, the principal detailed a scenario in which a young fella had picked on others over the year but on this day three classrooms came together and he just happened to make his way to my son. I’m sure this young man will give a little more respect to a man who says, “I would rather be your friend but …”

I asked if my son was a bully and was told, “no, at this age they seem to want to determine the pecking order and your son isn’t a trouble maker but he is one you don’t want to start any trouble.”

Another memory came within the first few weeks at South Green Elementary in Glasgow and my son shared that three boys were confronting him together because he was the new kid. Unannounced to my son, I visited the principal and I was told; “Those boys are good boys, never a problem and actually two of them have teachers as parents.” I’m sure you know how this might make any parent feel and can probably imagine the tone of my response.

It seems not long after this meeting those same boys became my son’s best friends. My son found that using “words first” and making it clear where he stood in a quiet but serious tone defused this situation and it seems those boys would rather be friends too.

I am no child psychologist nor will what works for one family work for another. Only a parent might know their child’s capabilities however if struggling I’m comfortable there are counselors who can help. My approach came from having grown up on the wrong side of the tracks, no father to offer me advice and remembering the terrible feeling of not standing my ground once as a boy. I didn’t want this for my son and I’m confident he never had it.

I remember discussing the issue with my daughters as teens and I asked them to write me a letter to the editor describing bullying. This exercise often worked for them because they liked to pretend to be employed at the newspaper. I remember reading and thinking they were astute in understanding bullying is not just pushing and shoving, but that laughing at jokes made about someone else is bullying too.

I have often thought a great assignment for every middle school student would be to put their thoughts regarding bullying in writing, read them out loud in class and submit to the hometown newspaper for publishing couldn’t hurt to start those troubling years with some focus.

I asked our editorial team weeks ago to delve into this subject and you will find their work in all our newspapers this week. Our goal is to detail the proper method for a parent or guardian to log and monitor a complaint to protect their child, and to encourage all of us to take an active role in protecting our community.

Looking for someone to blame once a problem has consumed is too late; accepting responsibility is the only way we can save our families from this terrible fate and as for this community publisher; I’m here if you need me.