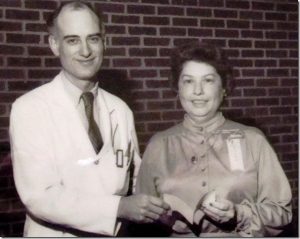 A fundraising effort that began with an impassioned plea from one Extension Homemaker to her peers has positively impacted Kentucky women and the University of Kentucky for the past 40 years.

The late Virginia McCandless, a Barren County Extension Homemaker, and Dr. John van Nagell with the UK Markey Cancer Center started the ovarian cancer research fundraising effort in 1977. At the time, McCandless was state health chair for the Kentucky Extension Homemaker’s Association and diagnosed with ovarian cancer. She approached Dr. van Nagell, her gynecologic oncologist, about ways to raise awareness about the cancer—often known as the “silent killer of women,”—and funds for UK’s research program. Their goal was to raise $1 from each member of KEHA, which then had 31,000 members. While in the final stages of her battle, McCandless approached her fellow homemakers with the idea at the association’s state meeting.

Her idea took off. Today, members of the association continue to support the program, which became the ovarian cancer screening program in 1987, and have contributed more than $1.4 million since the effort began. While their contribution varies each year, the state’s more than 14,000 Extension Homemakers have given between $40,000 and $50,000 each year for the past decade. Their donations help cover various expenses that come with running the program, including everything from equipment upgrades to unexpected repairs to the program’s mobile screening unit.

“There’s been a real commitment and a real feeling that they can make a difference if they target some of their efforts on fighting ovarian cancer,” said Kim Henken, the UK College of Agriculture, Food and Environment’s advisor to the association. “Their work really goes beyond fundraising. They participate in the screening program, which helps to further the research. They encourage the screening program, and they do local educational programs about ovarian cancer.”

Brenda Leftwich, a third-generation Extension Homemaker in Barren County, remembers McCandless from her childhood. She also had another friend who died from the disease. She encourages her friends to be screened and continues to raise funds for the effort.
“When my best friend and I turned 50, one of the things we promised each other was we would go for a screening,” she said. “To me, it was a no brainer because it is free.”
The screening is free to any woman who is over 50 or over 25 with a family history of ovarian cancer.

For some members like Mason County Extension Homemaker Nadine Barker, the program means so much more. In 2004, Barker was diagnosed with a tumor on her ovary during a routine screening.

“I credit the screening with saving my life,” she said. “I have promoted it to a lot of people in my county as well as to my family.”
Research participants like Barker agree to an annual screening. The UK research program focuses on proving that ovarian cancer can be caught in an early stage when it is highly treatable.

“Right now, we have over 46,000 women in the study, and they come from every county in Kentucky,” said Dr. Ed Pavlik, director of the screening program. “We have given over 460,000 free screenings. We’ve done surgery on around 600 women and found malignancies in 150 women. Benign tumors make up the rest.”

Since it is free, it has helped women including Patty Amburgey, a Letcher County Extension Homemaker, receive the important medical screening. Amburgey did not have insurance when she started participating in the research program 19 years ago, but with a family history of gynecological cancers, she knew screening was important. She participates in the county’s annual fundraising events for the program and comes to Lexington for her screening each year. She usually comes with a van full of fellow Letcher County women in one of the trips organized by the Letcher County office of the UK Cooperative Extension Service.
“It’s quite a drive, but we are taking care of our health,” she said. “We enjoy each other’s company. It’s a good day.”