In the first quarter of the 20th Century, Kentuckians embraced the last living Confederate veterans as treasured heroes of the past and found a variety of ways to honor their legacy even if it was a somewhat romanticized view of “The Lost Cause.” Twenty-first century minds have found such history troubling and difficult to understand, let alone respect, as evidenced by calls for removing various Confederate-related memorials. Without debating the touchy topic, it benefits contemporary Kentuckians to refrain from judging 19th century individuals using 21st century standards; instead, it’s an opportune time to explore the history of how Kentuckians chose to pay homage to the defunct Confederacy. Two outstanding examples occurred in the month of October. 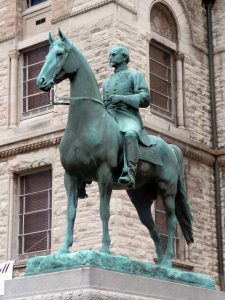 On October 18, 1911, thousands of spectators filled the heart of downtown Lexington for the unveiling of the equestrian statue memorializing Confederate Gen. John Hunt Morgan. Nearly everyone familiar with Morgan knew that his preferred steed was his favored mare, “Black Bess,” who was descended from a Kentucky saddlehorse and a Thoroughbred mare. When the United Daughters of the Confederacy selected Italian-born sculptor Pompeo Luigi Coppini to create the likeness of Morgan astride his horse, the trouble began.

Coppini’s first model wasn’t even close to resembling the diminutive Thoroughbred but instead a hammered-headed creature that would embarrass any Kentucky horseman. One Lexingtonian so harshly criticized Coppini that the sculptor challenged him to a duel which was prevented by Judge James H. Mulligan. Coppini’s second model was more pleasing but he insisted that a Thoroughbred mare was simply too small for an equestrian statue of heroic proportions.

In 1908, Coppini built a studio on Bellaire Avenue off W. Sixth Street in Lexington and began studying Thoroughbred horses on local farms. When he began to create Morgan’s figure, the artist used a barrel turned on its side for Hogan Yancey to sit astride; when Yancey wasn’t available, Wallace Muir filled in – both selected for their height and broad shoulders reminiscent of Morgan (and both young men ultimately became respected Lexington lawyers). 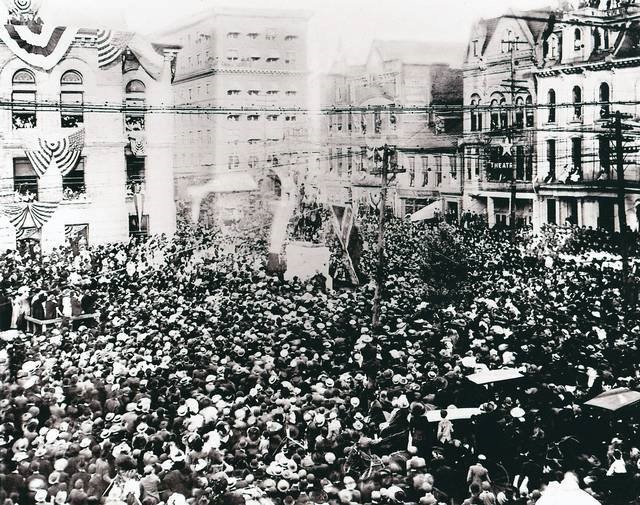 THOUSANDS OF SPECTATORS filled downtown Lexington for the unveiling of the John Hunt Morgan Memorial in 1911.

Contrary to dramatic tales, the committee knew in advance that Morgan would be astride a stallion but they didn’t educate the public to understand Morgan wouldn’t be sitting on “Black Bess” nor the gender of the horse. When October 18 arrived, Miss Henrietta Hunt Hanning and Miss Frances Breckinridge Steele, granddaughters of Confederate Generals, cut the ribbons securing the drape over the monument to reveal Gen. Morgan astride an anatomically accurate stallion. Over the past 100-plus years, the controversial appendages have been the object of thousands of college students’ pranks, most including royal blue and white paint.

In reality, Gen. Morgan rode as many as ten different horses during the Civil War. “Black Bess” was lost in May 1862 when Federal troops surprised Morgan’s men in Lebanon, Tennessee and the troops had to flee across the Cumberland River. Morgan and his scout, Tom Quirk, tried in vain to find “Black Bess.” When Morgan was killed in Greeneville, Tennessee in September 1864, his last horse was shipped by train to Glasgow, Kentucky but research has failed to reveal who claimed the horse. 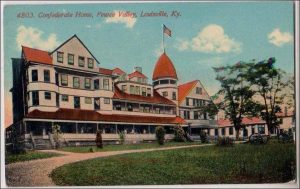 THE KENTUCKY CONFEDERATE HOME in Pewee Valley, Kentucky was the final home of more than 700 Confederate veterans.

Outside the tranquil village of Pewee Valley and history buffs, modern Kentuckians know little about the Kentucky Confederate Home that opened on October 23, 1902 in what had been built as the Villa Ridge Inn. Reacting to the advocacy of ex-Confederate Bennett H. Young, National Commander of the United Confederate Veterans, on behalf of his aging comrades who could no longer care for themselves, the Kentucky General Assembly unanimously approved the building of a veterans home specifically for former Confederates. The UCV and the United Daughters of the Confederacy raised $16,000 to aid the effort and the result was a facility that provided not only a home, but a hospital, nursing care, food, entertainment, and religious services for as many as 350 veterans at a time.

Over the course of the Kentucky Confederate Home’s existence, some 700 former soldiers were cared for provided they met the requirements: a former Confederate soldier, a resident of Kentucky for at least the past six months, be mentally stable, and have no problems with alcoholism. A devastating fire on March 25, 1920 destroyed the main building, the infirmary, and the laundry. The few veterans living at the home were cared for in other part of the facility until it was closed by the legislature on March 17, 1934. At its closing, the last five veterans were transferred to the Pewee Valley Sanatorium for the remainder of their days.

Confederate veterans with no family were buried in a nearby cemetery, a burial ground that also welcomed interment of veterans who preferred to be buried among their comrades. In total, 313 of the veterans were buried at the site which contains a zinc monument to the Confederate dead. The original gates at the entrance to the Kentucky Confederate Home are all that remain, although they have been moved about a mile away to the cemetery. 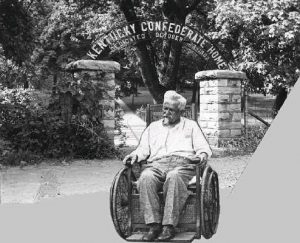 The last Confederate veteran cared for in Pewee Valley was the Rev. Alexander N. White. A native of Mississippi, White left his family farm at age 17 and enlisted in the 42nd Mississippi Infantry. After the war, he attended seminary and became a Baptist preacher, married, and moved to Kentucky in 1875 where he pastored a congregation in Paris and later in Carlisle. Becoming a resident of the home in 1903, White scheduled visiting ministers to conduct worship services at the facility. White became a resident minister of sorts for inhabitants of the home, faithfully visiting the sick, comforting the dying, and frequently conducted funerals for the deceased. He also wrote obituaries for hundreds of the Confederate veterans, frequently helping men of little accomplishment review their lives. Each of White’s obituaries included the war record of the deceased which always ended “he was no less loyal to his convictions as a soldier of Jesus Christ.”