If you haven’t cut and housed tobacco or hauled in hay on the hottest days of summer, you just haven’t lived life to its fullest. Of course, I have my tongue firmly in my cheek as I’m making this statement. I’m really not sure which of these farm chores actually holds the record for being the hottest, dirtiest, most back-breaking work, but either of them would make a dip in the cool, clear water of Peter’s Creek most desirable.

There is no need to waste your hard-earned dollars on a sauna when you can effectively sweat out all your impurities while working in the hay field. By the end of the day, I had salt stains from sweat on all of my clothing, including my hat. I had sweat bead necklaces in rows on my neck and when I removed my cap and the handkerchief that I wore over my nose and mouth to filter out some of the allergens I inhaled, I looked much like a raccoon. Like me, my brother has hay fever and allergies and told me that any time he was actually paid to haul in hay, he spent more money on doctor bills and medication for allergic sinusitis and bronchitis than he earned. 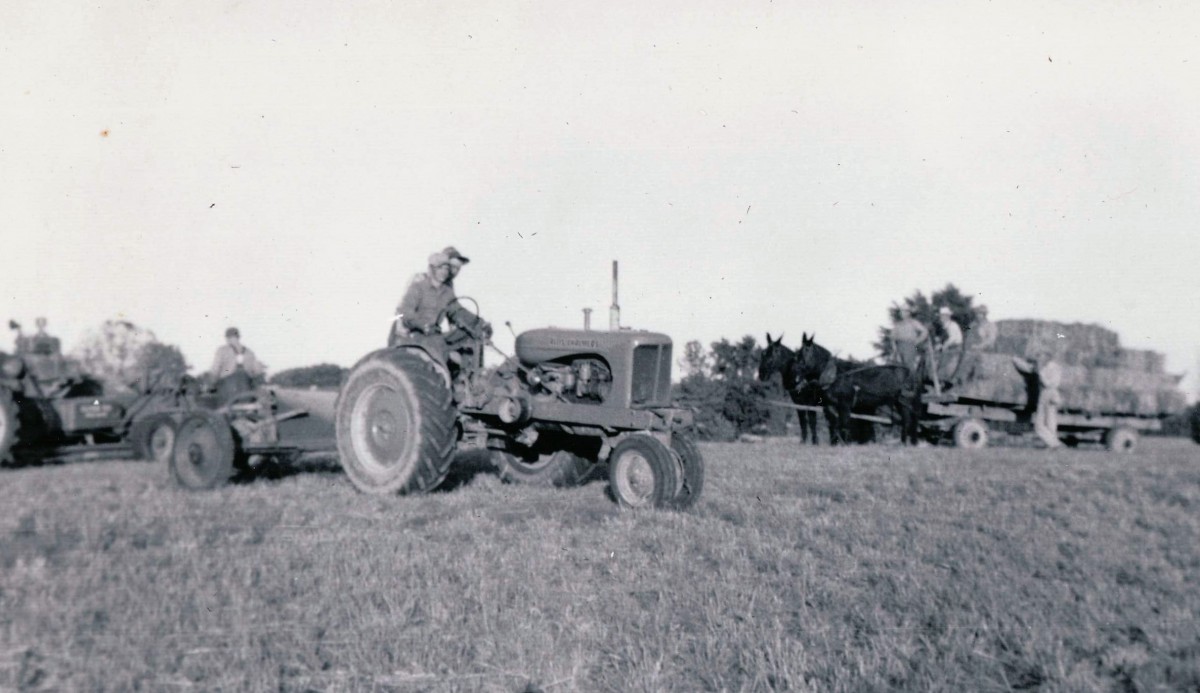 Getting the hay from the field into the barn needs to be timed perfectly as you cannot allow the hay to get rained on at any point in the process. You really need a window of three or four days of dry weather to get the hay cut, cured (dried), baled, and in the feed barn. A mowing machine is attached to the tractor to cut the hay, of course; prior to tractors, a mule or horse drawn machine was used. After it is cut, the hay is left to dry a bit in the field as baling hay that has too much moisture can ruin the hay, causing mold or even spontaneous combustion of the compacted bale. Ideally, the machine called a hay rake can be used to “turn over” the hay two or three times before it is baled to completely get the hay dried out. The drying process needs at least two or three days of hot, dry weather to complete.

When the hay has sufficiently dried, the hay is raked into windrows by the hay rake to get it ready to bale. For the sake of efficiency, a two-tractor operation is employed in this process, one with a hay rake, the other with a hay baler attached. After the raking is completed, the rake is unattached and a hay wagon is attached to the tractor. This is where the back-breaking part of the job begins. 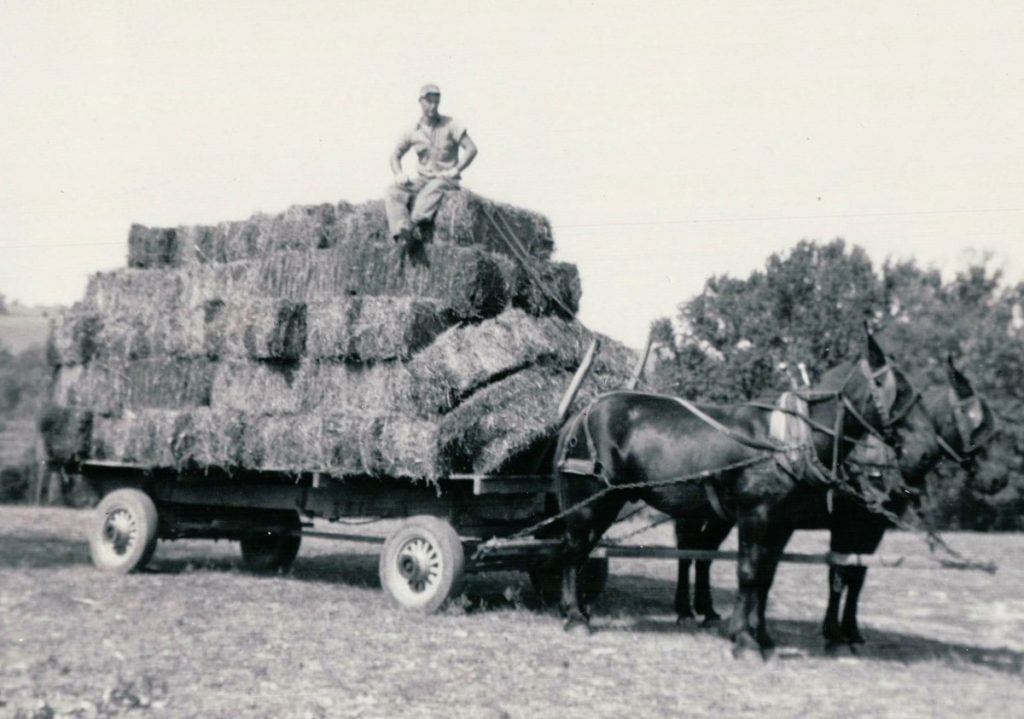 UNCLE EVERETT POWELL “showing off” on his wagon overloaded with hay. Photo courtesy of Joyce Buster.

The baling may still be going on in another part of the field, as the hauling gets underway. Usually two or more men walk alongside the wagon as it is pulled near the bales sitting in the field. While the two men on the ground are tossing the hay bales on the wagon, a third man, the stacker, rides on the wagon to stack the bales neatly on the bed of the wagon. If everything is timed efficiently, the baling is completed in time for that tractor to hook to another empty wagon, just as the first one is stacked at its capacity and can be smoothly transitioned into the loading process. The full wagon is then taken to the feed barn and another empty wagon grabbed and brought back to the hay field. Keeping a steady supply of empty wagons to the field is critical to the efficient use of the laborers, however if you’re one of the loaders or stackers, a delay would be welcome to allow for a bit of a breather.

When the last bale is loaded on a trailer, everyone piles on for the final trip to the feed barn. An elevator is placed in front of the barn to carry the bales to the loft access. Handlers place bales on the elevator while others are in the loft grabbing the bales and stacking them in the barn loft. If we didn’t have an elevator, the tallest or strongest man just tossed the bales into the loft from the wagon. This process is repeated until all wagons are empty and all the bales are neatly stacked in the loft.

Baling hay in this method is very labor intensive and “back in the day,” neighbors and relatives moved from one farm to another helping each other to get their hay in. Nowadays, finding affordable laborers is difficult so the trend has become to roll the hay into huge rolls. Done in this manner, the manual labor is reduced as most of the operation is done completely by equipment and attachments to tractors.

As with all farm work I performed in my youth, I was always one of the manual laborers, never having the much easier job of driving one of the tractors. Maybe I was always considered to have more brawn than brain and it was an efficient use of my abilities. How does that old saying go, “always a bridesmaid, never a bride?”