Kentucky has lent numerous native sons and daughters to sister states throughout the country. Many are familiar with Gov. Preston H. Leslie of Glasgow who served both the Commonwealth and the Montana Territory while fewer may realize Lexington-born Missouri Sen. David Rice Atchison may have been President for a day and whose name is the part of the Atchison-Topeka & Santa Fe Railroad. Unless you’re a student of history focused on the communities along the Ohio River, you may have missed the story of Eli Houston Murray.

On October 6, 1880, the Cloverport native was appointed Territorial Governor of Utah by President Rutherford B. Hays. While still a teenager, Murray enlisted for service in the Union Army in the Civil War. Near the end of the war, Murray was brevetted to the rank of Brigadier General. Returning to Kentucky, Murray earned his law degree from the University of Louisville, later marrying and moving to Utah to become a newspaperman. 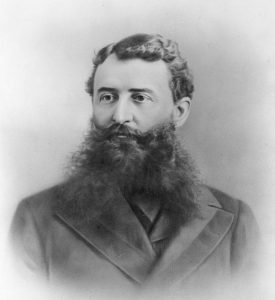 Soon after his appointment as Territorial Governor, Utah held an election to determine the territory’s lone congressional delegate. George Cannon, a Mormon, had 18,567 votes compared to Allen G. Campbell with an unimpressive 1,357 votes. Before the election was certified, Campbell supporters protested that Cannon, a native of England, was an un-naturalized alien. Further, they protested that Cannon’s practice of polygamy was against the law and against the oath of office.

Gov. Murray certified the election with Campbell as the victor, contending that Cannon was not qualified. At the time, only Congress could decide on a Congressman’s qualifications and Cannon convinced the House of Representatives to accept him and began drawing the salary. However, Murray and Campbell travelled to Washington, D.C. to dispute the ruling. After more than a yearlong battle, the House of Representatives ultimately rejected both Cannon and Campbell in 1882. Cannon was disqualified because he practiced polygamy and Campbell because he had fewer votes.

Murray was replaced as Territorial Governor by President Grover Cleveland in 1886 after which he moved to San Diego and resumed his career as a journalist. He eventually returned to Kentucky, choosing to live in Bowling Green where he died in 1896.  Murray and his wife are buried at Arlington National Cemetery.

Fast-forward to the summer of 2016, when Eli Houston Murray suddenly made the news more than 120 years after his death. An Arizona auction house marketed for sale Murray’s German-made sword, presented to him by his troops in 1862 after the Battle of Murfreesboro. According to tradition, the soldiers of his regiment each contributed a dollar for it, which at the time, cost $1,200. 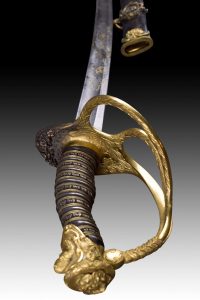 In 1938, Neil Murray, along with his wife and children, visited Hardinsburg, Kentucky. When Neil signed the guest register at the hotel, the clerk asked if he was related to Eli Murray, to which he responded that Murray was his father. The clerk told him he had something that belonged to him. Momentarily, the clerk returned with the sword and Murray’s Civil War uniform along with the story that his father had been a guest at the hotel when the war ended and that he took off the uniform and sword and gave them to the hotel proprietor saying he never wanted to see them again.

Neil Murray took the sword and uniform back to his home in Glendive, Montana; the sword passed through the family until a relative chose to sell it in 2016.