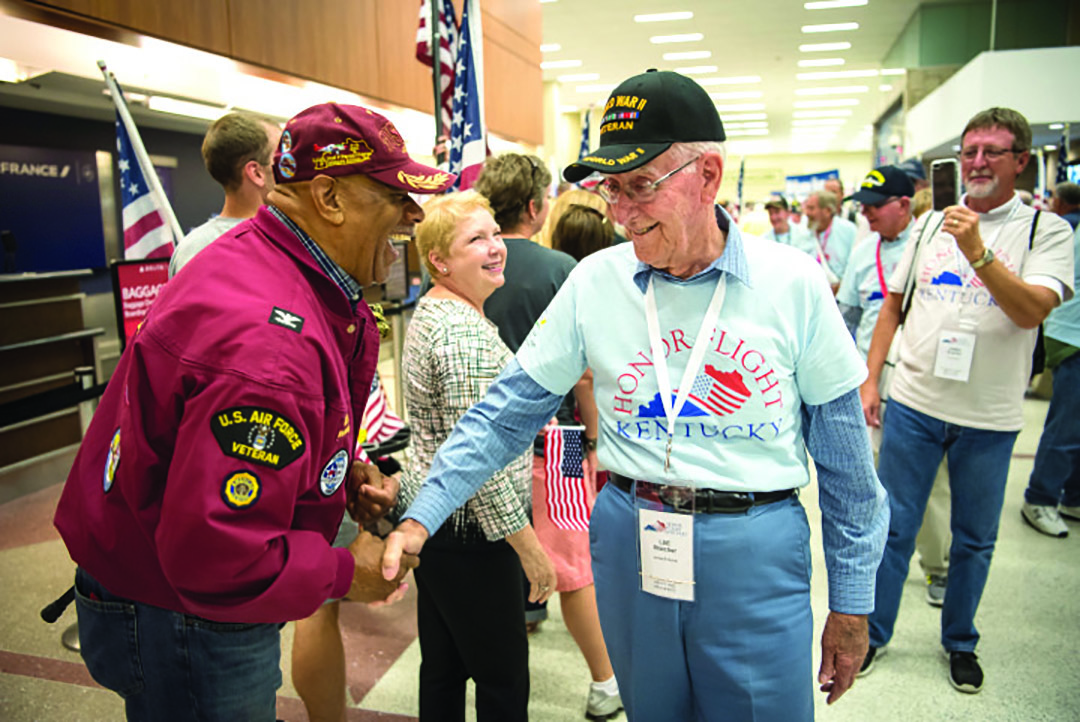 Crowds of people welcomed Lee Bratcher and other veterans home at the Bluegrass Airport in Lexington on September 16, 2017. Mr. Bratcher, who served as Special Police during WWII, was sponsored by Farmers RECC. Photo by Tim Webb/Submitted

Special to the News-Herald

The veterans participated in a one-day tour of war memorials in the nation’s capital. This was the seventh Honor Flight sponsored by Farmers RECC and Kentucky’s Touchstone Energy Cooperatives. The mission was coordinated by Winchester-based Honor Flight Kentucky.

As a bagpipe band led the returning veterans through the Lexington terminal, more than 1,500 family members and patriotic citizens waved “Welcome Home” signs and shook their hands.

Throughout the day, people greeted the veterans with smiles, requests for photos and many thanks for their sacrifices in the cause of freedom.

When the veterans arrived at Ronald Reagan Washington National Airport that morning, a gauntlet of cheerleaders, football players and other citizens clapped as a chorus from the U.S. Military Academy sang patriotic songs.

After boarding three buses, a police escort cleared highway traffic and took them directly to the Air Force Memorial and the National 9/11 Pentagon Memorial.

At the Tomb of the Unknown Soldier in Arlington National Cemetery, the group watched the changing of the guard and participated in an emotional wreath-laying ceremony.

The day was made even more special by Mr. Bratcher, as he turned 91 on the day of the Honor Flight.

“They announced that morning that it was my birthday, so everyone has come up to wish me a ‘Happy Birthday’,” he said. “I had an awesome day.”