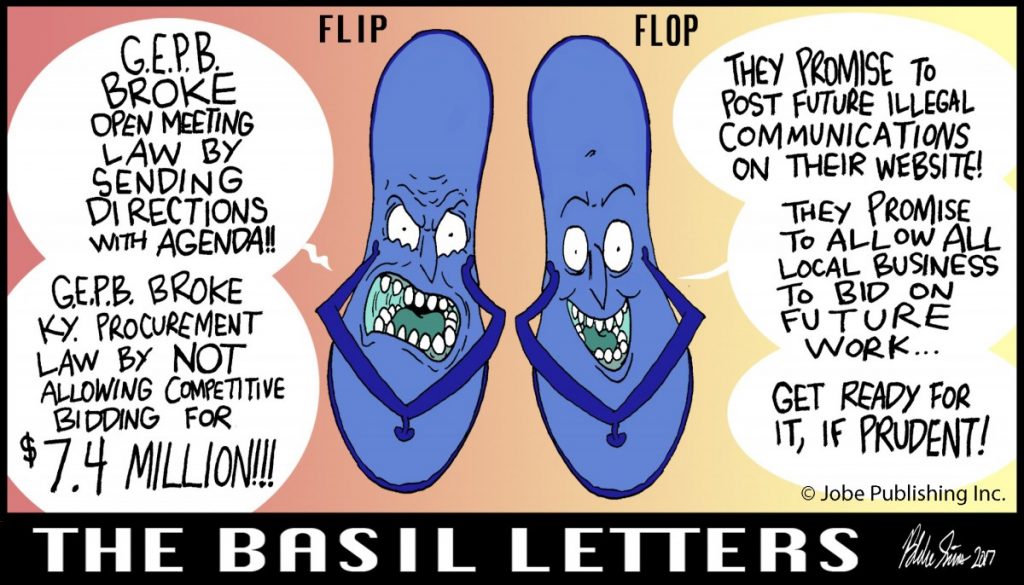 This past week I was fortunate in having my personal schedule unexpectedly freed up with a board retreat postponed and with this new-found pocket of time I chose to help our editorial team with some news coverage.

Having been notified of the annual Barren River Area Development District meeting I almost passed on it but was informed two friends would be honored, so I chose to attend. Early in my career, with only the Butler County newspaper I would attend these meetings and always enjoyed them.

Soon to be 20 years ago it was nice to get away from the local routine of hometown newspapering and honestly it was also nice to enjoy a lunch or dinner with our city and county officials and not have to discuss issues or worry about who might accuse us of being together for some political reason.

Back in 1998, I was no different than I am today. If a politician did something nice we would report it and if they did something stupid we would probably write about that as well.

But back then I was aware that because I was new to the community and somewhat younger I was given leeway and perhaps even some respect. Never was I accused of some of the dastardly things I am today. As a matter of fact, more times than not Morgantown Mayor Charles Black or Butler County Judge David Martin would save me a seat and one might ask, “hey hoss, you want a piece of pie while I’m up?” I seem to remember delivering a piece or two to the one with the bigger appetite back then.

Fast forward to today’s BRADD meeting and I am blessed to have newspapers in six of the 10 counties served by the district. One would think anyone in charge of such a group would want to have a good relationship with such a company but sadly not here in South Central Kentucky. Whether they like it or not much of their work is tainted by political infighting and the lack of cooperation that me, Mayor Black and Judge Martin could manage back in 1998.

This lack of cooperation could be felt inside this room and although most of the old players have managed to get themselves promoted up and beyond as they were mostly political appointees just racking up their retirement years or politicians themselves needing a little more pay to balance out their already wonderful benefits packages.

Today’s new players have been dealt a hand of secrecy and self-serving divisiveness we can only hope will be extinguished some day and only be possible if they can accept truth as nothing more than truth.

There were a few examples of city and county officials sitting with one another but for the most part I would have bet $100 that Mayor A wouldn’t be speaking with Judge-Executive A at any time during the afternoon. This is wrong on so many levels.

If they do nothing else this year other than what they did on this day they have by far exceeded many years in the past of good deeds by honoring two well deserving personal acquaintances and respected community leaders. Mike Nichols, the Hart County Attorney and David Dickerson our Secretary of the Cabinet for Public Protection accepted the top honors and each man left some of their personality with all those in attendance. Nichols complimented his county judge executive and anyone could see a great working relationship between the two. While Secretary Dickerson gave advice to keep working for what you believe in and was very humbled to be accepting the award carrying the name of a personal family friend, Tim Lee Carter.

I’m glad I was there to show my respect to these men, and the communities we serve together; but it also allowed me to provide a little mentoring to our newest staff reporter and rising star Rayna Glass.

It allowed me to share what I feel is my greatest newspapering skill, I could show her how to put aside other people’s problems with truth because in that room of course I have made a person mad a time or two which is common for people who try do make a difference. Sometimes you get it right and sometimes you miss the mark a little. I explained that in the political world often the story of missing the mark will overcast dozens of them getting it right.

I shared with her that if we allow the sneers or disrespect to affect our work or make us biased in covering the good they do then it discredits our ability to make a difference the next time we try to encourage them to vote in the best interest of the community instead of their political clique when a tie breaker is presented.

As I look back on my 20 years of covering news in the BRADD area without a doubt there is no person who earned more ink from my company than the late Morgantown Mayor Charles Black. Whether it was our late-night debates in my office after a city council meeting or our disagreements in how he broke ties and managed to overpower his council to create mindless “yes-men” to him giving me the honor to represent my new hometown as part of our Sister City program; he deserved every inch of space I gave him.

On the surface and inside the political cliques of local politics some might think I hated him and he hated me; but we knew better and on my next to last visit with him at the Morgantown Care Nursing facility I stuck my head inside his room and asked, “do you remember me Mayor.” With a smile he responded, “how in the hell could I forget you?”

Perhaps someday all of South Central Kentucky can do as Hart County Attorney Mike Nichols, Secretary David Dickerson suggested and what Mayor Charles Black, Judge-Executive David Martin and I realized long ago: strive to get along and never stop fighting to make our community stronger.